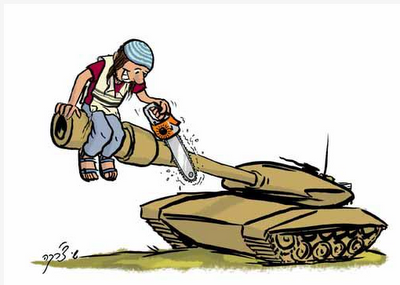 In response to the planned IDF demolition of a Shomron region outpost, "Ramat Gilad", dozens of Israeli teenagers broke into the nearby IDF Efrayaim Battalion HQ, puncturing tires on jeeps and lobbing paint-filled balloons at IDF jeeps. Earlier in the evening, a rock was thrown into the jeep of the Battalion commanding officer, Ran Kahana, which injured his deputy.

The above cartoon, by Shay Charka says it all. The teenagers who attacked the IDF fail to realize that they are first and foremost, hurting themselves. Their behavior is wrong and the violence is wrong. It damages our unity, it damages the IDF, and most depressing of all, gives our enemies reason to rejoice and point fingers at the violence and increases the likelihood of the destruction of Ramat Gilad.

The background: Ramat Gilad is a 10 year old, small community of about 10 families and 30 children located on a hilltop in the Shomron region -- on a clear day you can see from Hadera to Ashdod. The buildings of Tel-Aviv are clearly visible almost any day. The community was founded in memory of Gilad Zar, the security officer of the Shomron Regional Council, who was murdered by Palestinian terrorists -- shot at point blank range in 2001.

Gilad's father, Moshe Zar is a well-known and colorful character. Moshe is a longtime friend of former Israeli Prime Minister, Arik Sharon, when he served under him in the legendary "Unit 101." Moshe was wounded in the 1956 Sinai Campaign and lost his left eye as a result of his injuries. In 1983 he was attacked and stabbed by a group of Palestinians but survived.

Moshe purchased thousands of dunams of land in the Shomron from the local Arabs.

In 1982, Moshe Zar purchased 2 parcels of land from an Arab resident of Jinsafut. In response, the seller's neighbors beat him brutally. As a result, the seller refused to hand over the documents concerning the second parcel of land despite the fact that Moshe Zar had already paid for it in full.

He asked Moshe Zar not to back out of the deal and promised that he would not oppose cultivation of the parcel by Moshe Zar. This parcel has been cultivated by Moshe Zar since then, as evidenced by aerial photographs and by testimony of an Arab worker who plowed the land on behalf of Moshe Zar.

To this day no one else has ever claimed ownership of the land or contested the land's cultivation. No complaints were filed with the police, army or civil administration despite the fact that the area is clearly visible from Jinsafut.

In 2000, the largest Israeli flag ever created was unrolled on the hill, which then began being called Givat HaDegel. The flag was later burned by local Arabs.

Shortly after the murder of Gilad Zar in 2001, Ramat Gilad was founded. The first two caravans plus a double caravan for a Bet Knesset were placed with the approval of then Prime Minister Ariel Sharon and his advisor for settlement affairs, Yossi Vardi.

In 2003, a plan for 185 units on the slopes of Ramat Gilad was approved by the Housing Ministry. The plan received all the necessary approvals except for that of the Defense Minister, for whose approval we've been waiting for eight years.

In 2004 "Peace Now" petitioned the court to require the government to destroy Jewish settlements that were built on private Arab land. Moshe Zar was not invited to the proceedings. No one else claimed ownership. No Arab has any claim on the land.

The only complaint that has been presented to the Supreme Court, for Jews living on a hilltop in the Shomron is from "Peace Now." As a result of the petition, the government committed itself to destroying Ramat Gilad by the end of 2011.

Moshe Zar, has stated that he agreed to negotiate with the State after being assured that no hasty demolitions would take place during negotiations. "During the negotiation we weren’t informed what would be demolished, when we suddenly heard about demolition forces on their way to Ramat Gilad contrary to the promises made. Then, the Defense Ministry claimed untruthfully they knew nothing of the forces approaching Ramat Gilad." (INN)
Who gains from this violence? Peace Now and Ehud Barak gain from the settler violence, as it makes it far simpler to destroy Ramat Gilad.

The tiny minority of violent settlers fell right into a perfectly laid trap...and have made it far more difficult for the rest of us.

Jameel: If you seriously believed what you wrote, you would endorse MK Fuad Ben-Eliezer's comments this morning:

As per the demolition: the army should refuse to carry out political declarations by the court. As Andrew Jackson is quoted as saying "the supreme court has made a decision, let them enforce it"

I missed the early reports, and I'm getting only the fire and brimstone now. Can somebody explain how 50 civilians can calmly walk into an army base and wreak havoc? And not even get caught? Who is to blame for this breach of security?

Walid: Its obviously the Shin-Gimmel's fault.

However, once they came in, none of the soldiers or officers made any real effort to stop everything going on. At one point, one of the officers locked his weapon in his jeep and started to physically push the invaders out.

He wanted to ensure that no weapons were used.

moshe zar and the rest of the ramat gilad community should be able to stay in their settlement under palestinian rule. the idf should not be put in harms way protecting these nutters.

simon: Why is Ehud Barak so insistent in kicking the Zar family out of their homes?

Not justifying the right wing anarchists, but nobody reports that every Friday left wing anarchist stone IDF soldiers in various demonstrations. Secondly these are the same officers who don't do anything to the Arabs who are constantly stoning Jewish cars. Thirdly the hate that politicians and media people are spewing against settlers as a result of this anarchist attack is unacceptable and should be illegal.

Don't fall into the trap of 'need to condemn'. Something is very fishy right now, the price tag, the ministers calling for the Hilltop Youth to be declared a terrorist group, the 'right' violence getting heavy attention why the 'left' violence is ignored. All we need now is a swearing in ceremony for some secret Hilltop Youth unit that will stop all outpost eviction. I really hope that we will not find out that another gullible religious boy from Herziliah was given a gun.

On the other hand, the army is responsible for this. The high ranking officers have been brainwashed into thinking that the army is the operational wing of the government and the bagatz. These officers have let the army been dragged into politics and to be used as a political tool. When the 'settlers' feel they have nothing to lose, the army becomes a target as well.

These people are doing a great thing and will help Israel recognize the correct way to deal with the Palestinians.

The price tag movement is a discriminatory attempt to blacken the image of the settlers and the religious. No other population segment is singled out for the isolated incidents of small vandals and criminals. The seculars with their massive crime problem, the leftists and anarchists, the Arabs, and the Haredim as well have not received so much media attention. I do not condone 'price tag' but there is absolutely no reason to cooperate in the mass condemnations as well.

Your comment section is really scary.
Clearly many of your readers support some sort of rt wing violence, blame the army, or feel it's a left wing conspiracy to point out what these people did in the press.
As a point of protocol, if you're going to post a condemnation, just post those 1st 2 paragraphs. The rest is more of a legitimization of why the attacks happened.
Just one man's point of view.

The first 2 paragraphs were a clear cut condemnation of the violence.

The rest of the post was the background. I don't see how you can view the background as "legitimization". Barak, the Supreme Court, and Peace Now have acted atrociously -- and the background is important to understand the context.

Yet it is far from a legitimization.

Anon, rationale does not mean legitimization.

I heard an interesting round table on Israeli radio, though I couldn't tell who was talking. One fellow, I think a Haredi one, mentioned that every population sector has kids on the edges and also mentioned that in Israel, the authorities only react (or not react) to force. The whole government is afraid of touching the Mugrabi bridge in case it might incite some religious war in Israel or worldwide, the whole country knows how strongly the Haredim are willing to fight for modest advertisements in ceratin areas, graves, and Shabbat, and it seems that the 'settlers' and fans are creating the boundaries so the government and authorities know the 'price' of taking apart more Jewish homes and making families homeless.

Frankly, the government should know that once it uses the 'destroy home' weapon, the other side has absolutely nothing to lose by fighting. This is not a threat, it's psychology 101.

To last anonymous
Jameel wrote it as it was. Emails, and beeper messages went out saying that the army was on the way.
People thought this would be Migron 2.
The problem of course was that it got out of hand.

We all condemn of course, but it is clear that there is some sort of double standard, allowing other sections of the population (arabs, hardeim, left etc), to do these sorts of things on a day to day basis without the same announcements about cracking down on them.