Netanyahu vs. Advocates of Civil War 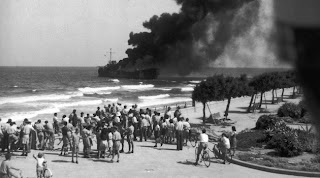 In perhaps one of the most important decisions in the past few weeks, Israeli PM Netanyahu has proven that he has the ability to make clear and decisive decisions, despite a cacophony of hatred from the ideological children of Ben-Gurion's decision to use deadly force against fellow Jews.

In 1948, Ben-Gurion ordered Yitzchak Rabin to open fire on the Irgun's Altalena ship carrying much needed weapons for the security of Israel, as it approached the shores of Tel-Aviv. Rabin then brutally ordered his troops to fire at the unarmed Jewish survivors swimming to shore, many of whom were Holocaust survivors. 19 Jews were murdered. Rabin never expressed any remorse for his actions -- in fact he relished in the murder, proudly saying in Washington DC when he was Israel's Ambassador to the USA, "we screwed them on the boat, and then we screwed them as they swam to shore." (source)

The proverbial artillery cannon which shot at the Altalena was named the "Holy Cannon"...and became a central theme in Ben-Gurion's legacy.

In response to the violence in the Shomron a few days, the ideological children of Ben-Gurion's "Holy Cannon" have called for shooting settlers.

Where is he, the Holy Cannon, when we urgently need him? Where are those who claim to be the students of Ben-Gurion, and those who carry on his legacy? --Yossi Sarid Haaretz, Thursday, 15/12/2011

Defense Minister Ehud Barak Wednesday morning said the legal possibility of classifying the "hilltop youth" group of young radical settlers as a terrorist group, saying "as far as their behavior is concerned, there is no doubt that we are talking about terrorists." (JPost)

And why do Ehud Barak, Ben-Eliezer or Yossi Sarid never call the weekly violent protests by Israeli leftists and anarchists are Biyalin or Yaalin, in which over 110 IDF soldiers and border policemen have been wounded -- the work of "terrorists"... and they reserve the use of their holiest of canons, and reserve the use of deadly force, only at settlers?

He accepts the recommendations of the internal security minister and the justice minister for dealing with far-Right activists rioting in the West Bank -- that they be tried in military court, but rejected a recommendation to define the Hilltop Youth as a terror organization. (YNET)

Defining "Hilltop Youth" as a terror organization is ludicrous (there is no such organization called the "hilltop youth"), yet the statement is clear: Jewish ideological violence against Jews is not terrorism. Violence is wrong and should be punished to the full extent of the law, but it is not terrorism. You don't shoot to kill other Jews because that leads to a civil war.

Netanyahu learned one lesson right from Menachem Begin, who said there should never be a civil war in Israel.

Unfortunately, Israel's Defense Minister Ehud Barak and MKs from the Labor party would be more than happy to mow down settlers with Ben-Gurion's "Holy Cannon."

"Blessed be the bullets that killed these enemies of Israel. The cannon that destroyed the Altalena is a holy gun, and should be placed in the temple."

I find it difficult to conceive of a Jew, much less a leader, speaking such vile words.

As I was driving to work on Thursday, I heard some of these tirades. I turned off the radio in disgust. These tirades should be kept as 5-second sound-bytes, ready to be recalled at election time.

Hopefully, some reasonable people can use this opportunity to learn how to not treat people with double standards, and what the correct way forward is.


As rav Tzvi Yehuda said /wrote, you have to treat the minorities with an abundant about of Chesed, for they suffer being a minority.

Could you imagine if a rabbi had said that the bullet that killed Rabin z"l is a "holy bullet"? It's not exaggeration to say that he would probably be arrested for incitement.

I'm not Heaven forbid suggesting that it was good to kill Rabin. I'm just pointing out the gross double standard exercised against the right.

From Ben Hecht's "A child of the century":

"Blessed be the bullets that killed these enemies of Israel", he (B-G) said. "The cannon that destroyed the Altalena is a holy gun and should be placed in the temple."

Barak may be assured that useful idiots will pray to his idol in this temple. The rest of us will spit on his corrections and keep the truth alive. One of victimd murdered by order of B-G was heroic Abram Stavsky who will always precede B-G on pages of spoken Truth.

The real reason for Altalena affair and B-G hatred of Irgun in general and people of Stavsky stature in particular was in fear to loose power in even field. He didn't want even field. And he was ready to kill fellow-Jews to slant it.

It's the same reason that make power hungry Left to call for blood now. They will never resolve the conflict with Arabs in any meaningful way while clinging to power - to slant the field.