Israel's Contingency Plan - An Alternative to the Palestinian Authority 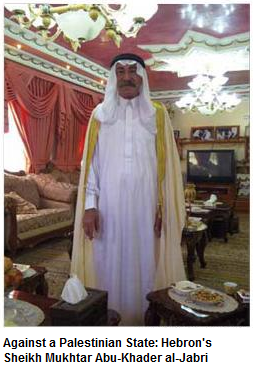 Under this plan, supported by some of the government's ministers, Israel will establish an autonomy or Arab autonomous regions in Judea and Samaria, in response to unilateral moves by the PA which breach existing agreements.

Possibilities [of breaching agreements] include [the PA] setting up a joint government with Hamas, or returning to the track of unilateral declaration, as threatened by the PA in September.

The linchpin of the plan is based on Hebron's Sheikh Mukhtar Abu-Khader al-Jabri, who had long challenged the PA and even controls security forces. In recent years, al-Jabari cultivated his contacts with Israeli officials, including settlers. In this context, three months ago, he participated in a secret meeting in Tel Aviv which discussed the possibility of alternative forces that could replace the PA. The meeting was held at the home of former minister Rafi Eitan, who has longstanding ties with al-Jabari clan and other independent forces in Judea and Samaria. Also in attendance were Cabinet Minister Yisrael Katz, a representative of the General Security Service, historians, experts in Palestinian society and figures close to al-Jabari.

At the meeting, Al-Jabri presented details of his worldview that rejects the establishment of a Palestinian State -- he outlined his support for the establishment of an autonomous region which would rely on the State of Israel, and would be free of terrorism. He clarified that he, his staff and especially the Palestinian population are interested in improving their financial situation which greatly deteriorated due to PA policy. As an example, he noted that the PA completely destroyed the Hebron-area marble industry, many of whom made ​​their living from it in the Hebron mountain area, by taxing marble exports. He clarified that in addition to him, there are other area leaders that support his approach against the PA, if they knew that Israel would agree to cooperate with them. "I am not your collaborator. I am not Antoine Lahad or Bashir Gemayel, but I need to know if we act together, you will agree to recognize us and cooperate." To this end he asked that Israel will agree to issue identity cards to him and the rest of the population.

At this stage of the meeting, he passed the ball to the Minister Katz, who is considered close to Netanyahu. Those present at the meeting imply that Katz was represented Netanyahu's position. Katz made ​​it clear that he would not in any way grant Israeli citizenship to residents because it contradicts the basis of the Zionist idea. However, he noted that in the event that the PA violated the agreements, Israel would be liberated from them. And so "if there will be a unilateral move, we will evaluate recognizing them."

Later in the session, other aspects of the idea were discussed. 'Makor Rishon' learned that details about the meeting were transferred to Defense Minister Ehud Barak, the GSS and the National Security Council. A senior official in Jerusalem revealed that at one point the idea started to wane under heavy pressure and explicit threats by PA to al-Jabari. With the process slowdown at United Nations [of unilateral statehood], options for alternatives are now off the table. However, the developments over the last days which show a serious effort by Abu Mazen to establish a joint government with Hamas, raises anew the need to examine alternatives to the PA. "If Abbas goes to Hamas, we can definitely establish an autonomy," the senior official said.

Minister Katz yesterday confirmed the information and expressed support for the idea. He said that "if there is a change in the current situation and the PA will break the dishes, I'll lead an Israeli initiative to recognize the autonomy of this kind. This seems a correct and realistic response."

In the context of "internal Palestinian unity", there is a significant meeting in Cairo taking place today between PA Chairman and Fatah member, Mahmoud Abbas, and the head of Hamas, Khaled Meshal. Abbas would like to establish a joint government with Hamas, but is under heavy pressure by the Americans and Europeans. European Union Ambassador to Israel, Andrew Standley, stressed yesterday that the EU "stands with its full weight on the demand that Hamas will fulfill the Quartet's conditions" (recognizing Israel, abandoning terrorism and recognition of agreements between Israel and the PA). He made it clear that any other publication [of an alternative EU policy] is a "fabrication", as he put it. At the same time the U.S. gave Abbas a clear threat that if he establishes a unified government with Hamas, he would lose the budgetary and political support of Washington. This was made very clear to him yesterday by deputy U.S. secretary of state, William Burns.

Foreign Minister Avigdor Lieberman made it clear yesterday that "if a Hamas and Fatah unity government is established, and it does not sharply and clearly, without reservations or vague statement, agree to the Quartet's conditions -- Israel will not recognize it, nor conduct any dialogue nor transfer it one shekel." Lieberman said that "PA Chairman Mahmoud Abbas, is trying to place lots of pressure on the international community - so that Israel will transfer money to the PA and at the same time he is working energetically to establish a government with Hamas -- which does not recognize the requirements of the international community to stop terror and respect the agreements signed between Israel and the Palestinians, and continues to call for Israel's destruction. Israel will not transfer funds to those interested in its destruction, and if Abu-Mazan wants to be a partner of Hamas, it is clear that he is not a partner for peace." 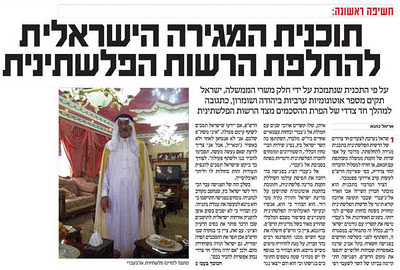 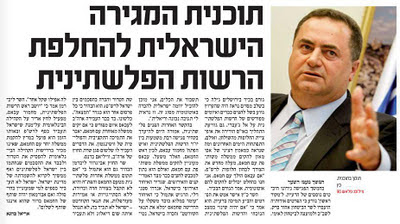 Yossi Beilin and Shimon Peres must despise this idea, since they always say there is no alternative to Oslo.

Now that an alternative is presented we see the emperor has no clothes.

This is one step closer to my suggestion of a 12 state plan, which I think would do Israel a whole lot of good.

Is there any verification of this story from other sources? It reminds me a lot of the "Iraqi leadership" that was ready to take over when they removed Sadam... but that leadership was not wanted by the people and never made any headway.

This is extremely interesting. Unfortunately, I would expect that if Israel actually implements the plan, then Fatah and Hamas will deal with it in their usual manner -- with the quiet support of the US, the EU, and the UN.

It's not without cause that Al Jabri went out of his way to insist that "I am not your collaborator. I am not Antoine Lahad or Bashir Gemayel". He's saying that because he's praying that he won't end up like them. But most likely, his fate will, in the worst case, be just like that of Gemayel (six feet under); or in the best case, like Lahad (in exile running a hummus joint in Tel Aviv).

Abbas and Masha'al worked out their differences in a meeting in Cairo today and will be instituting a unity government.

BTW, Lahad is only operating a Lebanese restaurant in Tel Aviv today because Israel's government stupidly refused to keep the money and arms coming in to him in South Lebanon. If they had, you'd likely see a Druse/Maronite enclave as an Israeli ally there on the border instead of Hezbollah.

Rob, this is the third time that Hamas and Fatah have made this announcement :)

We shall see what happens after people in Israel start doing teshuvah.