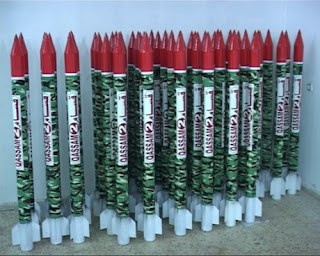 Every Israeli knows what a Qassam rocket is -- the primitive rockets that our neighbors in Gaza have been lobbing at us for years.

What started as a tube with fins, loaded with solidified fertilizer as fuel, the "rocket" has improved over time and now causes mayhem in Southern Israel.

While Israel's best defense from a Qassam would be deterrence and the fear of serious Israeli reprisals, Israel has been instead working on defensive solutions such as the Iron Dome anti-rocket defense system and defensive materials.

This led to the revelation of one of Israel's military secrets, as reported by "Israel Defense"

At the "HomeFront as the Civilian Frontline" conference this past week in Tel-Aviv, Israel Military Industries (IMI) CEO Avi Felder exposed one of the most carefully guarded "Top Secrets" in the military industry...Felder said that IMI develops the most powerful Qassam rockets in the world today.

Felder said that the IMI Qassams are produced to test and evaluate the damage caused by rockets when fired at rocket-proof shielding products from the IMI. The defensive rocket shielding materials are used in protecting Israel's Southern communities.

Felder said that over the past few days of Qassam rockets being shot from Gaza at the Israeli home front, the IMI-owned subsidiary, "Ashot Ashkelon" which is developing active and defensive systems against Qassam attacks -- is located in Ashkelon, a city sufferring from the threat of missiles. "Ashot Ashkelon" now uses the fortification developed by IMI so that they can withstand Qassam and Grad rocket attacks.

He said that IMI protective shelters are located right next to the production lines, proving a safe solution for employees who do not have time to run to bomb shelters when the air raid/color red rocket warning system sounds.

You know, because you wrote about this, I figured it was a catch-22.

Where do they get "solidified fertilizer" from?

Potassium Nitrate & sugar. You heat the sugar slowly until it melts, then cool it. You have to be careful with the temperature so it doesn't ignite.