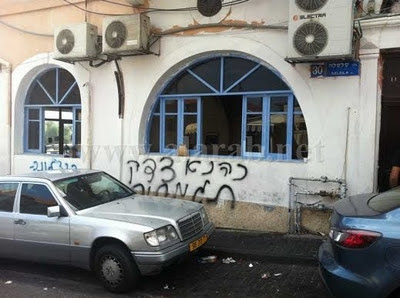 Residents of Jaffa reported on Monday morning that vandals set fire to an Arab-owned restaurant on Yefet Street in the city.

According to a Tel Aviv-Jaffa city council member, the phrases "price tag" and "Kahane was right" were scrawled on walls at the location.

Police were called to the Abu el-Abed restaurant on Yefet Street and opened an investigation into the incident.

This week, 20 olive trees belonging to an Arab family in East Jerusalem were cut down. A sign was found at the scene that read in large letters "price tag".

Earlier this month, two cemeteries in Jaffa were desecrated. Headstones were smashed and racist slogans were spray-painted on graves. The two cemeteries, one Muslim and the other Christian, were vandalized with graffiti that said “Death to the Arabs”, and “price tag”.

"Abu Alabaz - 1949 - Palestinian-Lebanese Kitchen and Catering"
(You can be sure this is a recent sign;
Palestinians never referred to themselves as "Palestinians" in 1949) 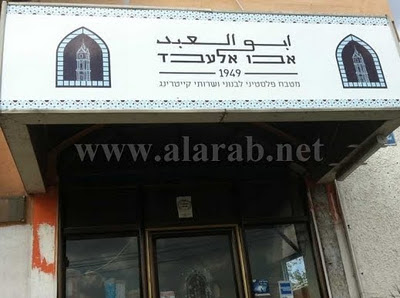 What Haaretz failed to report, was that in the previous cemetery desecration in Jaffa this month, the police were pretty sure that Football hooligan fans were responsible -- "Police said the incident was "linked to a soccer group," and that they were not convinced it was carried out by right-wing elements. (JPost)"

They also conveniently forgot to mention that no charges have been filed against any settler or right-wing Israeli for the mosque arson attacks, and that the vast majority of alleged "price tag" attacks have not been linked at all to Jewish extremists. (For the record, the Muqata condemns this sort of activity)

Yet that's not all. The Al-Arab website had pictures of the atrocities...and plenty of invective against the alleged price-taggers.

Problem is, that their expert photography revealed a spray-painted scrawl that was out of place with a price tag, nationalist graffiti attack -- the name of the football team; "Barcelona" (you can also see this in the first picture above on the left-hand side) 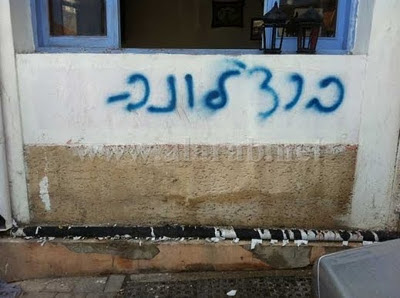 99.9% of the settler movement is disgusted by vandalism...routinely suspecting them for alleged "price-tagging" is just as odious.

And its getting boring already.

Subject is also being discussed here if you're interested.

Either I fully don't understand both sides or I do? In either case I would have to say I believe I side with the vigilantes. Yes, there are more Arabs than Jews but haven't we passed the point of enough is enough? How much innocent blood has to be shed?