As I wrote earlier, we took the kids on Thursday of Chol HaMoed to the Dor beach, located on Israel's coast midway between Hadera and Haifa.

For the uninitiated, there's a biblical commandment for one of the threads of tzitzit to be blue, "techelet." A few years back, a group of Israeli (mostly olim from the US) became determined to discover the biblical blue. The gemara talks about the different ways to identify the techelet - it must come from a snail, must be like the sea, must be very steadfast, and identical to the fake plant-based techelet. The Murex Trunculus answers all these conditions, and was found in mass quantities along the Dor beach. The only problem was that the dye produced from the Murex was royal purple -- "Argaman", and the researchers couldn't figure out how it could turn blue. One day, a researcher in the 80's from Hebrew University put his beaker full of Murex dye in the sun while waiting for his coffee to heat up. When he came back 10 minutes later, he removed the fibers which were in the beaker, and when exposed to air, the fibers turned a brilliant blue, and the secret of techelet was re-discovered. For the murex dye to turn into techelet instead of purple, it needs to be exposed to sunlight, which breaks away the bromide from the indigo. You can read all this fascinating information on the Techelet website.

One may think that once techelet was rediscovered, that its just a simple matter to tie it onto your tzitzit. I thought so...Till I found out that there are many different ways to tie your techelet. First, there's the machloket between the Rambam and the Ra'avad - is the techelet string one completely blue string [Ra'avad] (and therefore, you get 2 out 8 strings after you finish knotting them), or is the techelet string blue only halfway, so that you get 1 blue out of 8 strings [Rambam]. Once you decide which techelet string you use, you need to decide how to tie it: There are many different ways; Rav Amram Goan, the Vilna Gaon, Rashi, Tosafot: 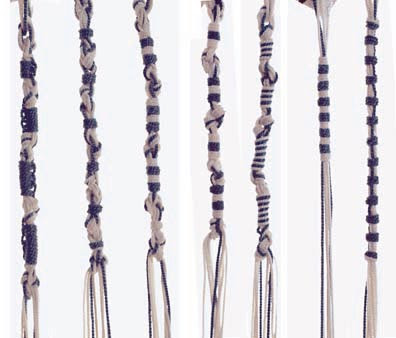 Anyway - we went snorkeling with the kids, made real techelet dye, dyed wool and it turned brilliant techelet blue. Everyone had a blast. Our guide, Moiz Navon was great...the movie and presentations were fun. If you are in Israel during Sukkot, I highly recommend this trip!

What better Jewish family sukkot experience could you ask for?

That's a fantastic trip. Yeah, it's funny because I have just recently become very interested in techelet myself.

Most Jews here still haven't caught on (in the states) but I think it's just a matter of time before they will.

Mostly it's because Chabad hasn't subscribed to it, and they have a lot of influence outside of Israel in the Jewish community. If they were to give their stamp of approval, then you would see alot more people with a techelet string in their tzitzis.

We did that trip last sukkot and also had a wonderful time. Glad to hear you had fun.

Treppenwitz: It was a blast....mostly people from Efrat and my community. Are going to the Kitot Koneneut shoot-out on Isru Chag? Our Chatmar wasn't even invited...

One day, a researcher in the 80's from Hebrew University put his beaker full of Murex dye in the sun while waiting for his coffee to heat up. When he came back 10 minutes later