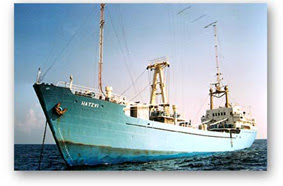 Two years ago Israeli police forces raided "Radio Arutz-Sheva's studios in Beit-El, Israel, and permanently closed the station. One of Israel's most popular radio station, Arutz-Sheva was the only alternative radio to broadcast rightwing views, news and content. The only station to exclusively broadcast songs in Hebrew, the only station with its own news program, the only station that alternative viewpoints could be shared and heard. I fondly remember broadcasting from Beit El with my own weekly news roundup program, being a part of a unique Jewish project -- freedom of the airwaves spreading a different message of hope instead of capitulation.

A bit of technical background; in the State of Israel, all radio and TV is highly regulated and there is no freedom of the airwaves. You cannot open your own radio station and legally license it, for the government wants to be able to control what you broadcast. To get around these draconian edicts, Arutz-Sheva would line-broadcast from their studios in Beit El to their boat, Eretz Hatzvi -- located outside Israel's territorial waters off the coast of Tel-Aviv, and rebroadcast to all of Israel from the ship's on-board transmitters.

In the 1970's Abie Nathan founded and operated the left-wing Voice of Peace radio station, which also broadcast from a ship off of Israel's coast. Yet even though the Voice of Peace ship was 200 meters off the coast of Israel, and didn't even try to legally place itself outside of Israel's territorial waters, the Israeli government never had a problem with it.

Only when threatened with the possibility of a right-wing opinion, did Israel's government go into action -- not only shutting down the station, but arresting and charging the owners, operators, and DJ's of the station.

One could argue that Israel desperately needs a constitution to guarantee civil liberties of freedom of speech and the press. However, as long as the Supreme Court elects itself and is a self-perpetuating body of its own liberal leftist interpretation of what it believes Israel should be, a constitution would be a worthless document.

And so, another year has passed since Arutz Sheva has been silenced. Just don't let anyone fool you into thinking that Israel is a real democracy.

I haven't listened to A7 in a couple of weeks (english internet broadcast of course), but I seem to remember them saying something about getting properly licensed in the near future and being able to broadcast on the airwaves. Is there any chance of that actually occuring or were they just hoping it would happen in the near future.

I think they were hoping...from an interview today, Chagai Segal seemed far from hopeful.

it is unbelievable.The knesset said o.k. but Barak and his Supreme Court nllified Arutz 7.

it is unbelievable.The knesset said o.k. but Barak and his Supreme Court nllified Arutz 7.

Since when do Barak and the Court have to answer to anyone?

A minor criminal breaks the law.

A moderate criminal circumvents the law.

A major criminal applies the law.

Shabbat Shalom from the Muqata.

Jameel, does that mean that we should aspire to become major criminals, so this way we can have enough power to change the system... :)

HAHA, yes, it seems as though being a criminal is the only thing that makes one qualified to hold office in Israel. Not a bad idea...

*jaw hits floor* You used to work for A7?

Good to know. For the sake of blogosphere diplomatic relations, I'll not be telling you where I work!

Purple Parrot! I didn't say I worked for them! I used to volunteer for a show.

I have a real job in real life. (behind my super secret blogging identity)