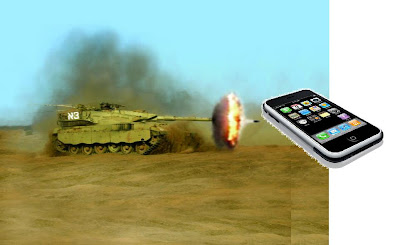 NRG/Maariv reports: [translated from the Hebrew] After the Second Lebanon war, the Israeli Navy's commander, General Eli Marom forbade Naval soldiers from bringing cellphones with built-in cameras onto bases and ships -- since photos of the bombed INS Hanit appeared on the internet.

Going one step further, the Israeli Air Force has now placed a strict ban on Apple's iPhone -- no soldier can bring an iPhone onto any IAF Airbase whatsoever.

"We saved up money for a long time [for the iPhone]as it costs several thousand Shekels -- and now we need to sell them at a loss. Every phone today already has internet connectivity and a built in phone. Our officers suffer from paranoia that the whole world is listening to them. This is just an attempt to annoy us...the IDF is in "trauma".

The IDF goes to great lengths to protect field security and data integrity. In order to prevent information leaks, iPhone and similar phones are prohibited from IAF airbases unless permission is granted by the FieldSec Officer to only allow access of the phone to non sensitive areas.

Did you see the palestinian flag in the Independence day posters from Iriyat Yerushalayim?

to be fair the post picked up on it too
http://www.jpost.com/servlet/Satellite?cid=1239710793206&pagename=JPost%2FJPArticle%2FShowFull

OK - you have received a hat-tip and link within a new post :-)

Where can I find one of those airmen selling the IPhone at a loss?

Maybe the IAF should look into the new supersecure Presidential Blackberry.

SoccerDad: The IAF wont buy cellphones for their soldiers...these are private phones.

But I'll mention the Blackberry to the IAF :)