Really. After Hamas successfully smuggled anti-aircraft Stinger missiles into Gaza, they were given the order by Hamas commanders to shoot down IAF Apache helicopters during the past IDF "Cast Lead" offensive.

Yet when they targeted the helicopters, said "Alla hu Akbar" and pulled the trigger, the Stinger just beeped and flashed an error message... 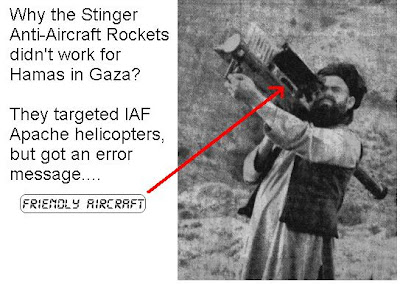 The US manufactured Stinger anti-aircraft rockets have built in sensors that prevent firing upon friendly aircraft...Apache helicopters included.

"We were disappointed by them, and they were found to have been useless," a Hamas source said.

Industry sources said Raytheon, producer of Stinger, installed identification friend/foe capabilities more than a decade ago. The sources said this would prevent Stinger from being fired against any aircraft used by the U.S. military.

Another Hamas source said gunners deployed Stinger along with heavy machine guns in attacks on Israeli helicopters during the war in the Gaza Strip. The source said one Stinger surface-to-air missile was launched, but the projectile veered off course and struck a Hamas gunner squad.

"The Stinger was drawn by the heat of our guns rather than the engines of the Israeli helicopters," the source said. "At that point, we stopped using this weapon."

The sources said Hamas has abandoned plans to acquire additional Stingers. Instead, the Islamic army has been ordering the Russian-origin SA-16, or Igla-1, surface-to-air missile system, with a range of five kilometers. (source)

Since the ultra high tech weapons failed to work for Hamas, they have resulted to tried and true weapons which never fail...the pre-Passover blood libel.

"Jews drink the blood of Muslims and believe that God wants Jews to hate Muslims, according to a Hamas TV skit. Performed before a live audience at the Islamic University in Gaza, the segment features actors playing a father and son, in traditional Hasidic Jewish garb, discussing their God mandated hatred of Muslims. The skit opens as the father instructs: "We Jews hate the Muslims, we want to kill the Muslims, we Jews want to drink the blood of Muslims." It is later explained that Jews wash their hands before prayer, not with water, but with Muslims' blood: "We have to wash our hands with the blood of Muslims." Blood libels were a tragic part of Jewish history, as Jews were accused of using the blood of non-Jews for ritual purposes, especially the baking of Matzah for Passover. Blood libels created deep hatred and were an effective trigger for numerous pogroms and the murder of thousands. The Hamas accusation that Jews drink Muslim blood comes the week before Passover, the anniversary of many horrific blood libels."

Sourced from the Jewish Issues Watchdog.
Wherever I am, my blog turns towards Eretz Yisrael טובה הארץ מאד מאד
Posted by Jameel @ The Muqata

that is too funny!

of course, next time they will know better and will hack the system....

I read this first though my feedburner subscription email to Muqata, which leaves out the pictures.

I thought the error message would more fittingly be "eat sh#t, arab ba$#@^d!"

Oh, this is too, too good!
"...one Stinger surface-to-air missle was launched, but the projectile veered off course and struck a Hamas gunner squad."

This ranks up there with "Zionist time"! (Terrorists getting blown to smithereens by their own car-bombs in Sept. '99 b/c of their confusion over the switch to Sha'on Choref.)

I've always wondered why otherwise smart people fall for that nonsense that they hate Israel but don't hate Jews? There is overwhelming evidence that they hate Jews (first of which is that everyone hated Jews at one point or another in history).

I laugh. Heartily! Scary thing is those stone-age barbarians believe such tripe. One would have thought the information about truth would somehow get smuggled in to those fools.

BWAHAHAHA!! Good one! Goat-squeezers take it in the ass! Happy Passover!

What happens if we have to fight someone with our equipment someday? Iran has F-14s, Pakistan has F-16s.

Conor: You can be sure that just as the weapons designers were clever enough to prevent shooting friendly aircraft, they are doubly as clever to ensure there are over-ride codes which allow it.

Scary thing is those stone-age barbarians believe such tripe. One would have thought the information about truth would somehow get smuggled in to those fools.

Wrong. The weapons don't work right becaus the BCU's (battery cooling units) are old, or not maintained, or jury rigged.

The IFF does not even prevent the weapon from being fired (it only beeps and shakes to let you know it is locked on to a friendly target).

All that information is right out of the US Field Manual. It ain't even classified.