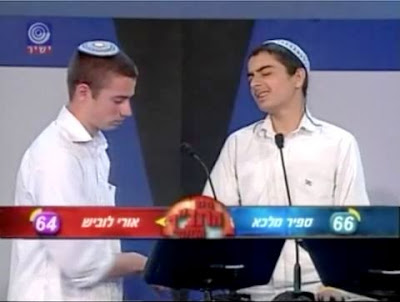 Yesterday, Israel Independence Day, Yom Haatzmaut, marked Israel's 61rst birthday. In addition to a day of fire works (the evening before), special prayers, introspection, appreciation, and mandatory barbecue, we also watched the televised International Bible Competition from 11 AM to 1 PM.

Yes, it doesn't sound amazing or overly fascinating, but from year to year I find the competition magnetizing. The participants have an extraordinary grasp of Bible/Tanach and it never ceases to amaze me how much information the participants store and retrieve on a moment's notice.

The final round of the competition was between two extremely talented young men, Sapir Malka, from the settlement community of Kochav Yaakov, student from "Yashlatz" -- the Yeshiva l'Tzi'irim -- Merkaz Harav High School" (where a terrible terror attack took place a year and a few months ago) and Uri Lubish, from the settlement community of Yatir, student at the Susiya Yeshiva High School in the Southern Hevron Hills.

They were neck and neck, with Sapir leading by a single point. And then the 12 random question final round started. 5 seconds per question, and the most random of questions from end to end of the Tanach, were posed back and forth between the 2 challengers.

Neither Sapir nor Uri paused for more than the slightest of hesitations between the questions and their answers. 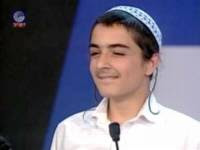 And then, a question was posed to Uri which caused him to hesitate. He paused, and then said he didn't know. He didn't guess, he truthfully didn't recall.

This clinched Sapir as the winner. Yet instead of smiling or grinning in the knowledge that he was now the First place champion of the International Bible Championship, he grimaced in pain.

His visible sadness said it all -- as his friend and competitor Uri missed the question, pushing him down to the runner up-spot, instead of the possibility of them sharing the title together. 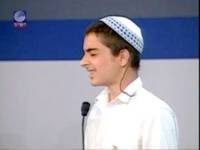 Not only did Sapir win the championship based on amazing knowledge of the Tanach, but he is truly the champion by his exemplary character of seeing the competition as a collaboration.

As Prime Minister Netanyahu said in his closing remarks of the championship, "All of the participants...just by getting here, are winners..."

Avshalom Kor summed up the event, "This is the last year of the International Bible Championship, because B'Ezrat Hashem, with G-d's help, next year, all Jews will be living in Israel, and there will only be a "national" competition."

Do you have a video somewhere?

Hi Jeremy - Here's a video of parts of it. I'll see if I can find the whole thing somewhere.

very nice.
Didn't he say something to Bibi about freeing Pollard when Bibi awarded him the prize?

Rafi: Yes, he gave a letter to Bibi with the signatures of all the contestants asking that he do his utmost to free Pollard.

They did the same thing last year with Olmert. (not freeing Olmert, but freeing Pollard).

I doubt we'll see a request like that for Olmert's release ;-)

kor is hilarious, although i don't think his comment about sapir's פאות was appropriate

also, it think some of the entertainment was cheasy and unnecessary. (although it was interesting to learn that there is a להקה for the רבנות הצבאית)

nothing compared to what happened 2years ago

I don't think there is a need to compare the 2 events. Both instances showed exemplary character.

sapir WAS one point ahead even if they both would have gotten all the questions right.
but your point about the grimace was noted.

What do you make of the medrash which states that the whole world will be elevated to the level of eretz yisroel (and e"y to that of yerushalayim and yerushalayim to that of the bh"m.) Could phsat be that not all of us will literally move?

thanks for posting this story!!!

is he blind? his eyes are closed in the pictures like a blind person?