The US Administration refuses to meet Israel's Foreign Minister...but not with terrorists and dictators. 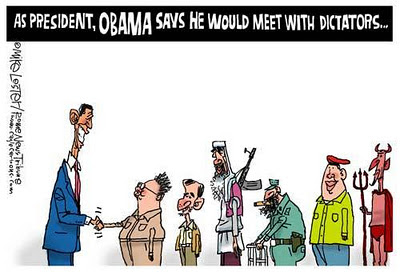 "I said early in this campaign I would meet not just with our friends, but with our enemies. Not just with those we like, but those that we don't...Senator Clinton said, 'oh no, that'd be naive, that'd be irresponsible.' I said, 'remember what John F. Kennedy said, he said 'you should never negotiate out of fear, but you should never fear to negotiate.'" --Barack Obama, Florence, SC, Jan. 25, 2008.

President Obama is more interested for his administration to meet enemies of the USA, but refuses to allow Secretary of State to meet with Israel's Foreign Minister?

Israel's Foreign Minister is expected to make an official visit in Washington in a few weeks, yet to date no meeting or discussion has been scheduled by the American administration.

US Administration officials referred to Lieberman as a "hostile" force, and continue to refuse the offers of the Israeli foreign minister to meet him. Their excuses range from "Hillary Clinton is out of town", to more more explicit explanations.

"Lieberman is an obstacle to peace, we do not want to be photographed with him and what he stands for," said one senior American officials to Israel Channel 2 TV, in tones usually reserved for terrorist organizations.

It should be noted that the strategic dialogue is conducted with Deputy Foreign Minister Danny Ayalon, which required the intervention of Prime Minister because [not meeting with the Foreign Minister] was directly impacting the relationship between Israel and the US.

The Foreign Ministry said in response: "Just last week, Lieberman met with senators and talked on the phone with U.S. Secretary of State on a variety of topics. The schedule for the trip will be finalized close to the FM's departure to the United States and will be publicized to the media." (Israel Channel 2 TV)

The US Administration has a problem meeting with Israel's foreign minister.

Other formal individuals they have no problem meeting with have included:

President Obama meeting African dictator Ali Bongo who has ruthlessly plundered billions of dollars from his own country. (source) 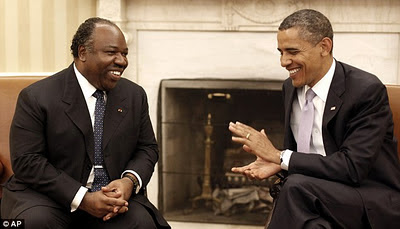 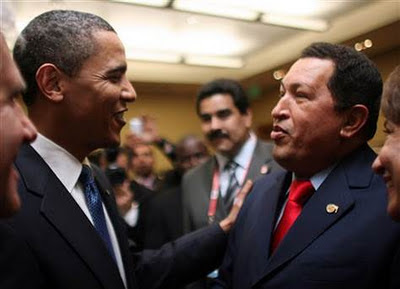 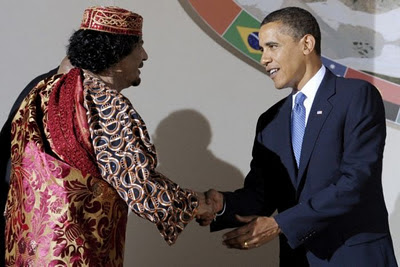 The list is endless. It's just unfortunate that the US Administration is ignoring the huge segment of the Israeli population which elected Lieberman, while having no problem meeting with some of the world's worst vermin.

Should they meet with him in the category of the world's vermin? If you ask me, this is a lot classier - because if they did meet with him, that's probably how they would need to classify it, given their view.

Maybe if they knew he was under investigation, and might soon be on the other side of the law chv"s, they might see it differently :-)

Again, I understand that your blog is your opinion and not a news source, but can you clarify the pictures you showed?
Is he meeting with Chavez as an official get together, or are the 2 crossing paths at an international forum? And what about Qaddafi? Are they meeting officially or are they crossing paths?
If it is the former, then your point has validity. if it is the latter, then you are taking those pictures out of context and demonstrating propaganda at it's worst.
Clarification would be much appreciated.
:)

Anon,
"Lieberman is an obstacle to peace, we do not want to be photographed with him and what he stands for," said one senior American officials to Israel Channel 2 TV, in tones usually reserved for terrorist organizations.

Obama had no problem being cordial and getting photographed with the corrupt. It does not matter which context. Jameel, I'd love more pictures. Please update the names of the dictators to include the countries as well.

Josh,
Are you suggesting that if Lieberman was in a room at a conference, that President O wouldn't shake hands with him, or are you suggesting they didn't want an official meeting with him?
I just want to clarify.
You don't need to work for State to understand the distinction.

In other words, they're perfectly willing to shoot themselves in the foot, knowing full well that several Republican candidates and senior politicians WILL be seen with him.

Why is the Obama administration hellbent on delivering a victory to the Republicans in the presidential election?

Unfortunately presidents have done this many time before, and will for certain continue to do it... regrettably

I hate the dictators as much as the next guy, but they are heads of state, not ambassadors. Granted they are murderous, horrible, anti-Jew (more accurate than anti-Semite) self serving disgusting heads of state...but heads none the less. I just think the comparison would be a little better if you would have posted this when he snubbed Netanyahu.

Since when do you think that Liberman is good for Israel?! Or are you suddenly Joe pretending to be Jameel?

I don't have a problem with this. They're just being utilitarian. They have a specific purpose in not wanting to meet with him, and no reason to want to see him. It's not a morality/popularity contest, or even a metric of how much Liberman is liked/disliked.

For example, I'm sure Obama hates John Boehner, but if John Boehner wants to meet for ice cream on a cold day outside, Obama will go, because it suits his political goals. (How bipartisan!) Meanwhile, if I wanted to meet him in his foyer, I don't think I could pull that off, and I'm on board with Obamacare.

Obama allows himself to be seen with Chavez (but not much more) because his goal was to make America seem friendlier to other countries, not least in Latin America. There's no benefit in having a pissed off Chavez, and no real detriment in having him not pissed off. It's not an endorsement of Chavez, and it's certainly not a statement that he thinks Chavez is a nicer guy than me.

He probably doesn't want to meet with Liberman because Liberman is loathed by both Muslim and European governments. And Bibi as well, probably (who probably does not want Obama meeting with him, either). Meeting with Liberman does absolutely nothing for him. Not one single person in the world would be any more likely to support Obama or his goals if he did, and quite a few more people would be angry with him if he did do so. I'm sure he doesn't like him too, but it's really not personal - just math.

...but can you clarify the pictures you showed?

When I post, as a rule, I try to always include the source and context of a picture or story. That is the reason I wrote "source" next to each photo. The source is not only the location of the photo, but the background / news article where it was taken from, providing 100% of the context.

The first photo of President Obama with African dictator Ali Bongowas taken in the Oval Office at the White House. So that's about as "formal" as possible.

The fact that the US Secretary of State is not meeting Israel's foreign minister is insulting.

Lastly, cordiality to murderers even if they be leaders of countries, in my opinion is wrong. There is no need to shake their hands and smile for the camera.

Since when do you think that Liberman is good for Israel?! Or are you suddenly Joe pretending to be Jameel?

Excuse me? This past has absolutely nothing to do with if Liberman is good for Israel or not. It has to do with the Foreign Minister of Israel being officially snubbed by the US Administration.

Anonymous @ 6:09 PM: Is [Obama] meeting with Chavez as an official get together, or are the 2 crossing paths at an international forum? And what about Qaddafi? Are they meeting officially or are they crossing paths?
If it is the former, then your point has validity. if it is the latter, then you are taking those pictures out of context and demonstrating propaganda at it's worst.

Oh, really? And why, exactly, does the validity of Jameel's point depend on whether Obama was "meeting officially" with these murderous criminals, or just getting himself photographed together with them?

Contrary to what you seem to think (or would like to trick us into believing), the "senior American official" quoted by Channel 2 did not say that Administration officials don't want to have "official meetings" with Israel's Foreign Minister.

What he said was that "we do not want to be photographed with him".

That means that they are refusing to allow even a photo opportunity with Lieberman -- not just an "official meeting", as you disingenuously claim.

Jameel correctly contrasted this policy with Obama's track record of arranging to get himself photographed with the likes of tyrannical despots like Gaddafi and Chavez. The contrast is stark indeed.

Sorry, but you're just going to have to try a little bit harder to come up with a piece of spin control that explains away this particular bit of hypocritical behavior by the Obama Administration.

As for the lame piece of spin control that you tried to lay on us, there are 3 possible explanations for why you could possibly say something so incredibly dumb:

(a) You didn't even bother to read the post.
(b) You have a very serious deficiency in your reading comprehension.
(c) You simply prefer to ignore the facts, and hope that the rest of us are too stupid to notice.

Assuming (c), the only one "demonstrating propaganda at it's worst" is yourself.

Lurker, nice rhetoric. I haven't been called that many names in years. at least not by anyone over the age of ten. Why must any debate you partake in become personal?
That aside, your point is silly. On the surface, one could argue that in a literal sense they were denying Leiberman a photo op, but in point of fact, they were discussing meeting him in an official capacity. As Jameel pointed out, he is making an official visit to Washington.
Of course, as another commentor pointed out, Leiberman is not the Prime Minister, and not agreeing to meet with him is not the same as not agreeing to meet w Netanyahu.
I don't see any pics of the Prez w the foreign minister of Venezuela.
Thank you for your bombast. It allows other readers to approach your comments in the proper frame of reference.

Oh, and you are a serious jerk and not fun at parties.

Anonymous: I don't see any pics of the Prez w the foreign minister of Venezuela.

And are you unable to find any photos of Administration officials with the Foreign Minister of Venezuela? Do you not know how to use Google?

For your edification, here is a photo of Secretary of State Hillary Clinton together with both Venuzuelan President Hugo Chavez and Foreign Minister Nicolas Maduro.

Try again, smart guy. And maybe this time see if you can manage to avoid making ridiculous statements that can be immediately disproven with a 2-second web search. I know you can do it if you try.

Anonymous: Oh, and you are a serious jerk and not fun at parties.

Why thank you for that penetrating, insightful point, and especially -- to quote you -- for "allow[ing] other readers to approach your comments in the proper frame of reference".

And I have no doubt that you, by contrast, are the absolute life of party. (In your own mind, at least.)

Been away a week, so missed comments.
Lurker, the remark "...jerk...parties..." was a joke.
Get it?
Good bye.
Much to someone's relief, this is my last comment on this blog, ever.
Thank G-d! Another leftie disposed of! (not a joke)