Why Noam Shalit will make an excellent MK 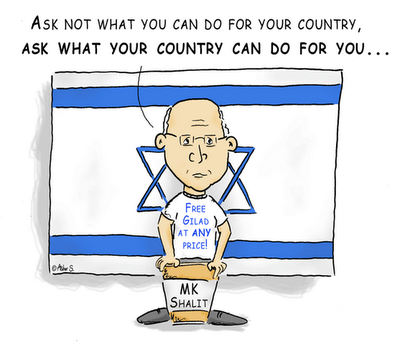 (courtesy JewishPress)
Joining the political rat-race in Israel, Noam Shalit -- famous for being the "Father of Captured IDF Soldier Gilad Shalit (tm)" has decided he has what to offer Israel in terms of leadership and vision. For the record (which you won't easily find), Noam's wife was an active member of the anti-IDF "Machsom Watch" organization.

So why would Noam Shalit, make an excellent MK? Because MKs in Israel are notorious for not accepting responsibility for their actions. Oslo Accord leading to the deaths of thousands of Israelis -- make you eligible to become Israel's President. Yank the IDF out of Lebanon resulting in the second Lebanon war -- you become Defense Minister. Evict 8000 Jews from their homes, leading to thousands of rockets on Israel's Negev heartland (and terrible conditions for the Jewish refugees) and you end up leading the biggest party in Israel.

Noam Shalit may be a dedicated father who stopped at nothing to get his son released -- regardless of who may be killed as a result, and ignoring the terrible injustice of releasing terrorists from imprisonment. Yet that has nothing to do with leadership or proving one is worthy of making difficult choices needed to lead Israel. He had no difficult choices to make -- his only choice was to support releasing Gilad at all costs.

Shalit also managed to elicit the anger of those orphaned by the terrorists freed for his son -- "A Letter to Noam Shalit" from Meir Schijveschuurder.

Yeah, I also find the whole exchange of dangerous terrorists for innocent soliders to be kind of unseemly. I can sympathize with Noam Shalit, and it's certainly hard for me to judge him, but I simply don't understand how he can have the gall to run for office. To me, he's like the devoted family man who gets blackmailed into putting other people at risk to save his family. Sympathetic, sure, but not someone to be put on a pedestal, and surely not someone you want in a leadership position where it's expected (although maybe not in Israel) that you put the interests of the nation ahead of your own.

One day soon, some of the bloodthirsty monsters who were set loose at his insistence are going to be found slaughtering more innocent Israelis. Until now, I've been expecting that on that day, Noam Shalit will bury himself in his home, and avoid public attention, so as to hide from his shame, embarrassment, and guilt. But if he's an MK, then there will be a media spotlight shining in his face, and he will have no choice but to face the public, and look his victims in the eyes.

You forgot to mention duplicity. Didn't Shalit publicly object to high-price prisoner exchanges...AFTER his sone was traded for?

Let me tell you about Patty Wetterling. She tried twice to run for Michelle Bachmann's seat in the state senate of Minnesota. Bachmann won both times. The problem was that her entire platform consisted of "my son was abducted by horrible people." If this is Noam Shalit's platform, I think there's little to worry about. As for other such abductions, I think the policy should be "raid, not trade."

" but I simply don't understand how he can have the gall to run for office. "

It's really not that complicated. A man needs to make a living... Obviously, he isn't Charedi.

Hillel says, "If I am not for myself, who will be for me? But if I am only for myself,I can be an MK" -Ethics of the Fathers, 1:14
-I may have slightly misquoted that. LFD

More likely 15 or thereabouts. And when Lapid gets his party up and running, Labor ain't gonna make it to 15. And thus no MK Shalit.

I love that JewishPress.com cartoon.

What is this about?

Wow.
I can only hope that nothing bad happens to any of your children, because obviously you would advocate only for the public good and not for your child.
Thank G-d you are all so public minded.
Of course I might think twice about being your child...

My criticism was clearly against Shalit wanting to run for office.

As a father, he can do whatever he wants to try to ensure his kids' safety. As a Knesset member he needs to think of the common good of the country; something he hasn't demonstrated at all

Anonymous - I would certainly advocate for my child if it didn't involve killing other people's children.

Jameel,
"..regardless of who may be killed as a result" is not your stating you are only objecting to his running for political office. You are objecting to what he did. Period.
I understand that your blog is your opinion and that no one should approach it as a news source, but at least call a spade a spade.
Anonymous,
"I would surely advocate for my child if it didn't involve killing other people's children."
I don't know if you have children or not, but I have 4, and I would advocate for my child under almost any circumstances short of actually killing someone directly. Again, as I previously stated, if you do have children , then they have my sympathies.

Anonymous: Actually, I do object to what he did -- and I don't think his son should have been released in exchange for over a thousand terrorists. I have written that before on this blog.

My criticism of him here is far more severe -- Shalit has done nothing to prove himself worthy of public office, since his motives before were entirely selfish. And even if you agree with him position that he was doing it as a father (regardless of the price others will pay), the action is still, entirely selfish.