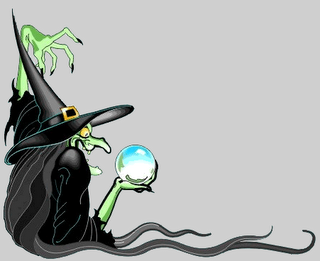 One has to wonder why newspapers even give credence to stories like this. Is the Maariv newspaper (and its website, NRG) so lame that it stoops to printing stories about a witch who "predicted" the CVA (stroke) of Ariel Sharon?

The first paragraph is translated as follows:

On January 4rth, hours before Prime Minister Ariel Sharon collapsed [from a stroke], the cellphone belonging to his strategic advisor Reuven Adler, rang. On the line was the "mystic" Batya Shneerson (age 75) an old friend of the Sharon family, specifically that of the late Lili Sharon. "Arik won't [continue] to be Prime Minister. He will get sick. I see doctors around him", she warned. [insert spooky music]

(you can read the rest of it in the Hebrew article)

Therefore, which of the following answers should we deduce from this story?

a. Maariv is trying to compare the downfall of Sharon to that of King Shaul meeting with the witch of Ein Dor (before Shaul's fateful battle)

b. Maariv believes that something drastic should have been done to prevent Sharon's stroke in light of the witch's phone call.

c. Maariv believes that people are stupid enough to believe this story has any relevance to Sharon's health.

e. This post is yet another sinister way to accomplish what the anonymous commenter said about my Typo BaOmer posting,

"Before you argue on customs practiced by thousands of people for generations who were more knowledgable than you and more pious than you...and before you corrupt the innocent tmimusdik masses, make sure you verify your facts and yes... your poisonous ulterior motived agenda... "

1) Shneerson? Any connection to the Lubavitcher rebbes?

2) I'm suprised no one has tried to link Sharon's stroke to the "pulse of fire" curse that was allegedly put on him before the Gaza pull-out.