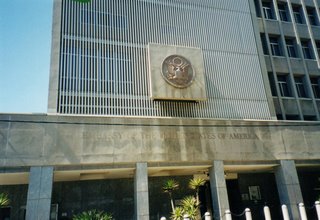 There comes a time in the life of almost every oleh from the US, when you have to visit the US embassy in Tel-Aviv. Despite a US congressional resolution, the embassy is still in Tel-Aviv and not in Israel's capital, Jerusalem.
The US State Department doesn't want to offend the Arab countries by admitting Jerusalem is Israel's capital, and they routinely drag their feet on moving the embassy to Jerusalem.

Perhaps even more annoying is that any person applying for a US passport who was born in Jerusalem will not have "Israel" listed under city/country of birth on their US passport.

Just "Jerusalem"...
no Israel, no nothing
...as if everyone knows in what country Jerusalem is... 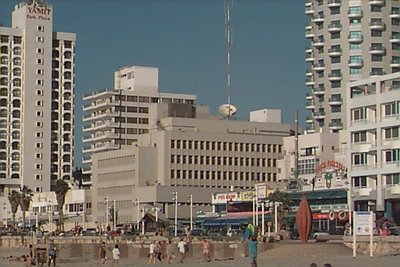 Since the "Muqata" blog gets daily hits from the US State Department, (what are they thinking??) I thought it would be useful for all to hear about my trip to the US embassy to renew passports for the kids and get a "Consular Report of Birth of US Citizen Born Abroad" for our youngest. 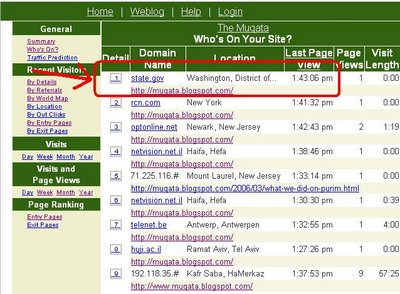 Of course, we could (and should) go to the US Consulate in "Eastern" Jerusalem, but its not a fun place to drag a gaggle of kids, and they aren't that nice there either. Officially, any resident of the West Bank needs to go to the Consulate in Jerusalem for citizen services, but we manage to go to Tel Aviv instead -- its closer, nicer, and despite the craziness, the embassy workers are (for the most part) nicer people.

Plus - at the Jerusalem consulate, any document than needs to be photocopied costs $1 per copy and we would have had to pay at least $25 for the amount of copies we needed on Friday (at the embassy, its free.) Consular Reports, Marriage Certificate, previous passports, you name it -- it had to be photocopied.

We knew it was going to be a crazy day when we walked down the narrow corridor to the US Citizen Services room and a woman was coming towards us in the opposite direction. We didn't know her, but she took one look at the Muqata family and gave us the dire message: "You have never seen it as crazy as it is today..." A few steps more and we saw it. The room was jammed pack. Every seat was taken, the number counter was at 121 and we quickly grabbed a number...lucky us, 198.

So the Mrs. takes one look at the crowd and wonders if it's really worth it to renew passports...

The room is filled with a mix of American Israelis...some tourists...and the numbers progress at a snail's pace. I start filling in the paperwork for the passport renewals. More paperwork, more forms, check the social security numbers...

Announcement: "Ladies and Gentleman: There is a US federal law called the "Privacy Act" which requires that the people at the customer service windows be entitled to their privacy. We will shut down all customer service transactions till the area near the windows is clear."

A minute goes by...."We will not continue to serve ANYONE till the area is clear"

Don't they know they are dealing with Jews...and Israelis?

Two minutes go by and the windows resume service.

Even Israel's Misrad Hapnim is better than this...it used to be worse, but has now far surpassed America in terms of professional and quick service.

And then...I make a critical decision...I decide to go to window #5 to ask a question.

Everyone is entitled to go to window #5, uncalled, to ask a question -- and I decided to ask them an unrelated question to the paperwork I was filling out, yet connected to my own unique super secret passport situation (which cannot be elaborated here).

Announcement: If you need to ask a question, you can go to window #5. If you are here for social security or federal benefits, its too late. Their window closed at 11 AM. Have a nice day!

The assistant consul was perplexed by my question and needed to think about it for a few minutes...after all...when a guy named Jameel asks a question, you can't simply brush him off.

And then I saw it!

Crumpled up on the side of the window...hidden from view from all but the most curious of people, was a small slip of paper. Carefully picking it up I realized what it was...

More dear than a ticket to a front row seat at a Bruce Springsteen concert.

Being the good settler-citizen than I try to be, I announced to everyone around me, "Did anyone lose their number, does everyone have their number?"

Apparently, someone took a number before they realized that window #5 doesn't NEED a number - you can just show up -- and left it there...

We could have sold it on ebay for a fortune. As we were gave our "old" number to the people next us, number 164 was called! Our lucky day! Rushing forward with the number, we presented our paperwork...and spent the next thirty minutes dealing with a very polite embassy worker.

The people at the window to the right of me had a big problem; they didn't have all the necessary documentation. They were very annoyed and started yelling and cursing the poor embassy worker. I was embarrassed that my kids even witnessed such a poor display of manners.

I seriously urge anyone going to the US embassy to read every single single bit of information on the US Embassy in Tel-Aviv website. (Heck, maybe if I give them a link, they'll give me one as well?)

In any event - we thanked the vice consul, told them what a great job they were doing...and after 3 hours and $575 poorer...we were done.

Oh yeah...Israeli passports only cost 75 NIS...heck of a lot cheaper.

Did I ever tell you about the time I brought body guards to the Jm US Consulate?

or the time I walked out so pale and frazzled that the bus driver carried my then baby into the bus, carriage and all?

I must blog it sometime...

I've had my share of dealing with consulates and stuff like that and I have to say beaurocracy is beautocracy no matter where you go. And I totally agree with your assessment that better you take it with you than find out you dont have it. Its great that you had such wonderful hashgacha pratus!

My, oh my! I haven't been to the embassy for a few years, but I've NEVER seen it that busy! That sounds like one busy day!

And it sounds like they've gotten stricter over the years- the last time I got that Report of Birth Abroad, I brought a few of those things you mentioned and I don't think they asked to see any of it.

I'll bet you're glad the whole thing is over and done with!

As you said, the embassy is about 1000% more efficient than the consulate in East Jerusalem. The people that work there (consulate) should really consider another line of work, because they have absolutely no people skills and they can't do office work correctly.

Muse: Thanks! No, you never told me the time about the body gaurds...you must blog about it :)

FrumGirl: Yes, we were VERY lucky...it would have easily taken another hour without the "lucky number".

Shtender: The EJ consulate doesn't really have your best interests at heart...

Are you kidding, I made aliyah just so i could get away from American bureaucracy! Just last month, I sat at the DMV and watched a woman eat a banana for ten minutes between each customer.

Hmmm ok how much does it cost to renew a passport (fainting at even the idea of 600 dollars --thank goodness cats aren't in the same category as kids!)? I've got to get mine renewed (I think) since it is expired and I have to travel to germany in June --or can I do that on my temporary whatever it is the State of Israel will give me before getting my passport in August? Hmmm.

I once shlepped to the Consulate in Tel-Aviv and found it was closed. I looked at my calendar and realized that it was the third Monday in January, and was Martin Luther King's birthday. Have to keep up on those American holidays...

glad it's all sorted now though!

great post!! Very enjoyable reading.
I always go to the embassy in TA rather than the Consulate in east Jerusalem. I have to go soon to register my newest addition. If anything happens interesting, I will compare stories and blog about it (also, I always go early, so I get near the fron of the line).

What I want to know is, what website was that a photo of (the log of where people came from)?

Dutch Girl: And you never heard of the infamous Israeli bank falafel break?

Yael: According to the US embassy website, a passport renewal for an adult (over 16) which replaces an expired passport of less than 5 years, is $67 Take my advice - go early on a weekday (not a Friday!)...but check their website to make sure they're open.

WBM: The Embassy is in Tel-Aviv, Consulate is in Jerusalem...(and avoid the consulate if you can)

Sarah: My kids were very excited -- and the older ones actually enjoyed themselves. They got a big kick out of hearing that the embassay was "soverign US soil" -- they kept chanting, "We went to America..."

It keeps track of how many visitors come to a website, where they come from, and keeps a bunch of stats. It's a worthwhile addition to any blog...contact me if you need some help configuring one for your blog.

I remember my experience 2 years ago when I went to register my daughter and get new passports for my kids. They are very inefficient. I need to go again for the other kids. Do they still line you up outside the embassy and only let in a certain number of people? Do they still take away your cell phone before entering?

well, my only expirience with this kind of stuff is the Consulate in Haifa. It is the best place in the world - there is one secratery and the counsul - who My dad just happends to know. I went there while I was in the army to get a new passport - to go to the states for a couple of weeks - and he helped me fill it out (while schmuzin about the army) - and he even put a rush order on it to get it to me quickly.

the only problem is that I am no longer a North Resident - but I think that if I have to I will change my address go there and deal with him.

I fear the day I will have to start dealing with all this - as it is the WIFE and I have a few things to deal with and we are keeping away from that awful place - now you scared me even more!! HELP!!!

You most likely get hits from the state dep't because there are quite a few frum people who work there and live in Wash. DC or Maryland. I doubt it's because they're checking up on you!

That's my guess, at least.