Routine “thuggery” @ HaAretz (Blame the Settlers at all Costs) 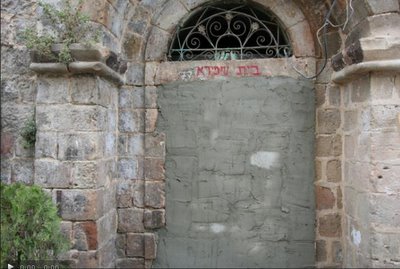 On Sunday morning, the eviction of Hevron's Jews from the Beit Shapira house was broadcast on TV. My 3 year old saw black shirted and helmeted policeman surrounding the building, pointed to the TV and said, "Look Abba, Amona...Amona..."
The HaAretz newspaper’s lead editorial yesterday was about the Jews in Hevron and their “thuggery.” HaAretz states as fact that Jews infiltratated the al-Nazar house in the center of Hebron and provided a “fraudulent rental agreement that said they had rented the house legally from its owner.”

HaAretz’s unbridled passion to defame settlers at all costs led them to slightly misrepresent the facts. And that’s why the Hevron Jewish community is demanding an apology from HaAretz and 1 million NIS in compensation for false reporting and intentional slander.

The Israeli High Court of Justice did not rule on the authenticity of the rental agreement. In fact, they stated that the correct place to determine the documentation authenticity is in civil court. Yet, HaAretz has no problem declaring that the settlers are thugs for (allegdly) infiltrating and illegally occupying an Arab home in Hevron and for providing a fraudulent rental agreement.

Anyone semi familiar with Hevron’s community or the ELAD community knows perfectly well that these communities raise tremendous funds specifically to legally and properly purchase land and buildings. They aren’t stupid -- they know perfectly well that they would be evicted for trying to use a fraudulent rental agreement. And why should they try to use false documentation? They raise funds specifically to purchase these buildings!
Here's an interesting example of one of the previous buildings purchased by the Hevron community:

Last March, just over a year ago, Hebron's Jewish community completed acquisition of a large house in the Tel-Rumeida – Admot Ishai neighborhood. The building, adjacent to a recently completed apartment complex and the neighborhood's caravan homes, was something of a coup. It is extremely difficult to obtain buildings from Arabs anywhere, but especially in Hebron. Arabs selling property to Jews are summarily executed. Of course, first they are tortured. So it was only a few weeks ago when Muhammad Abu al-Hawa, a 48 year old Arab, was found tortured and killed for having sold Jews property on the Mt. of Olives in Jerusalem.
See Timesonline article here.

Upon moving into the building, security forces arrived, demanding 'proof of purchase.' All the necessary documents were turned over to the police, army and 'civil administration' in charge of Yesha. Everything was legal, and we were quite sure that everything would work out.

The director of the civil administration... met with his senior staff and told them, "you have to get them out of that building!"

One of those present, an expert on such affairs, responded, "We can't. I've gone through all the documents. They crossed all the 'tees' and dotted all the 'iis'. It's all legal."

His boss answered, "I don't care, Find a way to get them out."

Over course the Arab owner of the building claimed that the documentation was all forged and that he had never sold the property. These claims, for a good reason. Arabs who sell to Jews are murdered.

It didn't take long to dismantle his story....

...and the land transaction was deemed legal and valid.

In response to the current house in question (Beit Shapira) Hevron’s community issued the following points:

1. The Jewish presence in the building is legal.
All necessary legal documentation is available and held by the claimants. Tremendous amounts of money were invested in the building, and the decision to expel us, based upon empty, false complaints of the previous owners, comprises thievery and improper utilization of authority by powers that be.

2. We accuse the previous Arab owner of false claims.
The fact that the previous owner denies the transaction is a normal and frequent occurrence. This, due to the fact that their lives are endangered. Such a denial is accompanied by a complaint issued with the police. The police investigation should then take place in accordance with this fact, which is well known to them, and they should not reach hasty conclusions.

We are one hundred percent convinced that, given the opportunity to present the facts and documentation in an authorized court of law, the undisputed conclusion will be reached that the property is legally held by the Jewish community of Hebron. We therefore are requesting that the Supreme court prevent the proposed expulsion and transfer the case to the proper court of law.

...it must be stressed that the question at hand is not legal, rather it is strictly political. The decision to expel us from the building was taken by outgoing Defense Minister Shaul Mufaz and Prime Minister Ehud Olmert immediately following our entrance into the building, prior to any examination of the legal documents or claims. The police then began a one-sided investigation before any claims or complaints were filed by the previous owner.

You may disagree with Jews living in the West Bank, or even in Hevron. But for the Israeli government to abuse the law, and force people out of their homes...and for HaAretz to misrepresent the facts just to malign the settlers...is just plain wrong.

Yes, heard this on the news.

Hi, i was looking over your blog and didn't
quite find what I was looking for. I'm looking for
different ways to earn money... I did find this though...
a place where you can make some nice extra cash secret shopping. Just go to the site below
and put in your zip to see what's available in your area.
I made over $900 last month having fun!
make extra money

Hi, i was looking over your blog and didn't
quite find what I was looking for. I'm looking for
different ways to earn money... I did find this though...
a place where you can make some nice extra cash secret shopping. Just go to the site below
and put in your zip to see what's available in your area.
I made over $900 last month having fun!
make extra money

a) hey, get rid of the spam comments.

b) some three years ago, HaAretz lost a big libel case to the Jewish Community of Hevron after they had pubished a story by Amira Hass about Jews dancing on a dead Pal. or something like that.

Jameel, I totally agree with you. I find myself getting more and more upset about what I see happening with the settlers. I see this pot boiling over, ya know what I mean? When I see Peretz talking about taking apart the illegal outposts in the West Bank as one of his first moves as Defense Minister makes me want to pull my hair out. What about simultaneously calling for the dismantling of illegal ARAB homes and settlements?!? I forgot that we're an Apartheid. Jews don't have the same rights as Arabs. Arabs get away with murder, and Jews get jaywalking tickets. Uch! Never mind.
-OC

OC: Its going to get a loss worse. Currently, the Defence Ministry's #1 job will be getting rid of the outposts...yet why did Peretz authorize an additional ten thousand Palestinian job permits into Israel...and why is the #1 job running after hilltop outposts, when there are SEVENTY active terror warnings? Don't they have anything better to do...

Oh yeah, I forgot, they need to raise the price of bread.

You make it sound like Haaretz maligning "settlers" and the Israeli government breaking the law and forcing Jews out of their homes are rare occurances. It has happened before, (although I daven it doesn't happen again.)

Wish I was in Israel: Rare occurance? The title of the post was "routine"

Yep, the Israeli court system is so corrupt, Jewish residents of the Territories liberated in 1967 have, for all effects and purposes, no rights at all.
OLMERT WILL PAY FOR THIS!

You should all take into consideration that the west bank is , according to INTERNATIONAL LAW ( i dont want to use Palestinian or Jewish terms ) , is a OCCUPIED territory. It is , thus, ILLEGAL to buy, sell or confescate any home, land or property in HeBron or anypart of the occupied west-bank.
Note : Rafael's note ( Up ) was exciting !!