I woke up this morning to find a flurry of activity in my backyard.

At first I assumed it was because they finally decided if the fence was going to go to the right or left around my house – or more likely right through it.

None of the workers would talk to me, claiming secrecy, so I turned on the news to quickly learn that the Hebrew University team turning over my vegetable garden was in fact looking for King Herod.

And as turns out Herod’s tomb was found… in my backyard. 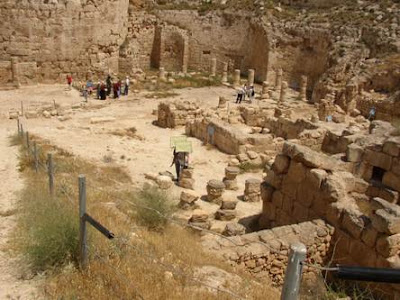 JoeSettler on top of Herodium (in the center - with the gun) 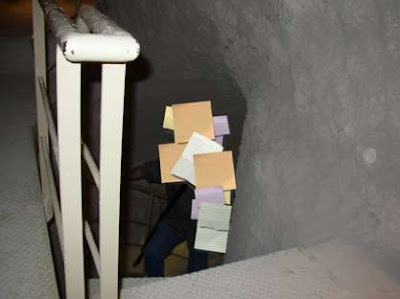 JoeSettler inside the mountain (apparently, and unknowingly, right near the tomb)

This of course presents a difficulty.

You see, Herod, a controversial, often rightfully vilified Jewish king (unless you’re a Palestinian, and then he was apparently a Palestinian king as I actually heard an Arab tour guide explain to his gullible group of tourists on top of Herodium, seen standing behind me to the right in the picture) who built quite a lot of Jewish buildings in Israel is also going to find himself on the wrong side of the fence.

While, the area he is buried in is has been demarcated as a nature reserve (or Area B – it is hard to really see on the map) and the exact route is still under discussion, it is pretty clear that, just like other important Jewish religious and historic landmarks, Herod will find his grave under the proper supervision and protection of the Palestinians (think Joseph’s Tomb). 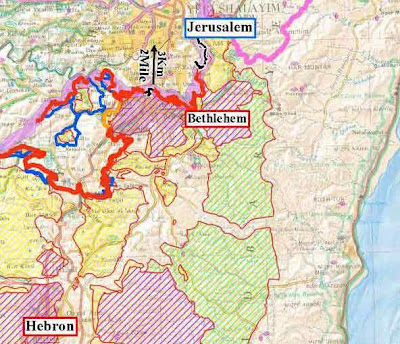 (Links to Maps: Here and Here)

Of course, maybe, like the Jews of Gush Katif, the Israeli government will dig Herod up and march his body through Jerusalem, and like Faisel Husseini, they’ll rebury him on the Temple Mount, right next to the Wailing Wall Herod built to hold the expanded Jewish Temple he built on top of it.

On the other hand, maybe this means my house will end up inside the fence after all (not that the fence should be built at all).

Wherever I am, my blog turns towards Eretz Yisrael
Posted by JoeSettler

Come on - Jameel beat you to it with the smiley faces, but you can't come up with something better than Post-its?

Wait a minute, so you're saying that you killed Herod and buried him in your backyard?

I can see what happened to the parsha sheets Jameel complained about.

dtc: I like post-its. It reminded me of "Brazil" (the movie).

josh m.: No. If you read the latest Ha'aretz update you would know that his tomb was robbed sometime after he was buried.
That was me.

An ancient lyricist once wrote - "Hey, Joe...where you goin' with that gun in your hand..."

I'm with you - no fence required.

Is there some rule that a soldier is not allowed to fraternize with tour guides and their flock? What would have happened had you laughed and told the sheep that their shepherd was just a big fat liar? Yes, I understand it could go both ways, but are you specifically warned about making loose comments to civilians like that?

So you live on Herodium?

If the wall ever does get built, he'll be at home on either side of it. He built both the Kotel, the building atop the Me'arah.

yonah: I'm not a soldier anymore.

That's one of my many CTU weapons (like Jameel).

I just happened to have been visiting (see next answer) there at the same time. He'll continue to lie anyway.

Shmilda: Not ON Herodium. IN Herodium. Great tunnels going all over and through the mountain, probably dug during the Bar Kochva period, but we'll learn more about that soon. Really cool place though.


Great response on the Wall.