Last year, the big talk of the town for Lag Ba'Omer (yes, I'm still counting with a bracha...is RenReb?) was the hypothesis that the holiday is a sham. The scholar who challenged tradition was humiliated, scorned by many, and was forced to retract his hypothesis, apologize, and he's never been heard from again.

Wondering what to write about Lag BaOmer this year, I found myself in a quandary. Its a great holiday to blog about. One of my all time favorite tiyulim took place Lag BaOmer back when I was learning in yeshiva...I could scan in those pictures and post them, show you the route of the tiyul, explain why it was one of the greatest tiyulim of all time...

I could fast-forward to the present time, and explain why my kids go insane over Lag BaOmer every year (more than most Israeli kids), and what an amazing time they have.

In the meantime, I want to share a weekly rant of mine and show it's connection to Lag BaOmer as well.

I don't know what it's like in the USA, but here in Israel, entering shul on Erev Shabbat drives me insane.

It's not because I'm perpetually late to shul on Friday evening (don't forget to Vote for Shifra's "18 minutes before Shabbat" Best Humor Post at the JIB awards over here...or for my Elvis the Drug dealer post). It has nothing to do with needing to explain every single week to my 3 year old that the candy man only gives out candy on shabbat morning in shul and not Friday night.

Rather, it's the sight of the 57 different flavors, colors and variety of Parashat HaShavua sheets on tables in the shul.

I simply, can not stand them.

What started out as a nice idea 22 years ago, has ballooned into an insane custom that results in the cutting down of thousands of trees, a huge waste of paper, and worst of all, I can't get my older kids to concentrate of Friday night davening, because they would rather sit and read these sheets and look at the ads...than daven.

I am not alone.

Besides the Friday Night mayhem in shul, comes the endless bickering...

"Where's the YESHA parasha sheet?"
"Where's Kolech" (the feminist page)?
"You read Kolech? You are SO pathetic."
"Where's the Kach and Kahana Chai pages?"
"I'll swap you a Sephardi one for that full color cruise brochure"
"You read that?!"
"Who let this dreck into shul?"
"I'm going to burn all of these after shabbat"
"Where are the Torah Tidbits -- why are they gone already?"
"Which ones are for kids? Why is there nothing for kids this week?"
"Are there any left with the pull-out Hamsa poster?"
"Is that the normal Chabad one or the crazy messianics one?"

It never ends. Apparently, Lag Ba'Omer at Har Meiron is even worse than Friday nights at my shul, and tons of parasha sheets get distributed, and then dumped everywhere, littering the mountainside.

Which led to the creation of...(and I'm not kidding, this sheet was in shul this past Friday night...) 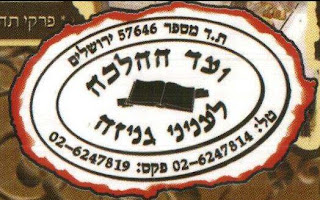 The Va'ad Halacha for Inyanei Geniza!

You know something is serious in Israel, if there's a "Va'ad" for it (an "organization").

My MDA/Hatzala cellular walkie-talkie has a Stamp on it -- certified to have no connection to the outlawed "internet," and formally approved "Kosher" by the Va'ad of Rabbis for Kosher Communications.

Is Hot Chanie walking around Meah Shearim in a too tight skirt? The Va'ad for tzniut (modesty) will chase her out of the neighborhood faster than you can say, "Hot Chanie didn't win a JIB award." (See Shifra's Hot Chanie Field Guide...she needs only 800 more page views to hit 100,000!!)

So whats this new Va'ad about? Geniza.

(Quick Wikipedia definition: A genizah or genizaHebrew: גניזה "storage"; plural: genizot) is the store-room or depository in a synagogue, usually specifically for worn-out Hebrew-language books and papers on religious topics that were stored there before they could receive a proper cemetery burial, it being forbidden to throw away writings containing the name of God (even personal letters and legal contracts could open with an invocation of God). In practice, genizot also contained writings of a secular nature, with or without the customary opening invocation, and also contained writings in other languages that use the Hebrew alphabet (Judeo-Arabic, Judeo-Persian, Ladino, Yiddish).

So because tons and tons of pages with G-d's name on it are being dumped everywhere, this Va'ad has decided to outlaw ALL PARSHA SHEETS this coming Lag BaOmer at Har Meiron! 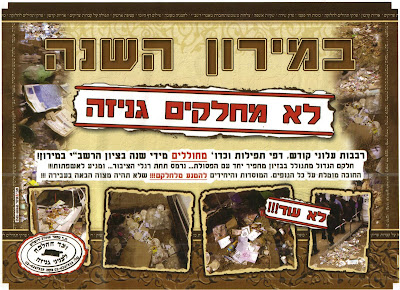 Now if only we could outlaw all parasha sheets in shul, I'd be a much happier camper. (This may sound rather grinchy of me...but I can rant, right?)

A Happy Lag BaOmer to all....though I still need to post a bit later with more endorsements for the JIBs and the best posts.

I thought Torah Tidbits was banned from your Yishuv after the OU invited Olmert to speak.

A couple of random tidbits (not of the Torah Tidbits variety).

1. Ads are probably assur to read on shabbos. CYLOR.

1a. As a result of (1), our Rav doesn't allow the distribution of any sheet containing ads from within the shul. This even includes, in his view, a sheet that says "sponsered by" if, in addition to the name of the business, it includes a phone number or address (kal v'chomer prices...).

2. If you don't read them, they're probably not shaimos. Again, CYLOR, but unread divrei Torah (unless they contain shem hashem) do not count as sheimos.

3. Speaking of Torah Tidbits, am I the only one who misses the really hard Parsha Puzzle Pix?

" if only we could outlaw all parasha sheets in shul"

Some places already ban them.

In the shul right next to me they don't put out the parsha sheets until after davening is over friday night. So I go to the place a little further down. What am I supposed to do while someone speaks for a half hour, or they pick one of those long dram out tunes for Lcha Dodi, or randomly decide that this week will be Carleabch davening??? I cant go to shul if I don't have my parsha sheets....

Remind me to read slowly because this one line tripped me up:

"Are there any left with the pull-out Hamsa poster?"

Why? Because for a second I swore it said pull out Hamas poster. Not that I really thought that Hamas would ever show up at the Muqata.

Some place I was at (a kibbutz? yeshiva? shul?) took all the parsha sheets collected some interesting bits from each, put out their own sheet from that, and then banned the rest.

I remember reading one of Rav Yisrael Rozen's "op-eds" a while back where he bemoaned the number of sheets out there, and questioned if today we should even be concerned about geniza for them - they're meant to be temporary.

Joe- I think Jameel still brings the Torah Tidbits to his shul from Jerusalem.

Jameel- I thought I saw the candy man giving out candies on Friday night and not on Shabbat morning. Or was that guy behind us not the official candy man?