More Only in Israel... 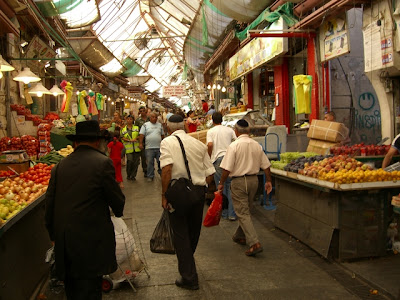 (from the Muqata mailbag...)

Recently I interviewed a new oleh, for a position in my company. A young man born to former Israelis, he arrived in late December and spent the first months in the Holy Land taking his wife & 2 year-old to doctors. I’m not sure if this is a psycho-somatic syndrome but for some reason this happens to many olim, regardless of what time of year they arrive.

One of the questions I asked him, during the small talk part of the interview, was what does he like most about Israel that he didn’t have in ------- his city of residence in North America. (Name of city is being kept classified to protect the few innocent residents of that city).

His answer surprised me.

He told me what he really likes most is the ability to freely go up to total strangers on the street & ask for anything. Directions, help finding a restaurant in the area, advice on what stock to invest in or what he should buy his wife for her birthday.

I guess I’ve been in Israel too long as I kind of take this unique sociological phenomenon for granted, and have forgotten that in -------, one does not even dare make eye contact with strangers on the street, let alone ask them for favors or unsolicited advice.

The very next day I headed toward the train earlier than usual for my daily journey to work in Tel Aviv. Earlier than usual, since a union strike was supposed to start at 6 AM. However, at the last minute, (the time most things happen in our beloved country), the strike was pushed off until 9 AM.

Little did I and the hundreds of people who arrived at the remote train station know, that Israel Railways decided not to even bother taking the trains out of the depot that morning!!

Everyone looked at each other asking what do we do now??

Within seconds, cell phones were whipped out to call army buddies for advice, GPS-enabled palm pilots and Ipacs were working and huddles of confused commuters were simultaneously formed in the train station parking lot looking for and giving free advice.

Finally, an older Yemenite woman sighed & mumbled out loud, I guess I’ll just take the bus like I did for 20 years before the train was built. All eyes widened and looked up from their color screens, detaching their ears from cell phones in the middle of consulting their army buddies who had been navigation scouts in the paratroopers.

Bus? Did she say bus? Never knew there was a bus that ran in this area.

At once, the herd of commuters followed the Yemenite through the parted sea of u-turning cars up and out of the parking lot, to the Promised Bus stop.

When is it coming? Where exactly does it go?

Nobody seemed to know or care. Just get us out of here and get us to work was the battle cry.

Indeed a bus came, and though it was overcrowded it started moving us toward our destination.

I found myself standing in the aisle over a young 20’s something student reading a newspaper looking at the puzzle page, I suddenly see his hand reaching toward my dress shirt pocket. “Ten li at ha’et shelcha,” he said, a millisecond before grabbing it out of my pocket. I of course obliged since we were far from our destination & stuck in traffic. I thought to my self..."What a Chutzpah. I was taught to ask people ’May I please borrow your pen for a moment,” and not make it a fait accompli.

At first I was annoyed, but then I remembered what the young interviewee told me the day before about what he likes most about Israel…

45 minutes later the young man doing the crossword puzzle looked up seeming stumped by a clue. So I asked him what the problem was, he said he’s missing one answer to complete the puzzle. "Who was a Jewish swimmer in the 1972 Olympics, 5 letters, first letter is samaech?"

"Kol hakavod" his face beamed at me, bearing a broad smile – mission accomplished - we finished the puzzle.

I smiled to myself and thought… now that’s what I like about Israel.

Do you have an only in Israel story from life here, or when you spent time in Israel? Send us your stories...we'd love to print them here!

Just thought I'd mention this - the fact that new olim are sick alot is not psychosomatic - it's just that there are many viruses out there that they've never been exposed to before. It's a common phenomenom among new immigrants all over the world.

That is so cute. One of the things I saw the first time I was in Israel stuck with me, because I'd never seen anything like it in the uS.

A woman who needed to enter at the back of the bus because she had a baby and a carraige. As she made her way to the front of the bus to pay the fare, a total stranger held out her hands for the baby, and another for the stroller. The woman handed over both, made her way to the front to pay the fare, and then collected both child and stroller. Completely unbelieveable.

Jameel, that was great. BE"H Do more of this. This is just why my homesickness needs!

Yesterday I went to buy my daughter a pencil sharpener - the kind that holds the shavings. I went into my favorite cheap store. They had two kinds of sharpeners. I was about to take just the more expensive one, when the young man putting merchandise on the shelf said, "Here. Take this one. It's less money but it's better made." I expressed doubt but he continued to insist.
And my makolet guy refused to sell me a can of tomato paste. He'd brought in a fancy passover hechsher and it was more than twice the usual price. I don't know what he's going to do with the expensive stuff, but I don't think he's going to sell too many.
Would such things happen outside Israel? I have no idea, but I'd like to thing it's a unique phenomenon ...

and i never take it for granted

"Here. Take this one. It's less money but it's better made . . . I expressed doubt but he continued to insist."

reminds me of when we were in a chinese restaurant in teveriah (pagoda). we ordered appetizers and were about to add entres. the waiter insisted that the appetizers would be more than enough to fill us up and he refused to take the order for the entres. he said if we were still hungrey later we could always order more then. (we made sure to tip him as if we had ordered the entres.)

Cute story, truth be told I do not imagine a similar scenario here, especially the part with the trains not leaving:)

Thanks for sharing that story, Jameel! I love Israel. :)

so this guy is walking into the supermarket directly in front of me. he's dressed super-casually, an understatement if there ever was one -- wearing a self-made muscle t-shirt exposing hugely muscled arms, baggy cargo shorts, untied workboots, shaved head, gold rimmed aviator sunglasses... looked just a tad intimidating. he stopped suddenly at the door of the supermarket as if searching for something. a smile lit up his face as he found it, raised his right hand and made sure to lovingly kiss the mezuza as he walked through. what a country!

Even after living here all these years, this kind of story still puts a smile on my face! :-)

The guy is so right, but funny enough I think of cigarettes and eating food.

Occassionally when I was younger I would crave a cigarette, but since I wasn't a smoker, I never had cigarettes on me. In Israel, I learned it was no big deal to ask a stranger for a cigarette, but here in the States, its just not something you would do. BUT having adopted the art of Israeli chutzpa, it didn't take long for me to bravely ask my follow American stranger.

As for food, I loved it that whenever I was eating something out in public, whether it be on the street, waiting for the bus, or whatever, strangers would come up to me and say Betaivon. Now that is something I wish more of us could feel free to do here in the States. I think if someone actually did that to another person, it might offend or embarrass the person with the food.