Yet another fatality in Sederot. 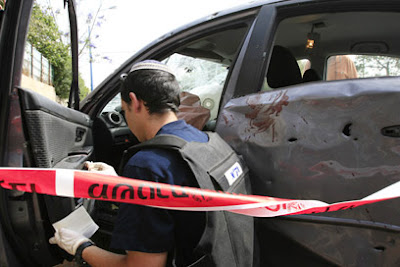 A man was killed Sunday morning in the southern town of Sederot after a rocket landed near the car he was sitting in.

The man, 36-year-old Oshri Oz of Hod Hasharon, crashed into the wall with his car after it was hit. He managed to get out of the vehicle and take a number of steps before collapsing. He was evacuated to the Barzilay Medical Center in Ashkelon, where he died of his wounds.

Oz was a computer technician who used to visit Sderot often as part of his work. He was survived by his pregnant wife and a 2-year-old daughter.

Sederot hasn't been receiving much protection from Israel's government, so they decided to print their own money. 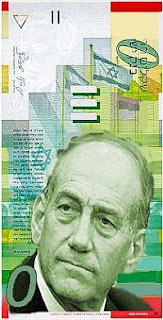 Will anyone accept responsibility for the Disengagement's security fiasco?

No one from Kadima or Labor, that's for sure.

the time has come for my ideas...

i have 2 words Pulsa Denura

It is going to get uglier.

Amishnover:
You have spoken the forbidden words, and are now under arrest.

A pulsa denura - absolutely not.

don't even go there

under arrest?
if i can spend my incarceration in the homeland then die'yanu

With Olmert attempting to do a magic trick and distract everyone's attention from Gaza and Sderot by making "peace" calls to Syria for the "disengagement" from the Golan, jack is totally correct: It's only going to get worse. Until the age of the death goes down, i.e. A CHILD MUST DIE, before Olmert is forced into a corner to step up and do something. But, then again, Olmert is Olmert.
-OC

As much as we are upset at the Government for ignoring Sderot and their security, we must question what the people of Sderot have been doing to alleviate the situation.

The morality of the issue is very clear- they have every right to protect themselves, and to go as far as to tell the government in Jerusaelem that if they are not protected, they will secede from the State of Israel.

I wonder if then we'd finally see troops in Sderot...

Jerry; Israel is a slightly different country than the US. Civil rights and morality mean nothing to the government here, which is why when people demonstrated over a moral issue (ie, they feared that the Oslo accords were going to bring unprecedented terror to Israel) and they took to the streets to demonstrate; the government (via the police) bashed heads, arrested the leaders for sedition, and don't give a damn about morality.

You go against the government, they bash your head. It's very simple.

How about this? You receive a licensed weapon, and use it in self defense. Is that moral? Of course. What will happen? You'll find your weapon confiscated if you use it, and under arrest.

Or howabout if you are an IDF army officer? You are sent to find a car bomb in a Palestinian Village. You come under attack by rocks, molotov cocktails and an angry mob. You shoot in the air, shoot at building walls to ensure the bullets just don't just fly anywhere. Palestinians claim someone was killed by a bullet that went through a building's wall. No body, no proof, no autopsy.

What happens to the officer? Jail.

We have laws, and those laws are passed by representatives of the people.

If you don't like the way the government acts, you can use your right to vote a different government into power. If these issues are very important to the people, then a party will run on a platform to please the voters.

If for whatever reason this is not mentioned as a reason to choose another government, you are welcome to use your democratic right to assembly/protest to bring the issue to the forefront. If enough people care about it, they will choose their representatives accordingly.

Don't just say it works differently here. There are basic rules of the game, and I guarantee that the court (that you dislike so much) will choose democracy 10 times out of 10 over a government that bashes heads...