While we started off with a good running in the JIBs...the Muqata has been overtaken in almost every single category! What is this?! This blog has hundreds of readers...where are they?! Unless...maybe most of you are really Arabs who hate this blog. Could that be? If you haven't voted in the JIBs yet (here are the reasons and links to vote for me) 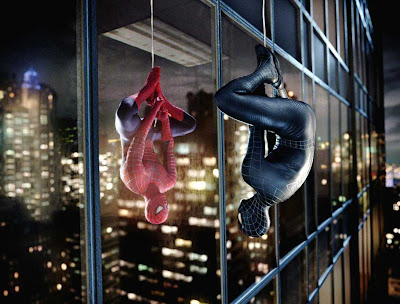 Spiderman seeing his blog persona?
The Mrs. and I rarely go out to movies, and I can even count the number of movies we've seen in the past 5 years in the theater on one hand.

So...last week, we went to see Spiderman 3. With Lag Ba'Omer having come and gone, we went out with some friends to Cinema City, Israel's coolest cinema. Since we rarely go out, we treated ourselves and paid extra money with our friends to get upgraded seats.

Picture the following: Before the movie, you arrive early with your prepaid tickets and reservation to a private VIP lounge. Sitting down with your friends, all the food in the lounge is free (well, you did pay extra!!) -- eat and drink as much as you like.

When it's time for your movie to start, the movie hostess announces that the movie is about to begin, and you exit the VIP room directly into the private balcony of the movie theater.

You can't even see the "coach class" seats below!

With only about 40 seats, the VIP exclusive treatment means you get a large leather seat with electronic controls (and footrest!) that competes with LAY-Z-Boy chairs (or first class seats on British Airways). With mini tables between the seats, there is ample room for the food you bring with you from the "lounge"...ice cream, popcorn and drinks. You get the same wide screen movie experience with stomach churning Dolby Surround-Sound TM, and yet, you get pampered with additional luxuries and extras.

What's a COOL "only in Israel" commercial? Where it asks you Jewish related trivia questions on expressions, and you have to figure out what the Jewish source is. I'll try to have some examples in a later post.

About the movie itself...

Well, movies at the theatre are apparently not meant for my wife and I. As on our first movie date, she fell asleep during the movie -- I assumed because I was just too boring a person. (Luckily for me, she married me anyway) I guess the extra comfortable seats in the VIP section caused her to fall asleep...again. (I didn't take it personally).

I liked the movie, since its exactly how I would expect a comic book to be thrown onto a movie screen -- Dizzying digital ink with computer enhanced graphics.

Now, if there were going to be a Spiderman movie based on the JBlogosphere, or the Jewish world, who would the villains be?

1. CANDYMAN! This guy from the shul, larger than life with a tallit-bag full of weaponized candies to be thrown.

4. The Gabbai. This particularly ferocious character comes after you when you least expect it to give you hagba. Actually, a group of super-heroes who should join the comic book could be the HRT. The Hagba Rescue Team (read about them here). These fearless superheroes allow us to continue to eat week after week. (We had a close call last week as well...)

5. Would the Renegade Rebbetzin be a superhero or villain?

After voting for the Muqata blog in the JIBs, let me know what you think...This could easily turn into an interesting JBlogosphere project, which I'm sure the Holy Hyrax would love to illustrate.

Don't feel too badly about not being in the running on the JIB awards. I figured I would get knocked out pretty quickly since I don't care about them and decided not to campaign. It's not like Ed McMahon will show up on the doorstep of the Muqata with a million-Dinar check.

I saw Spider-Man 3 in Talpiot on Thursday. Not quite the same luxurious experience as you had. How much does that run?

Evan: It's not like Ed McMahon will show up on the doorstep of the Muqata with a million-Dinar check. I wasn't counting on providing my address for him! But if it would help...

Besides, I'm still working out logistics for the Lucky 200,000th visitor to the Muqata...

u do know haw to live!

Cute story. Glad that you and the Mrs. enjoyed your date with friends. I think most super-moms doze in movies; they certainly deserve the rest.

Was it that close of a call last Shabbat? I think there are more close calls in "teen" minyanim than regular ones.

For the record, Jameel's shul is wonderful!

Balabusta in Blue Jeans, still not able to log from her acct., says:

Hot Chanie would be a great villain--sort of Poison Ivy-esque, but with a longer skirt, and better jewelry. I imagine that her sheitel emits some sort of hormones that render the (male) heroes helpless.

RenReb is obviously Spiderman's lab support, like M, or Abby from NCIS. From her anonymous location, she and the Rabbi Who Rocks Her World analyze bedikahs, check fiber transfer evidence for shatnes, and give out gadgets copied from the ones on 24. When Spiderman drops in, she gives him coffee and sandwiches, and when he swings away she whips out a siddur and begins to say tehillim. In the last scenes of the movie, nearly blind from lack of caffeine and muttering "I HATE fast days", she will brain Hobgoblin with a volume of shas. (Great slow shot of her snood swinging around as she lifts the book.)

5. Would the Renegade Rebbetzin be a superhero or villain?

You can call her Aunt May.

Now this is a great idea - Jewish blogs as comic book fodder. Definitely worth some more posts.

(and don't ask me why I can suddenly comment, I have no idea!)

(and don't ask me why I can suddenly comment, I have no idea!)

Sorry, but you got hijacked by those lousy journalists who promote their stuff via Public Radio.

although in australia the shul Candyman is known as the 'Lolly Man' :P

As they said in Chicago during Mayor Dailey's rein - Vote early, Vote often and correctly.

The movie theater sounds wonderful. Unfortunately, i'm probably like your wife and would fall asleep but what a comfy nap it would be.

People: Thanks for the support! I'm trailing by about 30-35 votes per category. How difficult can it possible be to get 30-35 more votes?!

Sarah: We'll have to add some "other" villains to the JBlog comic book... ;-)

Neshama: thanks! every vote is appreciated!

QM: Well - as much as I like Chicago, we can't vote "often" since the JIB votes can track which votes are faked.

Balabusta in Blue Jeans: Can I contract you to help write the first edition of the comic book? :)

Jack: I think RenReb would kill you for saying that!

There are so many good Jblog heroes/villians out there that it is an idea just begging to be expanded.

I would love to watch this, your blog makes me fee that I am missing a lot in life, because of not seeing this.

I love the first class cinema seats idea. We get "premium" seats, but they're more like "premium economy" than first class. Still, if it's "only in Israel" I'll have to check it out next time I visit.