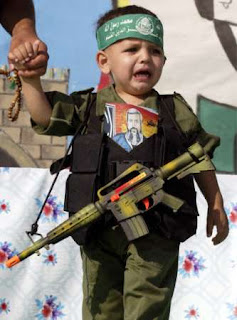 If you're a Palestinian child lucky enough to be living in the Gaza strip, this is probably going to be the best summer ever -- there are simply so many great summer camp programs to chose from!

YNET reports on some of them:

Hamas alone is currently conducting no less than 300 summer camps for tens of thousands of children, and the focus is on familiarizing kids with the Palestinian towns and cities destroyed in 1948, as well as instilling religious fervor in them. The camps also feature sports and military-type trainings such as crawling under barbed-wire.

Not to be outdone...

Islamic Jihad has also launched its own summer camps, offering some 10,000 children activities similar to those of Hamas. The kids study passages from the Koran and participate in quizzes on religious matters, with emphasis on the required commitment to political prisoners and Palestinian land. They also learn how to hold a Qassam rocket-launcher. 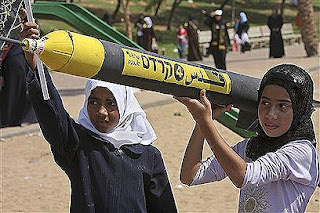 The geekier kids go to this camp:

The third organization conducting summer camps in the Gaza Strip is United Nations Relief Association (UNRA.) Fatah is abstaining from camp operation for the second year in a row, due to the limitations placed on the movement by Hamas, as well as its meager financial resources as a result of Hamas’ takeover.

Yet the report on the most alluring summer camp of all is reported on by Sky's Middle East Correspondent Emma Hurd. This veteran 4 -year-old summer camp is at an undisclosed location, and drills children for a full flat-out war and assault on Israel.

The recruits, some of whom are dwarfed by their AK-47 assault rifles, are taught how to carry out ambushes.

They are also made to do an obstacle course, crawling under barbed wire and leaping through hoops of fire while their instructors fire live bullets overhead. Hurd witnessed one training session in which a militant, dressed as a Jewish settler complete with yarmulke skull cap, was ambushed in his car. Gunmen pulled the "settler" from his vehicle and Hurd was told if this had been real he would have been killed.

She spoke to two 10-year-old recruits.

One of them, Mustafa, said he wanted to shoot down Israeli aircraft and blow up tanks.

The camp is run by a group called the Popular Resistance Committee, which said the next generation of Palestinians needed to know how to fight the Israeli "occupation".

The boys even "graduate" at the end of their training, receiving a certificate from the camp commander.

Reminds me of the two Palestinian women watching their kids play in the street. One turns to the other and wistfully says, "Kids, they blow up so fast these days."

(my word verification: idfanbpo - how appropriate)

My daughter is in camp at Kibbutz Shluchot, where they had "Krav Sakinim" (Battle of the knives)....

But no rocket launchers as far as I know.

Maybe we should give them more land. If only they more space for their camps, they wouldn't be so hateful...

Seriously, I have to wonder how many graduates of such camps have ended up in Afghanistan and Iraq. Or Tajikistan and points north.
Or, for the matter of that, Pakistan and ......... Ahmedabad?

Is that first kid crying 'cos he has a picture of Meir Kahane on his t-shirt?

PS an 8 letter word verification!!! Is that a record?

And here we are in Israel deliberating about whether revisionist Zionist history is appropriate for schoolchildren.

Do these camps teach those kids reading and basic math skills, or do figure it won't come in handy. Actually, bomb-building is basic engineering, which could be put to use building schools or hospitals...

G-d help us (and those 4-year-old soldiers who, if we and they are lucky, will get some deprogramming before they grow up to become murderers... if they wait that long.

The mind leaps to either numb horror or really bad jokes...

wow nice article..
My site learn about photography, please promotion my site I hope my site can help many friends to learn photography. Thanks for sharing..