A "Greener Israel" guest post by "A" (till I'm allowed to provide other information). 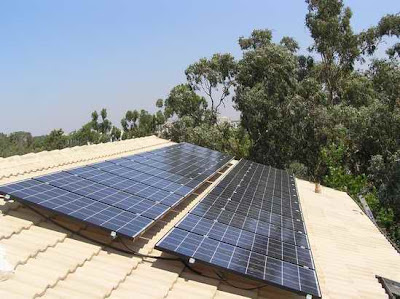 I am one of those people who don't practice what they preach. I believe in preserving the environment, consider myself green, and try to recycle. However, in reality I have a huge a carbon footprint: I have 5 children (while visiting in the States I have been told on several occasions that it was very selfish to have so many children because it strains natural resources), live in a Settlement outside the city and commute to work, have a big house , eat meat etc… I have been trying to find ways of reducing my carbon footprint/ease my conscience. To this end I went to a presentation by a company called SolarPower that manufactures a grid connected solar power system based on PV panels.

In the beginning of July, Israel passed a resolution requiring the Electric Company to buy back any solar energy produced by consumers at home. We pay ~ 0.5 NIS per KWH and the Electric Company has to buy it back for ~2 NIS per KWH. It sounds fantastic, but don't go running to get your checkbook so fast. The simple math that the SolarPower representative did was that the units pay for themselves in 10 years. Since the panels are under warranty for 20 year, you get 10 years of profit. However, what they only mention quickly and hope you won't hear it is that the transformer only is under a 10 year warranty. The transformer is expensive and delicate so figure you will need a new one in 10 years. All in all, I think over a 20 year time period we will break even if we invest in this now.

You know what, that just isn't good enough.

It is absurd for Israel to invest money in coal and oil from abroad when we have 330 days of sunshine. Much of this money likely winds up with terrorists as well. We should use the model created in the US to give people an incentive to use solar power. Anyone who buys a solar power system should get a discount in income tax. That way the system would pay for itself in 5 years and the average (read selfish) consumer would have a big financial incentive to buy it.

Unfortunately, Israel has a long way to go in terms of encouraging responsible greener policy. For example, I can get a leased hybrid car from work instead of my gasoline-only one -- and this would be much better for the environment. However, since the taxable-benefit class level of the car is above my current one, I would have to pay extra for the "privilege" of lowering the damage to the environment. While I am willing to do my part, if the government makes it more difficult for consumers to be environmentally-friendly I'm not willing to spend even more.

Reminds me of when I purchased a car 12 years ago (full price, not on oleh discount rights) -- I made sure to buy ABS brakes and airbags. Those additional security/safety features were considered "luxury" add ons, and contributed to an even higher tax price on the car! It took time, and now those "luxuries" aren't taxed any more.

And then there's the current water shortage, but that's a topic for another post.

Room for improvement, as I like to call it. Hopefully some important changes will be made, eventually.

In the US, you can buy an all-electric Vectrix moped for under $9000 - before state green incentive refunds (up to $1500 in California).

Great for all those local commutes.

Yet it is going to sell in Israel for NIS 50,000! and no government refunds.

That's twice the price! Does that make sense?

Joe- perhaps many people do not wish to purchase such mopeds due to the outcome of a crash with a regular car, van, SUV, or other vehicle.


Jameel- as you might know, in America, there are certain tax benefits afforded to those who purchase certain "alternative-fuel" vehicles. However, those tax benefits run out after a certain number of vehicles are sold. Additionally, these vehicles still sell for more than their gasoline-only counterparts. Yes, in a growing number of cases, the higher initial expense is "made back" by the car owner within a few years of purchase, but still- initially, consumers must pay to play. Consumers here still pay a higher dollar amount in sales tax on the initial purchase of an alternative-fuel vehicle compared to a gasoline-only vehicle, simply due to the higher selling price of the alternative-fuel vehicles. Yes, it would be a wise move for Israel to provide financial incentives for its citizens to reduce their environmental impact, but even here, the system isn't "perfect".

The solar-power incentives here also require much work in order to see more widespread adoption. Of course, it helps that environmentalism is quite popular currently.

At least environmental issues are now on the minds of Israelies. It's taken a long time for it to get to this point. Of course there is still so much to do, but hopefully advocates will be successful in changing the consumer habits and the mindset of the public and perhaps the government will begin to offer more incentives for businesses, farmers, etc to be able to make sure the country's environmental and the individual's health is protected.

I can relate to "A"'s feelings about the carbon-footprint issues that come with living in the 'burbs, especially since the lifestyle requires a car (not to mention the larger house, the cost to society of providing water / sewage pipes and electricity to outlying places, etc. etc.

In Israel this feeling of "taking" is in conflict with other feelings, of developing communities all over the land, and all of that.

Nice surprise to see posts on this topic on the Muqata!

One thing to consider is that it's by no means assured that carbon dioxide is much of a problem at all. Everything is very much up for debate: from the sensitivity of the climate to CO2 to the presence of any warming (look at the satellite data and see what you think). I'd recommend following Steve McIntyre's Climate Audit blog for a very sober analysis of all the issues.

The other thing is I'd be extremely wary of government incentives. The reason you can only just break even with solar has a lot to do with the state of the technology and its efficiency. Likewise with recycling: if no-one can make money at doing that's probably because it takes more resources than making new. Notice that aluminium recycling is economical because it is much easier to recycle than make new. With glass the opposite is true.

All these things can be left to the market to discover. Too often government incentives result in resources being wasted on things that take more energy and human effort than they save.

Thought about this post again today, while driving in my very comfortable Honda pilot. I hate that SUVs emmissions are not the same as cars and that I am also contributing to global warming and air pollution problems. But a long time ago, while in college, a professor calmed my worries by saying you can't change it all - focus on a few and when you can, continue to do your part for the rest.