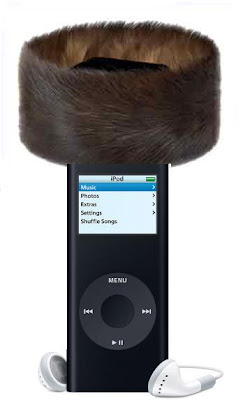 Despite the attempts to elevate the ubiquitous iPod and other similar mp4 recording/playback devices to objects that are "kosher" within the ultra-orthodox Jewish community, the Jerusalem neighborhoods of Geula and Mea-Shearim are now plastered with "pashkevils" posters demonizing the gadget and technology.

"A terrible plague is upon us, calming victims every day… these sinful devices were banned by all the great rabbis, but are still common in the haredi world… their devilish distributors want nothing more than to drive the people of Israel to sin, through movies and other abominations"

"This little device is the devil's way to try and gain entrance to our protected homes and yeshivas, disguised as something you can listen to Torah lessons through"

YNET reports that the fight against the device reached a new level last week, when an MP4 supplier, whose store is located on the outskirts of Jerusalem's Meah Shearim neighborhood, found it vandalized – its window and showcases smashed. A second store, located just off the capital's Shabbat Square, did not fare much better: It too was vandalized and its repair lab burnt down. Some say that was an event waiting to happen: For several weeks prior to the arson, a dozen-or-so yeshiva student used to demonstrate in front of the store every week and protest the sale of the banned devices. 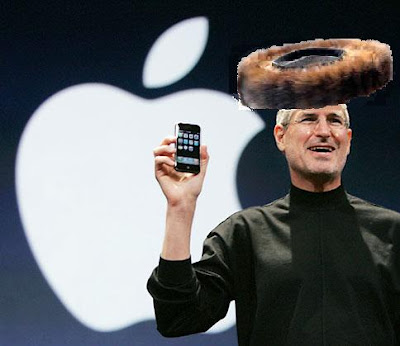 I think it's time that Apple's master of marketing, Steve Jobs, show up with some new headgear and make a personal pitch.

he should really be wearing the Spudik of Ger

Notice how the text of the pashkevil doesn't even name the device being banned. This is actually quite clever, since it allows the same pashkevil to be reused in the future to ban other technologies, with no need to alter the text.

Notice also how it doesn't name the so-called "great rabbis", either...

Lurker: It is the device "that may not be named"

What about one which only plays music? do they even realise there's a difference?

Well, I am glad to say that I don't have one of those devil devices (I'm too old fashioned and poor)!

Wow. Does the "all the great rabbis" mean their crazy rabbi?
tafka pp, you can't use music only mp3 players because of ain hara.

What does "calming victims eveyday mean?"

My husband uses his i-pod to listen to Daf Yomi everyday on his way to work.

See the device can be used for good as well as for evil.

When are they going to maka fire in Kikar Shabbat to burn the IPods?

I'm only curious about one thing. When the telephone was first invented and was suddenly being installed in every home, did the hareidim of that time period put out a pashkevil against it? Did they do so when radios for home use appeared? How about electric lights? It would seem that the Hareidim are attempting to hold back the tide of technology, and frankly, they are going to get swamped one day by a real tidal wave.

Just what are they going to do when mail delivery as we know it now becomes all but non-existent as electronic mail becomes the norm? How will they participate in the normal business of living when they ban the Internet? At least in the US, many utilities and public service companies have gone to electronic billing and bill payment. Citibank no longer sends out monthly statements and if you want one, for now you can pay $5.00 for each one you order.

Somebody has a screw loose among the hareidim--maybe they all do.

It's about time. And it's a sakona too. Someone can get a paper cut and bleed to death.

ProfK: I think the lunatic fringe has evolved over time (hah, writing that's enough to get me banned!). The emergence of technology 100 years ago was so slow, that I doubt the fringe would have cared so much.

It took years for new technologies to permeate the shtetle; there were no electronics stores in meah shearim 100 years ago...or telephones...

But, they have been very vocal against cellphones, hence the need to have a "hechsher" on phones from the "vaad l'rabanim l'tikshoret" (seriously!)

Moshe: of course paper isn't assur -- how else would they be able to print up pashkevilim to put up all over place?

Yellow Boy: I think we'll have to chip in and buy you one in order to lure you over to the dark side. (and you should know, your comments are always appreciated, even if I don't mention you specifically. You really should get a profile with an email address connected to it).

Baila: DAF YOMI ON AN IPOD? How utterly treif. As the pashkevil stated, thats only a way to get lured in to using an evil gadget, despite the "facade" of holiness.

anonymous: BOOKS. You forgot books! I went into a library with tons of books in there that weren't Sifrei Kodesh! The use of that technology must be banned. People might buy Books and read them. Burn down the library, burn the books.

Chadash assur min hatorah... and, of course, yashan is muttar. Eventually all the "new" technologies become "old" technologies. The question then is when does "chadash" become "yashan" for the "kashrut" of technologies?

There is something to be said for not jumping onto every new fad that comes along but as Jameel correctly pointed out the rate of introduction of new technology has been accelerating.

The Torah states that chadah becomes yashan after the korban from that chadash is brought. I think this could give us a clue to a rational approach to technology - after a positive use is found for it (e.g. Daf Yomi on an iPod) then it becomes yashan and hence muttar. Because even things which are neutrally muttar can be abused.

Of course, the Chareidi world is so swept up in its own cultural mores that I doubt this type of rational approach would get me very far.

Re: the "Kosher" mobile phones. How much does it cost to get a "hechsher" for your phone do you think? Who do you think gets the money? Halacha, my arse.

PS. Don't you start too Jameel! I get enough of that from "our mutual friend."

Yellow Boy: The "hechsher" was talked about alot a month ago, since Yossi Sarid's wife purchased a phone with a hechsher!

What it means is:

no internet
no downloads of content
no SMS
Something exorbitant like 10 NIS a minute on Shabbat/Chag.
no ringtones
no MP3 capability
no video
no camera
Available in black or exciting gray.

Why not open your own blog? =)

Baila: My husband uses his i-pod to listen to Daf Yomi everyday on his way to work.
See the device can be used for good as well as for evil.

Ah, so you think you can rest easy just because he uses it for daf yomi? That makes it kosher, huh?

See -- you and your husband have just become another pair of "calmed victims"...

Btw, it's not surprising that people are using this evil, treif device for things like daf yomi. Daf yomi is just another one of those new-fangled, "modern" inventions -- it was created in 1923 by R. Meir Shapiro. For thousands of years, we had no such thing as daf yomi, and we got along just fine, thank you. Did Moshe Rabbeinu learn daf yomi? Did R. Akiva? The Rambam? Nu, so it's assur.

Maybe they realized how many MP3 files are put out by Chabad and felt threatened by the sane embrace of modernity.

Jameel- you forgot one thing about the kosher phones...no games! Games are synonymous with fun, and fun is assur, remember??

One time on a bus in Israel, I believe on one of the Ramat Bet Shemesh lines, I noticed a kosher-phone-user dialing random numbers on his phone and erasing them, over and over again. After several moments of observing this slightly bizarre behavior, I came to the realization that this activity was a form of entertainment for this man. Quite sad...

Point of history. R Meir Shapiro got the Agudah to back Daf haYomi, the key event making it the phenomenon it is today. But he is not its inventor.

Daf haYomi was invented by R' Moshe Menachem Mendel Spivak (who published the idea in an Agudah journal, Digleinu 1:7, 1920).

Both were Chassidim. I think this is noteworthy, as it may play into the Chassidic notion of experience rather than the Litvisher enshrinement of ameilus baTorah. Daf has actually reduced the possible ameilus baTorah compared to a program that left the working man some time for be'iyun learning.

Yes, it is ridiculous to try to outlaw Ipod's, and it's evil to smash stores that deal with them. Yes, a pen can also be used for both kodesh and chol. And, yes, I own an Ipod. HOWEVER - the moral challenge of the digital revolution is much more difficult that that posed by pens and books. It's easy as never before for teenage boys with dancing hormones to acquire and become addicted to pornography. I wonder whether those who say that these haredim have a "screw loose" have taken proper measures to deal with these new educational issues. Those who don't appreciate the problem have a "screw loose" no less than those who think they can solve the problem with a "pashkevil" and some thugs.