Jameel has expressed reservations about Gidon Sa'ar's new bill that would dock a day's pay from anybody who doesn't vote on election day. Jameel is not so comfortable with punishing non-voters, and neither am I.

There are other, more creative ways to address the problem of declining voter attendance, however: We can try using a carrot instead of a stick. How about providing free food at the polling stations? Of course, that would require funding for the food, so we've got to find a way to come up with the money. Well, how about we have the political parties provide the free food, out of their campaign budgets? They can each set up refreshment tents near the polling stations. Election day would become just like a big shul kiddush -- everyone will want to come. In fact, each party should recruit a sponsor for their Election Day "kiddush": Morris Talansky can sponsor the "kiddush" for Kadima, Ronald Lauder can sponsor it for the Likud, Octav Botner's estate for Labor... 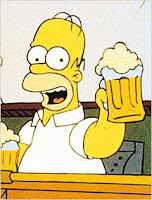 Imagine: You could get hamin at the Shas booth, kugel at the UTJ booth, humus at the Arab parties, borsht by Lieberman, geriatric food at Gil, and sushi at Meretz. (If the Third Way was still around, I'm sure they'd serve bread in a pita, and Shinui would offer a spread of shrimp and lobster.) Kadima can offer free drinks from their mini-bars, and they'll probably promise the most "fun" food to eat (but everyone who does will develop an upset stomach by the time they get home...).

So how about it? It's a sure-fire way to boost election attendance. (Unless, of course, Jameel is serving waffles at the Muqata that day.)

and Alei Yarok would serve those special brownies :-)

Hilarious.There is nothing that will bring a Jew out more than food.

This is the funniest post I've seen for a while! What would the Men's Rights party serve??

tafka PP: What would the Men's Rights party serve??

Not quiche, that's for sure...