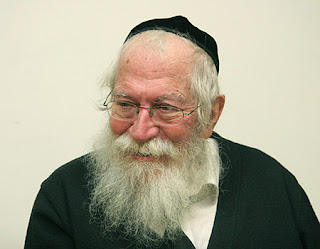 One particular issue which makes people get all queasy is that of organ donation after death. In the US, HODS (Halachik Organ Donation Society) is spearheading the effort for raising consciousness and educating people about organ donation, and halachik (Jewish religious law) options for organ donations.

In Israel (as could be expected), the issue is even more controversial. The ADI organization is the exclusively approved organization responsible for cataloging potential organ donors -- and they issue cards for those willing to donate organs after death.

Till a few days ago, the final word in the Chareidi world was based on the ruling by Lithuanian chief rabbi R' Yosef Sholom Eliashiv -- who adhere's to the traditional definition of death as occurring with the cessation of cardiac activity. This limits vastly the range of organs that can remain viable for donation.

However, in what is being viewed by many as a potential earthquake to the Chareidi world, R' Zalman Nechmia Goldberg (bio in Hebrew here -- pictured above), scion of a Lithuanian Jewish family (and son-in-law of R' Shlomo Zalman Auerbach), has given a dissenting opinion that religious Jews may sign the ADI card, yet should use the check box "organs may be donated only after approval from a religious authority of the family's choosing." R' Goldberg adds that the card should be modified to include the specific Rabbi the family should consult with.

Though there are many Orthodox Rabbis who have signed up for the ADI card or through HODS (great list with pictures of Rabbis and ADI cards here), the ruling by R' Goldberg has the potential to change the current Chareidi mindset towards Organ Donations as well.

Yes, it makes me queasy to think about the topic, but I still signed up for the card. 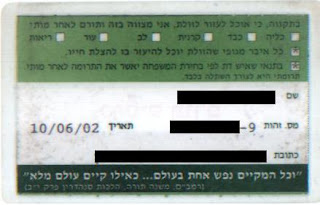 Save a Life -- Sign up in Israel for an ADI card, here.

More information about HODS in the USA, here.

List and pictures of Donors, Recipients who lives were saved by organ donations.

the ruling by R' Goldberg has the potential to change the current Chareidi mindset towards Organ Donations as well.

I'm not so convinced. Chareidi mindset tends (ideally, at least) to be that of RZNG (as quoted at the so-called Yeshiva World): "each person is compelled to follow the derech of his rav."

Looking at the lists of Rabbis of various standing provided by HODS is not the way most chareidi pasken shailos.

OTOH, hopefully it will moderate some of the legal opposition, recognizing that it can no longer be called completely assur l'chol hadeios.

Ignoring the issue about Organ Donations, the real potential for an uproar is that RZNG has basically said "Just because RYSE said that it's assur doesn't mean that everyone else is wrong. It doesn't mean that either side is right because we have a legitimate argument in psak so everyone follow their own Posek."

It's not going to cause a huge rush of Chareidim to sign the card (unless they do so and put RYSE as the Posek to be consulted; leHach'is).

Kol hakovd to R.Z.N.Goldberg for standing up for his halachic opinion.I hope it effcts Charedi thinking.

What's missing is Rav Zalman Nechemiah's opinion as to whether the consulting Rav is permitted to pasken that the patient's heart may be removed after a determination of brain death.