An Amazing Graduation -- Living the Dream 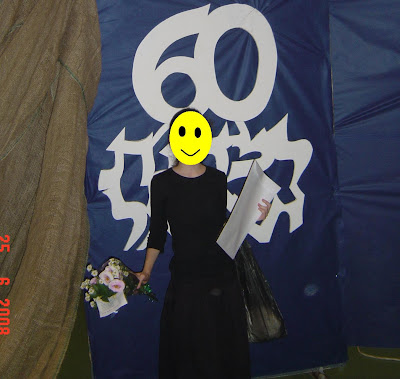 I can be proud of my daughter's graduation tonight from sixth grade and that she is starting "Ulpana" (Jr. High). Not proud that she "graduated" (its pretty hard to not graduate from 6th grade) -- but proud of the actual, impressive ceremony. In fact, it was as if the Muqata blog had written and directed the entire evening; sound, light, video, effects, Eretz Yisrael all rolled into one (though no one was wearing a yellow smiley face).

The "theme" of the evening was the "impending redemption" -- and the boys and girls had separate presentations (they aren't mixed in school either). The primary artistic presentation was about a class going on a forced museum trip, where they encountered different historical characters who came alive at the mention of the word "Geula" -- redemption. (The smoke machine and strobe added some cool effects).

Avraham Avinu proudly congratulated them for building up the land, and proving G-d's promise of לך אתן את הארץ הזאת -- "to you I will give this land".

The class comforted Rachel the Matriarch that her children were returning from Exile and rebuilding the land. How poignant was it that the class reminded her that some children were still missing and needed her prayers; Gilad Shalit, Ehud Goldwasser, Eldad Regev, Ron Arad... how current events mesh with our lives...and we don't even forget our missing soldiers -- even at a 6th grade graduation.

The class met a group of Jews...who were going to trash the store of "Shmuel the Shoemaker" -- because he was working on Shabbat. R' Kook arrived on the scene and told the crowd that only through "Ahavat Chinam" would the redemption come.

Yoni Netanyahu met the class as well -- one who gave his life for Ahavat Chinam -- on behalf of the Jewish people in his daring rescue mission at Entebbe.

Ben-Gurion, Naomi Shemer, and others characters met the class, all through the theme of "redemption" -- how close it is...how close it can be.

The following background painting summed it all up perfectly: 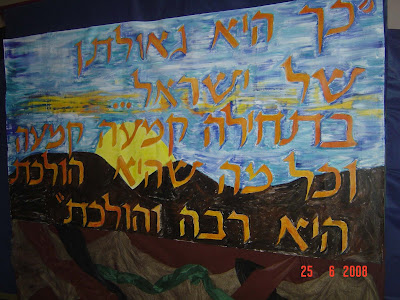 "Such is the redemption of Israel:
first, it is bit by bit,
but as it goes on,
the light continues to grow..."
(Mevaseret Zion -- here)
As the play ended, the sounds of the shofar erupted from all corners of the gymnasium.

May we merit redemption soon -- I could not be more proud of my daughter, her class, and her school.

Living the dream day by day, in Israel.

Email ThisBlogThis!Share to TwitterShare to FacebookShare to Pinterest
Labels: life in israel, Living the Dream

Mazal tov on this milestone in your daughter's life. May you be zocheh to many others. The graduation play sounds wonderful and surely gave the students many wonderful memories to take with them into the future.

Ulpana already?? They really DO grow up fast!!

Wow. Amazing. I can't wait for my kids to graduate in such a fashion.

And thanks for reminding me of that post of mine! How did you find it?!

Congratulations to her and to the family!

Thanks people! And now...I'm off to a (work-related) tiyul to the Kinneret :-)

(mevaseret: google search is your friend...I was looking for a good translation of קמעה קמעה" and found yours)

forget ulpan. tell her to get a job.

Mazal Tov!! My daughter also graduated and will be entering an ulpana in September, be'ezrat Hashem...

May G-d grant them both good health and many more celebrations ad meah ve'esrim shana!

mazal tov! to you, her and the whole family.
i guess you cant answer me here which ulpana shes going to, wondering if our daughters might be in the same school in a yr.
glad the ceremony was so special.

(BTW, let's not forget that Maran HaRav AY Hacohen Kook led the first hafgana l'maan haShabbat in Yerushalayim. IIRC, it was when a theatre was going to open on Shabbat.)

Wow - that sounds like one amazing graduation! Got a tear in my eye just reading about it. Thanks for sharing.

It's too bad EliYahoo HaNavi, David HaMelech, Ze'ev Jabotinski, and Rav Meir Kahane couldn't make it to the ceremony as well.

BTW- is she going into the 7th grade, which would put he in the class of 2015 or is she a 4th'er (Revi'ist) to join the 67th aniversary graduating class since the founding of the modern state?

Baila: Mazal tov to you as well! Much nachat...

Faith: Thanks. Hey, our boys were in the same MDA course, so I guess the school Ulpana can work out for the girls...

Mordechai: The point about R' Kook was HOW to deal with chilul shabbat. Obviously he was against it.

Anonymous: The skit lasted for hours....I dont think there was time for additional guest characters :)

Blast it, I can't get all teary-eyed, I'm job hunting right now!

Mazal tov on a wonderful event!

A hearty "mazal tov" to you and your family. May she go on to Ulpana, then ulpana high school, then sherut leumi or army service (her choice), then college, get her degree and have a great profession where she can support herself or contribute to her family's support.
And of course, she should find her basherte , marry and have 10 kids. AMEN, ken yehi ratzon.

mazel tov- it sounds like it was very beautiful. My girls had pretty stirring,emotional gan "misibot siyum". I got teary from those, I don't know why.

very beautiful, and i hope my kids have a meaningful graduation as well.

but this whole event also highlights the problem of rz the problem which muqata has attempted to deny: the focus of rz exclusively on israel -- what about jewish prisoners elsewhere? -- is readily apparent from this whole presentation. nothing about mesoras hamitzvos beyond just living in israel.

First of all, the play also included Yosef Mendelovitz as a prisoner of zion, in the USSR (but I forgot to mention it)...I also didn't mention Naomi Shemer who was in the play.

The focus of RZ on Eretz Yisrael? Nothing about mesoras hamitzvos beyond just living in Israel?

Tell me, when you daven shmona esreh - why is your focus on Yerushalayim and not Bavel or Monsey? The mesora of mitzvot in chutz laaretz? There is no such thing -- the mitzvot are supposed to be done HERE. The Amoraim who tried to start doing Kiddush HaChodesh in Bavel were severely chastized for doing so.

Jameel-
I agree with you %1,000,000 that the essence and present and future of Jewish life and of Torah is in Israel. To me, the diaspora Jewish community is becoming increasingly irrelevant to the future of Judaism. (I've been mentally drafting a post about this for weeks now.)

But I think you mis-read anonymous 8:50 - if I read it right, (s)he was saying that the focus of RZ is on living in Israel, and not on further fulfillment of mitzvos.

the rebbetzins husband understands me correctly.
and for the record, i live in jerusalem, al quds.

anonymous: OK...let's take the Rebbetzin's Husband's psak of what you meant. "that the focus of RZ is on living in Israel, and not on further fulfillment of mitzvos"

How does one see that from the play/posting that I wrote about?

It includes Chessed, Geula, Mesirat nefesh for Am Yisrael, appreciating Shabbat and more.

This blog has focused on dozens of mitzvot and issues, as does RZ. In fact, my kids in Bnei Akiva have very little to do with focus on Eretz Yisrael, but spend the majority of their time involved in other mitzvot including chessed and chinuch.

The highlighted aspect of this blog and focus on Eretz Yisrael is because so many do not understand that living here (according to some) is a mitzva kolelet; an all encompassing mitzva.

While perhaps you (and others reading this blog) are aware of that -- so many are not.

pretty much all of the moving performance surrounded the land of israel. chessed and misiras nefesh -- to mention 2 examples -- were israel-based, not tradition/judaism based.
and you know, the geulah can kick in even with jews outside israel.