Despite the skeptics, Israel is truly a modern miracle.

Hebrew has been revived and is a thriving, vibrant language. While Yiddish still thrives, it is obvious to all that Hebrew is the common language of the Jewish people. One of the sweetest aspects of Hebrew's rebirth are idiomatic expressions based on Jewish history and religion. One of the newest expressions flying around the country now (introduced to me by my brother-in-law in the IDF this past Friday), is "עף לי הסכך" -- my "schach" has blown away, or in modern slang, "I was blown away."
On a physical level, the deserts have bloomed and the trees of Israel have welcomed home the Jewish people with fruits, produce, and agricultural bounty after a 2000 year hiatus. 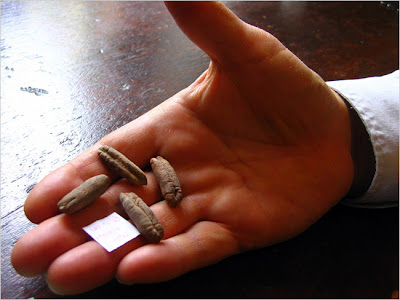 Yet the miracle continues; the Judean Date Trees, the extinct species of large, sweet dates that once populated Eretz Yisrael is carefully undergoing a miraculous rebirth as well.

Seeds found on Masada in the 1960's were carbon-dated back close to 2000 years ago, and one of the seeds has sprouted! The NY Times wrote up the story in it's science section...

Scientists in Israel have confirmed that an ancient date palm seed retrieved from the rubble of Masada and successfully germinated is about 2,000 years old. That makes it the oldest seed ever to sprout, beating the previous well-documented record holder, a lotus found in a dry lakebed in China, by about 700 years. 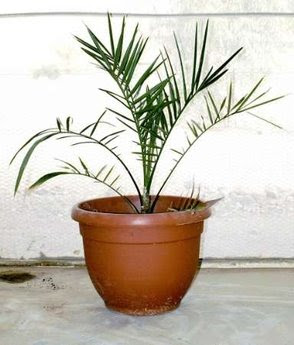 The date seed was among several obtained in the 1960s by archaeologists excavating Masada, the fortress in the Judean Desert built by Herod around 35 B.C. and destroyed by the Romans in A.D. 73. In 2005, three seeds were planted by Sarah Sallon of the Louis L. Borick Natural Medicine Research Center, part of the Hadassah Medical Organization in Jerusalem.

One seed germinated, and three years later, Dr. Sallon and colleagues report in Science that the resulting plant is healthy and more than three feet tall. Radiocarbon testing of shell fragments of the seed obtained when the plant was repotted at 15 months show that it dates from the time of Masada.

The researchers say that the high summer temperatures and lack of rainfall in the desert may have helped keep the seed viable for so long by reducing the generation of free radicals, which cause oxidative damage.

The Judean Dead Sea region around the first century A.D. was well known for its date palms that produced fruit of high quality, but over the centuries this line of plants was lost. Genetic analysis of the germinated seed has provided just limited information about this ancient line. The researchers say more seeds are needed for a more thorough understanding of what made those old dates so good.

Assuming the date tree bears fruit, and is female** the researches hope to repopulate Israel with these trees.

We can add this to the list of amazing accomplishments of modern Israel...along with the revival of the mitzva of tekhelet.

Israel: Where the extinct is reborn.

The revival of this once-extinct species may yield some very important information, and may lend itself to more uses than just cuisine. Judy Siegel-Itzkovich, the Jerusalem Post's medical correspondent, reports that "the date project is part of the NMRC's [Natural Medicine Research Center] Middle Eastern Medicinal Plant project aimed at conserving, developing and researching the rich legacy of medicinal plants in Israel. The extinct 'Judean date' is regarded by NMRC as having particular importance". This is because the Judean date "was renowned in ancient times as a treatment for heart disease, chest problems, the spitting of blood, weakened memory and other medical conditions, possibly even symptoms of cancer and depression."

So it is entirely possible that the anticipated revival of these dates may portend the development of new medical treatments.

**Dioecious (Male and Female) Date Trees. I was unaware that some fruit trees are male and female. Such is the wonder of blogging - you can learn something new every day!

The date palm represents the earliest recognized example of the dioecious condition. As early as 3500 B.C., the farmers of Mesopotamia recognized that there were male and female trees and practiced artificial pollination by bringing clusters of male flowers in contact with female flowers. The methods of bringing about fruit production in the date palm today differ little from those practiced in ancient times. Male trees to provide pollen are grown with female trees, which bear the fruit.

In Arabic lands, the cutting of male trees was practiced when war was being raged between tribes. The opposition would sneak into their enemy's palm grove and destroy the male trees. As a result no fruit would be produced. Since dates were a stable item of the diet, starvation was induced. The reason for removing only the male tree was that only a few were needed for a large palm grove. It did not require as much time or effort to remove the male trees as it would have required to remove the more numerously planted females.