Anyone know this guy? 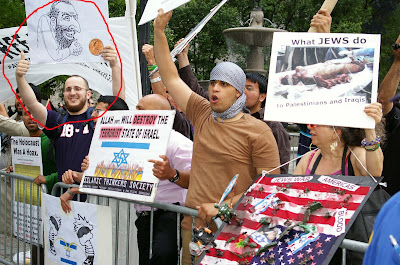 I know lots of people whose political opinions on Israel lean towards the left. As long as their intentions are genuinely for the benefit of Israel and the Jewish people, I really don't have a problem with them at all (and I'm even friends with a bunch of them).

The problem is that when you sleep with dogs, you wake up with fleas.

Even with the most altruistic of motives, when leftists bands together with pro-Palestinians to protest the Israeli day parade, the blatant anti-Israel, anti-semitic and anti-American riff-raff join in.

See the above picture from this past Sunday's Salute to Israel day parade (the photographer has asked to remain anonymous, but sent me the picture personally). Neturay-Karta, Pro Palestinian Jewish Leftists, Pro-Palestinians Muslims, and many others demonstrated against the parade, and according some reports, delayed parts of the paraders from marching for up to 2 hours.

The smiling person in the red circle is holding a sign that includes a wonderfully anti-semitic caricature of a bearded, big-nosed "Jew" next to a penny, with the headline (unfortunately, cut off in the picture) "Happy 60th Birthday you Cheap, Murderous, Coward Apes" (The other pictures speak for themselves).

The photographer asked that I publicize the following message:

Have you seen this man circled in red?

He was last seen at the Salute to Israel Day Parade Sunday June 1, 2008 carrying a sign whose text on top (not seen in the picture) read "Jews are Apes and Pigs."

Presumably he lives in the tri-state (NY) area. If you see this man, please convey to him - to the greatest degree possible - your displeasure at his sign."

Updated: More pics and commentary over at Israellycool.

Other pics with our "friend":

Thanks Aussie Dave -- I updated my post and included your link.

Knew I could count on IsraellyCool :)

Was there and we did yell at him through the police line.

Have you seen this man circled in red?

Or maybe we were just both holding the same sign...

Hah, that's just one man. We have so many more and so many worse in the Bay Area.

This next page has some of the most venomous and interesting (WARNING: also several UNTZNIUSDIKKE!!!) photos of Bay Area political loopiness:
http://www.zombietime.com/hall_of_shame/

It presents a choice of navigational links to Zombie's files. It's a very good resource.


As you can probably guess, Zombie's many photo-reports on SF poison have not won him or her any friends. The other side has made repeated rumbles about "dealing" with Zombie. What they mean by that can only be imagined. So please enjoy Zombie while he or she is still around. When he or she is "gone", the Bay Area will be a darker, nastier, and more dangerous place.

I think that I might have bumped into him.

I am surprised to see such concern for one man. But hey, we are very public. SO try to trace my ip and you will know i live in NJ not nyc, even though i used to live there. I hope those posters pleased you like it did to me :)

have a good day you jewish pigs

Anonymous @ 10:22 is a phony and an impostor, and is trying to steal the credit from me. He doesn't even have the guts to use his real name, like I do.

And he's a weak-kneed softie, too: You'd never find me saying "Have a good day" to Zionists...

I know him. He is a blogger who goes by the name of DovBear.

You make me chuckle. Funny troll.