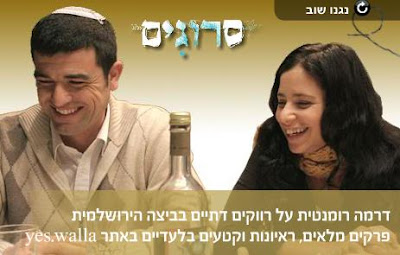 Focusing on the religious singles scene in the Katamon area of Jerusalem, "Srugim" tackles many situations including; joint shabbat meals, young divorced singles, being shomer negiya (or not), life as a single when friends around you are all married with children, the dating scene, Ohel Nechama, and basically every situation of day to day life for Jerusalem's religious singles.

Though the actors themselves are not religious, the director and screen writers are -- and they needed to quickly get the actors up to speed on what to do...and not do, as religious singles. The previews and behind the scenes show look promising, so this looks to be a decent show.

Of course, personally knowing the director means I'm not biased in the slightest.

If you're going to watch TV, don't waste your time with Hisardut/Israeli survivor trash shows - watch a quality series, by a talented director and graduate of Ma'aleh, Israel's religious film and art school.
Ten Tonight.

Oh no...think I experienced too much of the reality.

Besides, I will probably see characters of my demographic and find myself crying at how they are portrayed/viewed.

Having seen his previous work and knowing his parents well, I'd guess that it will be a good show although already the rumblings are being tom-tomed.

That should be "knowing his parents, his late mother and his, bis a hundrid un tzvuntzig, father..."

for anyone who missed it you can watch it online. yes.walla.co.il

Actually - I really enjoyed it!

Gila -- the characters (IMHO) were pretty realistic and brought up all sorts of issues. I'll try to blog about it a bit later.

Always with the "Hisardut" dig, huh? I actually caught the last 5 minutes of this show, and thought, hey those people are religious, aren't they? There was even a line, "I knew him in Bnei Akiva". I'll try to catch the whole thing next week.

I saw it online. Found it kind of depressing. Made me think "what can I do to ensure my kids won't have to suffer through that!"

Baila: It's on online (link above) and none of the actors are religious!

(Did you know that the "Nati" is played by Ohad Knoller?)

The director is religious...which is why the show looked and sounded rather authentic (for a change).

Chardal: Yes, it was slightly depressing, but the point of the show was to find some of the humour in this depressing situation.

ooh... i need to find it online. good practice to see if i understand any of the ivrit.

(Hisardut did not require knowing hebrew b/c it was exactly the same as the other survivor shows.)

>Yes, it was slightly depressing, but the point of the show was to find some of the humour in this depressing situation.<

Yeah, I hear you. I think it also overplayed the whole "feminist" angle. The people with the discomfort were always those who were not feminist where in reality, I think that often, in the "migzar," those with feminist tendencies often feel a bit uncomfortable expressing their opinions.

All the feminist characters were sort of davka-niks

There are davkaniks everywhere...even in Katamon. In fact, the guy's reaction was perfect. (BTW, her davkanik expression of feminist tendencies was also because of her recent boyfriend breakup)

Sarah: Its worth watching!

Does the director's name rhyme with lazy?

You can get away with a nikname like "Laizy" in Israel, just like some other great Israeli names and niknames;

Awww I want subtitles! This would be like watching a show about the UWS...or my 'hood. ;-)

just watched and enjoyed it...my favorite (not!) character, Stacey the American--her accent made me cringe! Is that how Israelis see us??? Yikes!

Re: the feminist angle. Sorry, it wasn't "overplayed" at least in my experience in circles both in the "bitza" and on the UWS. I regularly made kiddush at my shabbas table when I was single (the difference is, no one batted an eye) and most of my friends would have responded similarly to Micha's oh-so romantic marriage proposal. What was "overplayed" about it?

Nofeet and Sneer- now there is a pair for you.

I have waiting for a Jewish version of Sex and the City for years- now if only they could bring the show to American audiences.

Anyone know where I can get subs for this?

ya- walla link doesnt work in US anymore-any idea where i can download the shows?

I am visiting Israel and just heard about the and watched the first episode online. I don't understand hebrew but understood what was happening. I and from Los Angeles and the orthodox singles community is small. I wish we had group of single professionals to associate with. I know many men who eat alone. This show is beatiful and not depressing. It reminds of when I lived in the UWS. Now bring to America. A real positive view of orthodox single professionals. Makes me want to make Aliya.

Hi Anonymous - The show gets more depressing over time, but only because its a reflection of Jerusalem's Orthodox singles reality. From the outside, I can imagine why the situations here looks infinitely better here than in LA (or even better than the UWS).

The depressing side is when those find themselves entrenched in the "swamp" for year after year without finding a spouse.

I'm glad that aliya is in your lexicon, and look forward to when you will move here.