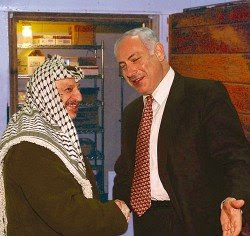 A guest post by Lurker:
He's not even waiting until after the elections...
Netanyahu: I'll continue peace talks

Opposition leader Benjamin Netanyahu said that if he wins the upcoming elections, he will continue peace talks with the Palestinians.

Netanyahu's office has said that peace talks launched last year by US President George W. Bush have failed to make headway, and he has signaled he would cut off the negotiations if elected.

But after meeting with Quartet envoy Tony Blair in Jerusalem Monday, Netanyahu said that he would move peace negotiations forward if he wins the election.

Cleary, it's the same old Bibi.
Think Benny Begin will have anything to say about this?
If not, that will be the sign that he's sold out, too.
And so it begins...
Wherever I am, my blog turns towards Eretz Yisrael טובה הארץ מאד מאד
Posted by Lurker

Perhaps he is merely pandering to the new American administration.
I certainly hope so....
But if he continues with this rhetoric, he definitely wont get my vote!

And he is dissing Effy Eitam!

And he is dissing Effy Eitam!