Comparing secular teachers to the Amoraim? 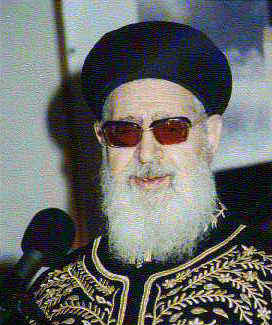 This past motzaei Shabbat, R. Obadiah Yosef ignited a political/media firestorm, as he is wont to do from time to time. In his weekly drasha, he referred to secular school teachers as "asses"
("חמורים"). This drew the umbrage of numerous figures across the political spectrum. Typical was Education Minister Yuli Tamir, who called the comment "rude, baseless, and offensive to tens of thousands of public servants who faithfully carry out their difficult work".

But were the rabbi's critics fair in jumping to the hasty conclusion that R. Obadiah was insulting the teachers? Perhaps not. Many people forget that R. Obadiah expresses his ideas in esoteric Talmudic idioms, that are not readily understood by the likes of am haaratzim like Yuli Tamir.

When the rabbi called the teachers "asses", it is quite possible that, in fact, he meant it as a compliment. Only a few days ago, one JBlogger asserted that when the angel told Hagar that her son Yishmael would become a "פרא אדם" -- a "wild ass of a man" (Bereishit 16:12) -- he was actually blessing Yishmael, by declaring that Yishmael would become a desert-dweller as "successful and resourceful" as a "wild ass". Perhaps R. Obadiah was alluding to this, as a way of praising the secular teachers for their success and resourcefulness.

Who will explain to us now that the rabbi meant his statements as a compliment?
Lacking outstanding interpreters, I offer my services: Yosef is obviously basing himself on the Gemara, and the Gemara states2 that "[R. Zeira said in Rabba b. Zimuna's name:] If the greatest of [the early ones; i.e., the Tannaim] were angels, then we [the Amoraim] are but human beings; but if the greatest of [the early ones] were only human beings, then we are [like] asses [and not even like the ass of (the Tanna) R. Hanina b. Dosa or of (the Tanna) R. Pinhas b. Yair, but rather like other asses]." If that is the basis, what is all the fuss about? [The Tannaim] were not angels, that is already clear. At most they were human beings, and that is no small accomplishment, either. Therefore, under the circumstances, as the generations are in decline, we are doomed to be asses. The rabbi did not mean to exclude himself from this rule, heaven forfend: He is also among the asses.

Sarid is to be congratulated for his illuminating clarification of R. Obadiah's words. I would take issue with only one point: Sarid suggests that R. Obadiah "did not mean to exclude himself" from Rabba b. Zimuna's classification of "asses", and that R. Obadiah, in fact, regards himself as "also among the asses". This is surely incorrect, as R. Obadiah would never be so presumptuous as to place himself in the same category as the Amoraic "asses". He would undoubtedly classify himself as something considerably less.

1 Meretz is an Israeli political party; home to such haredi luminaries such as Tzvia Greenfield.

2 TB Shabbat 112b:
אמר רבי זירא אמר רבא בר זימונא: אם ראשונים בני מלאכים, אנו בני אנשים; ואם ראשונים בני אנשים, אנו כחמורים, ולא כחמורו של רבי חנינא בן דוסא ושל רבי פנחס בן יאיר, אלא כשאר חמורים.
This is a statement made by an Amora, contrasting himself and his Amoraic peers with the Tannaim, who are referred to as "ראשונים" ("the early ones"). Note that the English version of Sarid's article incorrectly translates "ראשונים" as "our biblical ancestors". This error (corrected above) is certainly due to the am haaratzut of the Haaretz English editorial staff; not to Mr. Sarid.

Why must others "clarify" his words? Hasn't anybody just asked ROY what he meant?

BRAVO Jameel!
That is, for posting Lurker's quick witicism.

Tzipporah: Why must others "clarify" his words? Hasn't anybody just asked ROY what he meant?

That's a good question -- I'd recommend asking him why.

Of course, any answer you get will come from his spokesmen...

Neshama: BRAVO Jameel!
That is, for posting Lurker's quick witicism.

Hey, I posted it myself.

(Jameel is busy at a seminar on another planet.)

But on the other hand, we all remember that Balaam's ass saw what Balaam did not, and thus proved himself a better..... ass.

So in this way also, a distinction is drawn between those with the kdoosha of non-secularity, and those with the clarity of vision and perspicacity of secular lomdus.

The saintly are blind, the learned see.

Wise words, indeed. Kolhakvod, tayere rav Ovadiah. This blogger wishes you much hatzlocha in your pursuit of wisdom.

Back of the Hill

She (female) proved herself a better ass. Balaam's ass was an "aton" אתון female of the "donkey" חמור
proving once gain that women are at a higher spiritual level.