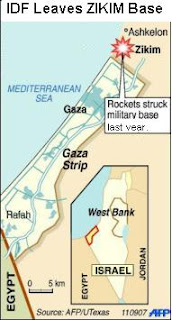 In one of the more shameful acts of Israel's flight from terror, the IDF today closed its basic training "Zikim" facility in the Ashkelon-Gaza vicinity. This base had previously received it's share of Palestinian rockets, and a direct hit last year wounded 69 soldiers, some of them critically. Instead of retaliating, Israel's government and the IDF have chosen to flee.

The flag lowering "ceremony" saw four of the seven company flags usually flying on the base taken down, as the "training facility" part of the base was officially closed.

Though the IDF stated that "...the decision was made regardless of the rocket threat looming over the area, and that the fact that the base itself was hit by Qassam rockets several times, played no part in the decision," you would have to be rather naive to believe them.

Former Zikim IDF company commanders stated that "...the overall feeling was that the IDF was fleeing the base. Civilians are dealing with rockets landing in this area everyday," said one officer, "it's only appropriate that the military will have recruits here."

"If this was a legitimate ceremony you would have seen a lot more senior officers here, and probably the media," said another. "I guess the military is ashamed of what's going on."

The Gaza vicinity communities were not too happy with the decision to vacate Zikim either: "Whatever the reason, you have to think about how Hamas is seeing this move," one of the communities' security director told Ynet. "In their eyes it's a victory." (YNET)

This reminds me of how during the September 2000 Palestinian war on Israel, the resident of the West Bank Jewish communities would drive around in their regular cars, while the IDF would only allow their soldiers to drive in armored cars.

The IDF now flees the Gaza Qassam rockets -- and the message from Israel's Government to the Gaza vicinity towns of Sederot and Ashkelon is; "good luck, don't forget to turn out the lights."
Wherever I am, my blog turns towards Eretz Yisrael טובה הארץ מאד מאד
Posted by Jameel @ The Muqata

This sounds very familiar. Didn't they do this a few months ago? Or did I dream it? Or is this a SECOND base closing?

I did boot camp there.

What do expect from an army which advertizes itself like a summer camp? My fil bought the video from the elite unit son #1's swearing in ceremony.

The commentary:
"Your dear little son is away from home for the first time... We will take good care of him...."