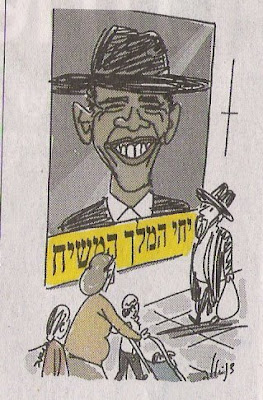 Its unfortunate that one can't criticize President-elect Obama's policies any more without being labeled a racist.

(Cartoon on left, hat-tip to Yisrael Medad, via Elder of Zion. If you don't "get it", no explanation will help)

Is satire even permitted?

What will Saturday Night Live do?

Israeli Orthodox Jewish, kippa wearing, settler-supporting columnist, lays it out for us.

I am very sorry to disappoint you, but only two days have passed since Barack Obama's victory, and I still do not have firm conclusions. I haven't had the time to come up with them yet.

Moreover, even though a whole 48 hours have passed since Obama's victory, I still do not know whether his election triumph is good or bad for Israel. And it gets even worse: Not only have I failed to formulate an opinion in the past 48 hours, I am not even certain that in the past 48 years I have been able to form an opinion in respect to what is good or bad for Israel, which makes the situation even more complex. (rest is here)

Here's a great video clip of Barack Obama roasting Rahm Emmanuel in 2005 for a charity fundraiser of Epilepsy. If he can make fun of his future Chief of Staff, I don't think he would have a problem accepting honest policy criticism (or satire).

In fact, I don't think Obama's the problem at all -- its those that accuse everyone else of being a racist if you don't fall in line and say "Amen."

I don't think there will be a problem in the ability to criticize Obama. At his first press conference, he made a comment about Nancy Reagan. He was criticized for it and later called Nancy Reagan and apologized to her.

He has also been criticized because his web-site said all kids in middle school and high school would be required to participate in community service projects, e.g. Americorps. The wording has since been changed to say it is voluntary.

Also, when he made his speech on election night, he made the comment he would fulfill his promise to his daughters to get a puppy. Many were calling for him to get one from a rescue shelter. In the press conference the other day, he said he would like to be able to get one from a resuce shelter but his family needs to have one that will not cause any allergy problems to his family and it is very difficult to get such a pet from rescue shelters.

In other words, he responds to criticism without calling it racist.

I have no problem being called a racist. The tewrm racist no longer has any meaning to me. You see they have taken the word racist and turned it around, they voted for Obama because of his color not because of his policies. They are flaunting and touting his race. I don't care is he is yellow, grey, pink or striped. I see him as black outside and communist red inside.So if they want to call me racist for showing that that the emperorhas no clothes, so be it!

I'm a white Jewish voter, and I voted for Obama because of his policies, as did many others.. Why are Torah observant Jews so damn crazy? You see, here in the U.S. we're excited Not because we elected Obama because of his race, but because we could elect a capable candidate, no matter what race he is. Get it?
Get over your preconceptions and move on.
I imagine that this "yitz" would probably have labeled FDR a Commie as well, perhaps he still would, but this lack of enlightened thought by the orthodox is downright disconcerting to the more progressive people of the Jewish faith.
I too happen to be "Orthodox," just in case you were wondering...

anonymous: "Why are Torah Observant Jews so damn crazy?"

What the heck does that mean? Torah observant Jews voted for Obama...and for McCain.

My response was to other commenters in a previous post who complained that anyone who thinks Obama might not be the best candidate is automatically a racist. (And any criticism of Obama is forbidden)

Jameel, perhaps if you didn't preface it with "Its unfortunate that one can't criticize President-elect Obama's policies any more without being labeled a racist."

What makes you think that you can't criticize Obama? Has he or any of his campaign people ever pulled that card about is candidacy and criticism against his policies? And furthermore, aren't you jumping ahead - what policies has he made? He's not even the President yet and you are already showing a distaste for something that hasn't happen yet.

Yes, observant Jews did vote for OBAMA, (there is witty group of supporters on FACEBOOK, but it does seem that their there more against OBama than for - which is based on what? Palin was quoted as supporting and standing by "the peace process" and how do you know that McCain also wouldn't continue along that path? Because he's a republican - Hello .... Bush and Rice didn't seem to be out there trying to save our butts and land rights.

Is it because Republicans seem to be more "religious" or "spiritual"? Right ....

Jaime: Jameel, perhaps if you didn't preface it with "Its unfortunate that one can't criticize President-elect Obama's policies any more without being labeled a racist."
What makes you think that you can't criticize Obama?

If you haven't already, I suggest reading my post on this.

Jaime: What makes you think that you can't criticize Obama?

Of course you can't make jokes about Obama.

He is the Messiah.

It would be blasphemy.

By the way, how's that temple mount coming along? Have you started building the temple on it.

Obama needs it soon so he can declare himself god among men.

Any critisizm of obama or his followers have been shot down by racism on any forum or on any level.

This is what happens when someone is elected due to race, not qualifications.

The democrates puposely divided the country by making this all about race, as they care more about power than this country.

Qualifications are what other candidate had, not a JUNIOR, first term senator who was not chair of any commitees.

I am a Black man and I did NOT vote for obama as he is not experienced enough for the challanges our country faces.

The treatment I have recieved from other people of color when I voice my opinion makes it obvious that this is about Race.

I object to the way that the Man has assumed that they can use people of color by floating Obama as one of US.....

I am ashamed that so many people of color bought into this.

He is 1/2 white, and 1/2 kenyan national, not representative of African Americans who have suffered in the past through iniquities.

It is sad that people bought into this.

All the comedy shows I'm aware of, even those sympathetic to Obama (like Jon Stewart), have indeed made fun of the reverential, almost worshipful attitude of many of Obama's supporters.

In fact, one of SNL's themes during primary season was that the media were fawning over Obama while treating Hillary Clinton unfairly.

Still, many of the comedians have had trouble maintaining a consistent narrative for skewering Obama. His campaign was nearly flawless, and he just hasn't been as easy to pin down as Biden, Palin, and McCain, all of whom are almost walking parodies. I'm sure that will change when he enters office.

Jameel, I live in Teaneck, and my kids go to a religious day school ,and recently the principal had to send out an email because he had been hearing children in the hallways making offensive-- yes, racist-- statements about our president elect. Obviously, it came from their parents. I spoke to other people who told it it was going on in their kids' school as well.
In the day school mock elections, McCain won by an 80/ 20 vote. I live here, and I hear what is said in shul. THAT'S why I say orthodox Jews are so crazy. And I was also responding to the commenter "Yitz" who suggested that this is all about race. It's very sad to listen to all this nonsense from people who should know better.

Yes, it is very sad, and its pathetic that there's racism in any community.

If youre brave enough to drop me an email, there's something I'd like to tell you.

Jameel, I'm not going to email in order to preserve MY anonymity.
If you regard the cover of the Jewish Week or the Jewish Standard, you'll see what I'm referring to. You see, an atmosphere of Obama bashing/ liberal bashing/ racial bashing/ dislike of the other leads to similar attitudes in our children.
Go figure...

Yeah, way to poke fun at people who see racism when it might not be there instead of at the appalling number of actual racists in your community. Here's some food for thought: don't you think the number of people who are covert racists is at least as large as the number who are open about it? Then why all the outrage when someone suspects racism when Orthodox Jews are hysterically paranoid about Obama?

Clean up the overt racism in your midst before you complain that people are suspecting racism in those who aren't overt about it.

Who wrote "I'm a white Jewish voter, and I voted for Obama because of his policies"...

O.K.
Name one of his policies, just one.
And explain really well (you did after all elect this guy to be THE BIG BOSS" you better know his policies inside out or at least one of them).