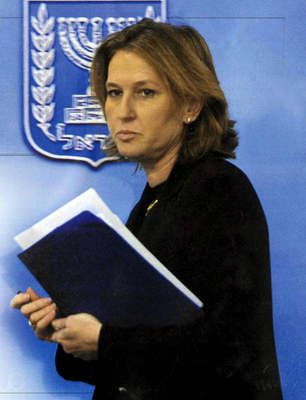 As Tzippi Livni sees her Kadima party dive in the polls and her political rival Bibi Netanyahu and the Likud party continue to rise, Livni has reverted to the classical Israeli Leftist smear tactic: Bash Religious Jews.

Today's polls show the Likud gaining to 34 seats, Kadima doing down to 28, and Labor crashing faster than the Dow Jones -- plummeting to 10 seats.

1. "The Likud is a party that knows how to say "no" to every topic, it [the Likud] cannot lead any plan in any field" (ynet in Hebrew)

Mrs. Livni: If that's so true, in a poll yesterday on IDF Galei Tzahal Radio, why do 78% of polled Israeli economists believe that Mr. Netanyahu is the best hope for Israel's economy, and not you? 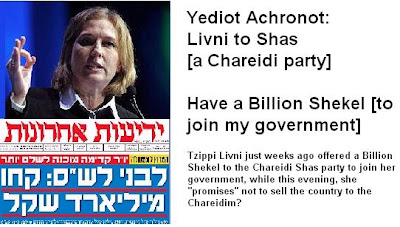 2. "Kadima will represent Israel and Kadima will decide on the religious identity of a Jewish Israel, without selling the country to the Chareidim."

Mrs. Livni: Kadima alone will determine the religious character of the country? You're sounding more and more like the Labor party every day. If anything, you're selling the country to the Palestinians. You lie outright that Jerusalem is not currently under negotiations, yet media reports from the Palestinians say otherwise.

3. "Israel is not a monopoly of rabbis" (ynetnews)

Mrs. Livni: And the Knesset is not a monopoly of Kadima.

In a party with convicted sex predators (Chaim Ramon), a Prime Minister under multiple criminal investigations, and multiple Ministers convicted and indicted for crimes in all directions, perhaps Tzippi Livni should simply shut and try to clean up her own house?

I agree with just about everything you say...but she is Ms. Livni (she is Mrs. Shpitzer).

Risa: Hmmm - thanks - will change it a bit later after cleaning the house for shabbat :)

Is that something you can use on shabbat?