There was a tragic bus accident this morning near Jerusalem -- a Palestinian school bus hit a truck, causing the bus to flip over and catch on fire. The Palestinian Red Crescent hasn't made up its mind yet about the number of casualties, but between 6-8 children were killed and dozens injured -- some seriously. 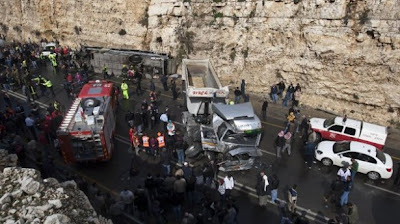 Yet immediately after the tragedy, the Palestinian Authority's Health Minister, Dr. Fathi Abu Morley called a press conference in Ramallah, blasting Israel for "not responding in time"

Israel rejected all claims of the Palestinian Minister of Health that Israel did not immediately attempt to save the children is this morning's bus accident north of Jerusalem. The Palestinian minister, Dr. Fathi Abu Morley, announced at a news conference in Ramallah that the accident was in the area controlled by Israel and that it was possible to intervene immediately to save lives. Magen David Adom noted that many teams were dispatched to the accident, immediately upon receiving the report. Israel's Deputy Health Minister Litzman stressed that the Israeli rescue assistance was immediate and without hesitation. Israel Channel B Radio

The Palestinian's lie is simply and absolutely disgusting.

As a first responder medic for both Magen David Adom and United Hatzalah emergency response medical services, I received a MDA emergency pager message at 9:13 AM this morning, that a school bus had flipped over and a mass casualty incident was declared. Moments later I received an SMS from United Hatzalah, calling on all emergency medical personnel in the area to respond. I switched to channel 1 on my United Hatzalah cellular radio, and heard dozens of first responders announcing they were on their way to the scene of the accident. No one even mentioned that it was a "Palestinian school bus" -- since that was completely irrelevant.

Yet the Palestinian Authority's Health Minister can't contain himself, and he has to lash out at Israel, as he lies and lies.

Coincidentally (or not), yet another symptomatic chronic Arab lie was debunked today.

The French Supreme Court on Wednesday acquitted an Israeli doctor accused of slandering a Palestinian man who claimed he was injured by the IDF during the second intifada.

The Palestinian man, Jamal al-Dura, and his 12-year-old son Muhammad, became the symbol of the Al-Aqsa Intifada, when the two were caught in a fire exchange in the Netzarim Junction. The boy was killed in the incident, triggering a blame game: The Palestinians accused Israel for Muhammad's death, while Israeli officials claimed he was hit by Palestinian fire.

The father, who survived the ordeal, relayed his version before the media, showing the scars that he incurred in the incident. The claim prompted Dr. Yehuda David of Tel Hashomer Hospital to reveal that the scars were actually a result of a surgery the father had performed years earlier, after al-Dura was attacked by Hamas operatives who suspected him of collaborating with Israel.

Al-Dura decided to sue David, and last year a Paris court ruled against the doctor due to the fact he released information from al-Dura's medical records. He was ordered to compensate al-Dura with €13,000, but decided to appeal the ruling at the French Supreme Court.

"It couldn't have turned out better," David told Ynet after the ruling was overturned. "It means that I spoke the truth, and the father just lied.

"We managed to deconstruct their false statements. All the scientific evidence that we collected for the past 12 years proves that the incident was staged and fake. They made up the father's injury, and the IDF troops never shot the boy."

Prime Minister Benjamin Netanyahu spoke to Dr. David on Wednesday and praised him for his determination. "You are an example for the battle for the State of Israel's truth and to sticking to the righteousness of our people's way," the prime minister told him. (ynetnews)

To understand more of why Palestinians and Arabs are chronic liars, I suggest you read yesterday's post, "An Arab like Me"...in which an Arab stands up, and has the guts to spell out the truth.

Not the Palestinian Narrative.

While all news reports mentioned that the accident occurred next to the 'settlement of Adam', nobody bothered to mention that it occurred on an apartheid road, where Israelis (ie, Jewish Israelis), are not allowed to drive.

And don't forget that the red cross would prefer that Magen David Adom not operate in that area.