Tu Bishvat (the 15th of Shvat), the holiday celebrating the fruit of Israel, has ancient Israeli roots, though we wouldn’t know about them if not for the Cairo Genizah.

The date itself is first mentioned in the Mishnah, as the “New Year of the Trees”. This “new year” was not a holiday; rather just a date for determining when the year starts for the purpose of tithing the fruits. 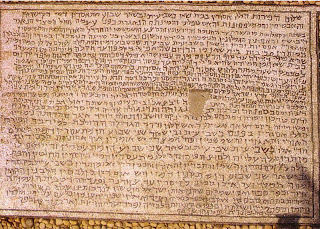 In those days the prayer service was flexible and the piyyut was added on to the basic prayer format. Two of the piyyuts found in the Genizah are Shmone Esre prayers, meant to substitute the regular texts during the chazzan’s repetition.

In the Israeli-Babylonian schism, the Jews of Ashkenaz continued the traditions of Israel, while the Sephardi Jews upheld the Babylonian tradition. Indeed, the tradition of celebrating Tu Bishvat as a holiday continued on in Ashkenaz. For example, one of the earliest Ashkenazi rabbis, Rabbeinu Gershom (early 11th century), wrote that the public may not fast on Tu Bishvat.

This tradition was accepted by the Sephardi community in 16th century Safed (Zfat), and codified by Rabbi Yosef Caro in the Shulchan Aruch.

Another Ashkenaz holiday tradition is described by Rabbi Issachar ben Mordecai ibn Susan, a 16th century Sephardi Jew who lived in Safed. He wrote that the local Ashkenazi Jews had a tradition of eating fruit on that day. This tradition was also mentioned in a European book of customs from that era.

This tradition was quickly adopted by the local Sephardi community as well. Rabbi Moses Galante, the Safed-born Chief Rabbi of Jerusalem in the 17th century, and other rabbis would celebrate the occasion with a ceremonial meal: eating fifteen different types of fruits, learning a Mishnaic passage over each, and by praying that this year will be a blessed one for both the children and fruit of the land. This tradition is described by his grandson, Rabbi Moses Hagiz.

This ceremony was popularized in the early 18th century, by the Kabbalistic work “Hemdat Yamim” [1]. "Hemdat Yamim" formulated a Tu Bishvat ‘Tikkun’ ceremony, which emphasized the reciting of numerous blessings and verses on a variety of fruit. This ceremony was based on the Kabbalistic writings of the students of Rabbi Isaac Luria, the ARI, on the spiritual categories of the different fruits, and that in turn was based on the ancient Israeli midrash.

This tradition later evolved into the ‘Tu Bishvat Seder’, which celebrates the fruit of the land and was accepted by Sephardi Jews worldwide.

The holiday further developed in the late 19th century: In 1890 Zev Yavetz, teacher and historian, proposed to make Tu Bishvat a national tree-planting holiday. The idea was widely accepted and is still practiced today all over Israel.


This article is based on Avraham Yaari’s article in Machanayim, vol 42, 1960.

[1] “Hemdat Yamim” was published in 1731 based on a manuscript from Safed. The author is unknown. There are various theories as to who it might have been, and which place him in the late 17th or early 18th century.

Most authorities agree that Hemdat Yamim was written by Nathan of Gaza, the big רשע who was the handler of the big רשע, Shabsai Tzvi, may he burn in hell...

The authorship of Hemdat Yamim is a topic of great dispute, and I can write a whole article just on that. In fact, books have been written on it.

The fact is that the Tu Bishvat Seder we celebrate today was formulated in this book.

Besides that, there is a strong Tu Bishvat-Shabbtai Zvi connection, but that's a whole other story.