The Shabbat Jerusalem got snowed in

In 1787, on the week of Parshat Beshalach, a major snow storm hit Jerusalem. Starting on the Wednesday of that week (Jan. 31 - 12th of Shevat), and for three whole days, it snowed and snowed. The snow piled up in the streets man-high, covering up the doors and preventing people from going out. The gates of the city, usually open during the day, remained shut.

Rabbi Moshe Yosef Mordechai Meyuchas, the Chief Rabbi of Jerusalem at the beginning of the 19th century, describes it as "something like we've never seen, and never been told by our fathers". 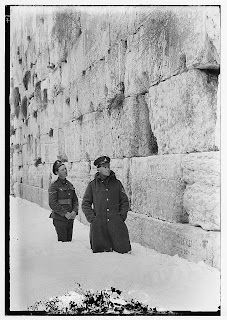 British soldiers next to the Western Wall, 1921

The snow was so heavy that the roof of the Istanbuli Synagogue collapsed. The Ottoman authorities did not allow the Jews to rebuild the roof, and it was only in 1835, under the rule of Muhammad Ali Pasha, that the synagogue was repaired.

Come Shabbat (Tu Bishvat) the Jews were faced with a problem. The synagogues were low, impossible to access, and remained closed. Will they have to go a Shabbat without reading the Torah?

Luckily, there was one building which was high and accessible: the Kabbalist Bet El Synagogue (Yeshivat haMekubalim). Rabbi Yom Tov Elgazi, the Chief Rabbi of Jerusalem and head of the Bet El Yeshiva, managed to get together 2-3 minyans and read the Torah.

Rabbi Meyuchas says that he himself lived far from the 'street of the Jews'. He had a Torah scroll at home, but could only get together eight men, not enough for a minyan. They had to pray the morning Shabbat prayers without reading the Torah. They then sat down together for the Shabbat morning meal.

However, later in the day, sometime around noon, Rabbi Meyuchas got a heaven-sent gift: two golden Torah ornaments. He used the ornaments to complete the minyan, and the group read the Torah.

[This post is based on the story as told by Rabbi Moshe Yosef Mordechai Meyuchas in his book "Brachot Mayim". For those interested in the Halachik aspects, Rabbi Meyuchas discusses his reasoning in the book. The story of the snow storm was copied in easier-to-read Hebrew by Rabbi Avner Afgin in his book "Divrei Shalom".]

Better luck next time with the snow...

Back to trying to figure out how to survive Israel's draconian economics...It's no secret that Israelis seem to often pay more for food than Americans. But what about when the product is an Israeli product, produced in Israel, and shipped to the USA? Does it make sense that Americans can buy the same product shipped across the world for less than half the price?

Well, whether or not it makes sense, that's the case. Here is the typical price for Strauss chocolate bars in Israel vs. US.

In response to this Shanda, Strauss's stock dropped 3.6% yesterday, and there are calls for a boycott. I for one will be giving out fruit for this year's Mishloach Manot.