This past shabbat, parashat Chayei Sara, marks the annual "Shabbat Hevron", in which tens of thousands of Jews visited the biblical cave of "Machpela", which Avraham purchased from Ephron the Hitite. Visitors stayed in the city of Hevron and in the adjoining city of Kiriat Arba, prayed in the landmark cave, and toured the Jewish neighborhoods in Hevron.

In a rare glimpse of solidarity between Hebron's Arabs and Jews, Hebron's Arab population asked for help from the city's Jewish residents in ridding the city of the radical anarchist leftists from the International Solidarity Movement. Several local Arab residents told the Kol Ha’Ir newspaper that the ISM activists have been exposing the local youths to drug use and sexual promiscuity. 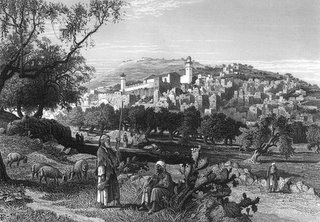 One has to wonder what in the world the midrash was thinking, when it wrote, that there are 3 locations which the world can not say were stolen by the Jewish people, because each site was purchased outright for hard cash.

Mearat HaMachpela in Hevron was purchased by Avraham

The field containing Kever Yosef in Shechem was purchased by Yaakov

The Makom Hamikdash in Yerushalayim was purchased by King David. 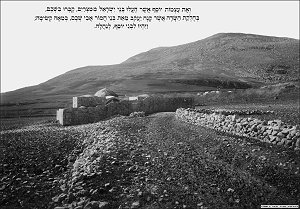 This picture of Kever Yosef in Shechem, taken around the time of WWI by a British soldier is more interesting in what's missing, than what you see. Note the almost total absence of Arab homes. If you want to see pictures of what the area currently looks like, you can see many pictures on the Kumah website.

For before and after photos of Shechem (from various angles) take a look at:

how do you do it-unbelievable pictures-and of course the truth.

Daat Y: I love the black and white picture of Kever Yosef from the early 1900's -- we have it up in our sukka, so I knew it existed.

We're big fans of Baruch Nachshon, and we have many of his lithographs hanging on our walls.

The last time I was zocheh to be at Kever Yosef was the first night of slichot, 5 years ago, right before the "war" started. It was 4 days before Kever Yosef was ransacked and destroyed on motzei Rosh Hashana.

I've tried going numerous times, but the army keesp cancelling the incursions to visit, because of terrorist threats. Maybe next month.