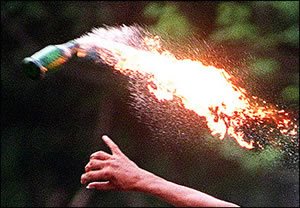 Yesterday was a very busy day. First I attended the brit of a neighbor's newborn son. The young family lives on a nearby hilltop in a caravan overlooking the entire coastal plain of Israel, from the power station smokestacks of Hadera to Ashdod. A bit later, there was a funeral for an elderly woman who had lived in our community for the past 17 years. Needless to say, I was in a bit of a rush as I took off for work in Jerusalem at 12:20 PM.

Driving down the road, I was speaking on my mobile phone to a co-worker, when I suddenly said, "Hey that looks like a Baktab" (molotov cocktail/firebomb) . I hung up and saw another one landing about 4 feet my van as I tried veering to the right. The car in front of me was also narrowly missed, and started pulling over to the side of the road. I pulled up alongside them and motioned for them to keep driving, since were there are 3 baktabim, there might be more. I called them up to see if they were OK (which thankfully they were) and then I called the regional IDF command center.
Surprisingly, I was called back almost immediately by 2 different senior officers asking if I was 1. OK, 2. Any damage, 3. Exact location...and they said they would get right on it. Even more shocking was the phone call I received in the late afternoon from one of the officers that they tracked the suspects to a house, and arrested the terrorists! I won't go into more details, but they know for a fact that these 2 terrorists were the same ones who threw the firebombs at my van.
Almost every hour of the day, my MDA beeper goes off telling me where to go to help accident/terror victims, or just regular people needing Emergency Medical care...and it a blink of an eye, I've seen families' lives changed forever. People who get up in the morning to go to work for a regular day, kids going off to school, and then in a heartbeat, everything changes. Hospitals, funerals, excrutiatingly painful rehabilitations, family "reorganizations". I was very fortunate to avoid injury yesterday, in fact, I was lucky that NOTHING happened to me at all.

When one escapes injury (or serious injury) one is supposed to bring a Korban Todah - a sacrifice of thanks to G-d. Today, since we don't yet have the Beit HaMikdash, the Jewish Temple to bring sacrifices, one announces a special bracha, "HaGomel LeChayavim Tovot".
I hope to be in shul tomorrow morning to do just that, and Thank G-d for not turning my life, and that of my family upside down in a heartbeat.

I guess G-d has more plans for me.
Thanks.
Posted by Jameel @ The Muqata

Glad that you're ok.

The terrorists will get a slap on the wrist.

Baruch Hashem! I am glad you ar ok.

I heard they blew at least one of the terrorist's legs off, when they attacked the army.

Any truth to that rumor?

I benched Gomel today at the early minyan.

ahh firebombs are scary stuff... i was in cars hit by them between ofra and shilo... but bullets are freaky! i get a tremp we are driving between ofra and tzomat bet el when car gets coverd in bullets. driver hits the pedal is going 175 kph... i said shema and closed my eyes... guy next to me has hand gun out loaded and is firing out the window at g-d knows what... ahh the wild west bank!!

I am glad you weren't hurt.

Stay safe and continue to keep your eyes open.

I just don't understand why so many Jews continue to support Kahanist terrorism, assassinations of Israeli leaders, etc. and expect results that are different from the ones you are getting from all (especially since it's been over, uh, fifteen years now)....

If you pick a Jewish Taliban, why select from the band that never shoots straight??

I could NEVER support this mentality....better we should pull out of Palestinians areas entirely...

That's why I say that I travel "double siyata d'shmaya." One to get on the road (tremp) and the other to safely go.