As Thanksgiving Ebbs Away

I didn't eat Turkey this year, since we went to a wedding. Actually, we didn't eat Turkey last year either; guess we just grew out of it...too much craziness to bother...I guess.
A 57 year old Muslim woman blew herself up this evening near IDF soldiers in Northern Gaza. Thankfully, 3 IDF soldiers were only lightly wounded as the Palestinian terrorist blew herself to bits. 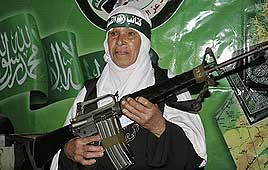 Picture of the ethical 57 year old Palestinian terrorist
While we have much to be thankful for, the people have Sederot are still getting shelled daily by Palestinians, and the Israeli government is too scared to act.

The families of kidnapped IDF soldiers aren't too happy either...and the Baumel family is convinced their son is still alive after they received new information about the fate of their son, IDF soldier Zecharia Baumel who was kidnapped 23 years ago.

A lot to think about, as Thanksgiving ebbs away.

Shabbat Shalom to all our readers...

Jameel-
I thank you from all my heart for posting (the link) about Zecharia Baumel.
I am so sad.
But it gives me hope.

Also, thank you for posting about Dudu Hadad's Bar Mitzvah.
Again, I am sad but it gives me hope.

May we only hear good news.

"the Israeli government is too scared to act. "

not fair - you know the whole story - this kind of rhetoric does nobody good.

and you have to go back 23 years - boy are you depressed. get to a therapist.

thanksgiving is a time of family and good will. sure the world is harsh. but take a breather.

what an evil woman, it's worse when they're female.I don't why but it just is.

i know why. because women are born with more sensitivity and compassion than men are.

Hmmm, she seems to have saved her kids the bother...

I hope she rots.

She probably did it to get her photo plastered all over GAZA. There is quite alot of motivation to be a POSTER WOMAN.

I also went to a wedding yesterday, but I was yotzei with my turkey and cranberry sauce, because they had at the carving station at the smorgasboard. :)

You know, my grandmother taught me to read, took me shopping, bought us kids candy, etc...I guess she just wasn't as socially aware as terrorist-granny.