Why is Olmert under the OU's Kashrut Supervision? 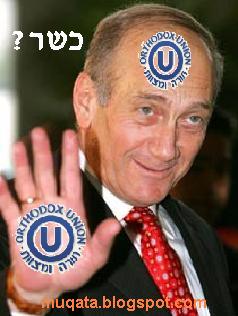 Arutz-7 has the following story:

(IsraelNN.com) Protesters, including religious Jewish immigrants from North America who were evicted from their homes during the Disengagement and wounded by police brutality at Amona, will protest the Orthodox Union'’s decision to honor Prime Minister Ehud Olmert at their annual convention in Jerusalem.

A protest rally under the banner "Hey OU - Olmert isn't kosher" will take place outside the convention. "I find it hard to comprehend why a Torah organization would want to invite a person who has practically declared war on the National Religious camp in Israel," protester Steve Schwartz wrote to the organization. "“Your organization's actions are a slap in the face to your fellow religious Jews in Israel."”

The protest will take place at 6 p.m. on Wednesday outside Jerusalem'’s Renaissance Hotel during the time Olmert is scheduled to address members of the large Orthodox organization. For information call 052 842-1203

The Orthodox Union is making a big mistake to honor Olmert. While Olmert is the Prime Minister of Israel, I think it's the wrong place and time for the OU to honor him. Olmert's currently under investigation for all sorts of criminal charges, the war this past summer was lost, Sederot is under constant attack, the Gush Katif people still have NO real solutions for housing or jobs, and don't forget his infamous directive for police brutality against teenagers at Amona -- I simply don't understand what the OU has to gain by honoring the man.

It's not like Olmert's now Mister Popularity in Israel. If the OU wants to honor someone who has done positive things for Israelis (like housing Israeli refugees from the North during the summer's war when the government did nothing, for example), maybe they should honor Arkady Gaydamak...I'm sure he would be pleased to give a large donation as well.

Oops, the OU is at it again. Once again they certified an unfit item as Kosher, this time its Israel’s Prime Minister Ehud Olmert.


To let the OU know how you feel about this latest Kashrut fiasco you can contact them at the eMail addresses and phone numbers below.

I know of people who will be out there demonstrating.

Hard to believe he tried to pull off such a stunt...
someone should send this to Yoav Yitzchak

My mother-in-law plans to walk out if he gets up to speak.

I will be there to PROTEST.
What a shanda.

when you are right...you're right...what the **** are they thinking? maybe they should honour him for wearing nice suits...that he does good...stay safe

sorry - my mistake. I saw the topic and asusmed it was the same issue. Check out the sin of the expulsion blog at http://www.sefer-torah.com/blog/2006/11/22/ou-source-pm-office-tries-to-shakedown-ou-for-additional-security-costs-for-olmert-speech/ to see Olmert's latest thuggery...

The OU phones are busy, but you Fax the Convention directly. The hotel confirmed that they'll deliver faxes to the OU convention.


Be sure to have a cover sheet saying that it's for the OU convention.

That's rather bizarre. I hate it when organizations heap awards onto political leaders just because they are the guy in office at the time. It stinks of pay-to-play politics.

Also, did you notice what they titled the convention? "Hear It Like It Is. Tell Us How It Should Be." Very orwellian.

The seminar topics are also quite funny when read in the context of the OU honoring Olmert. The Security Challenge? Is There a Religious Revival? Jewish Values and the Proposed Constitution? Ha!

I can't say I'm surprised. This is not the first time the OU has certified someone who's treif as kosher.

While the OU is trying to remain politically neutral by inviting Smolmert to speak, their brothers at Young Israel showed courage by openly supporting the orange movment against expulsions.

Protest is a must.
The Jewish Nation has acted with passivity for too long. I sent a fax and emailed, wish i could have been outside the hotel protesting with the jews who have a soul.

Well, we could boycott the OU products, but doubt that we would make more than a wimpering dent. However, a letter or fax to that effect from many people might raise a few eyebrows.

Believe me, any Jewish organization that gets too B I G, ends up destroying itself from arrogance.

I believe the situation of Kashrus in America is on shaky grounds anyway, because the drive to profit and 'make everything kosher' has its own built-in obsolescence.

It might be interesting to know who is the man behind the selection of Olmert, and the reason for the payoff.

Well, we can always boycott "Torah Tidbits," as some have suggested. That'll show them!