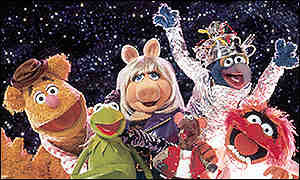 Heh...just had a flashback to "muppets in space" from the 70s.

Check this out -- NASA is sending the Dawn spacecraft into the asteroid belt, and if you register by the 4rth of Novermber, your name can be sent into space with it!

This way, when aliens find the spaceship, they will have a definitive list of whom to eat when they follow the spaceship's trail back to Earth. You won't have to look for them -- they'll come right to your doorstep! (And if you act now, you get a cool looking certificate, suitable for framing, like the one I just got...) 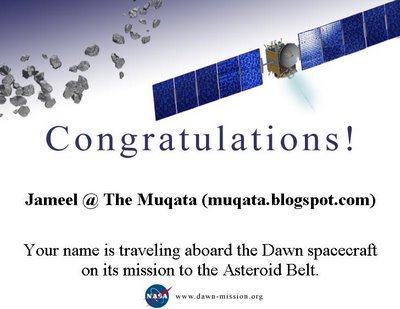 Submitted names will be carried on board NASA's Dawn, the first spacecraft to travel between and scrutinize two distinct worlds. Mission scientists are confident Dawn observations of asteroid Vesta and dwarf planet Ceres will answer basic questions about the nature and composition of these celestial wanderers.

"How many chances do you get to fly into the very heart of the asteroid belt?" said Keyur Patel, Dawn project manager at NASA's Jet Propulsion Laboratory, Pasadena, Calif. "When the craft is launched in June 2007, yours and the names of your loved ones can hitch along for the ride and be part of space exploration history."

Dawn will carry a silicon chip containing the names of asteroid, space and other enthusiasts from around the world. People may submit their names for this historic one-way mission by visiting JPL's Dawn Web site now through Nov. 4 at http://dawn.jpl.nasa.gov . More than 170,000 people have already signed up for the asteroid belt tour.

Following launch, Dawn will employ an ion engine to propel it during its more than four year, 3-billion-kilometer journey (1.9-billion miles) to its first target – asteroid Vesta. After months of detailed scientific observation of Vesta, Dawn's ion engine will fire up again, and send it on its way for a 2014 rendezvous with Ceres, recently anointed a "dwarf planet" by the International Astronomical Union.

"This campaign will allow people from around the world to become directly involved with Dawn, and through that, become familiar with the mission's science," said University of California Los Angeles professor Dr. Chris Russell, Dawn's principal investigator.

So why not send your name, or your blog into space for posterity?

Worst case, they'll have you for dinner.

Or in my case, they'll tear apart Ramalla looking for someone named Jameel.

Just for the record Jameel, it isn't Muppets in Space... it's...

I just got the DVD set of the first complete season of the Muppet show. Which was probably the best show on television in the history of the medium. The Honeymooners is a close second of course. Oh, and Gilligan's Island...

So cool - thanks! If I can't go into space myself, at least my name should make it there.

Must Gum: Oh man - I'm definitely losing my memory if I could have forgotten that!

(Though there was movie "Muppets FROM Space")

Also - If I would have written a post called "Pigs in Space", I would have been denounced for inflamatory stuff on my blog.

Must Gum: Oh man - I'm definitely losing my memory if I could have forgotten that!

(Though there was movie "Muppets FROM Space")

Also - If I would have written a post called "Pigs in Space", I would have been denounced for inflamatory stuff on my blog.

"How many chances do you get to fly into the very heart of the asteroid belt?"

Today's Show and Tell
My daughter has got a mighty good show and tell!

How much did you pay for this?

I LOVED the Muppets when I was a kid!!

Bagel B: My pleasure!

I have the DVD set too. It is pretty cool.

You're having way too much fun with this! I can only imagine what goes on erev Shabbos at your house...must be awesome! Can't wait to find out for myself!

I'm not sure why this is so cool, but it is! I'll be doing this as soon as I get home.

I know who I'd like to send into space!

Hi, i was looking over your blog and didn't
quite find what I was looking for. I'm looking for
different ways to earn money... I did find this though...
a place where you can make some nice extra cash secret shopping.
I made over $900 last month having fun!
make extra money

lol that is cool!
just to have the certificate even... would look good on your resume :P

exterior vinyl window shutters, contractors and manufactures of all shapes and sizes of shutters. From New York to Los Angelos we will help you find shutters for your home. Give your windows Old World appeal with Standard Double Panel Vinyl Shutters. Each shutter has a charming segmented design featuring two raised panels. Some double panel shutters are molded with precision in vinyl, a material that will bring you years of use and easy maintenance. These Custom window shutters are available in standard sizes and beautiful colors to enhance your home. http://nyshutters.rgcont.com/

Forget about space, I have enough trouble getting from Shiloh to Beit El, and now they're changing the bus schedule!
http://me-ander.blogspot.com/2006/11/public-be-damned.html

Glad to see that now only can you get the news you need about muppets, but shutters too.

and i thought i was already in space....

My Daughter did her "show and Tell' presentation today Muqata, her peers were very impressed with the printed certificate.

They thought her Dad must be an Astronaut or something, until My daughter replied, no NASA is in the US dad just got it of the internet.

Just stopped by to say hello. I cam ehere regularly when Israel was at war with Lebanon. I do think of the soldiers that were kidnapped and what they must be goig through. It breaks my heart to think of it.
Have you seen the documentary 'OBCESSION' ? That jerk in Lebanon is in it. Saddam was found Guilty and I hope will soon be done away with and will just be a part of history. Now if all the others like him could be rounded up and done away with.
I worry about all of you in Israel all the time. So many nasty things are said. In reality thay all want to wipe Israel off them map. This is fact. I prsy it never happens and never comes even close. It's just a worrisome thing.
Meanwhile, here in the states we will be going to the polls for what is called mid term elections. Boy has it been the nastiest of all elections in my memory. So much mud slinging and slanderous statements. It has been really disgusting. I will be voting with the conservatives as always.
My president will always be my president. Politics is so so ugly. I hope the strife in your country is not as bad as it is here. God bless Israel and God bless America.
Take care all til next time.

Is flying through an asteroid belt anything like living in Sderot under Olmert?

Cyrano: No, I think flying through the asteroid belt is safer.

anonymous 12:32 - thanks for stopping by. The politics in Israel are just as bad as in America. The difference, it's OURS...(hmm, don't know if that's a plus or a minus).

Bagel: Glad I could help :)

Bec: Ah...so you're making aliya from space? Bring us back a space rock or something.

NASA is so last century. You should pay up some real cash and get your stuff sent into space in one of Bigelow's inflatable space stations!