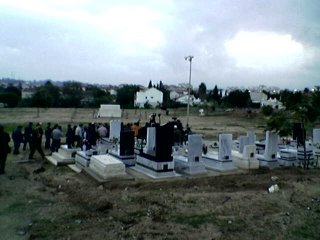 It had been a few months since I'd driven though Sederot. I remember the last time; I was driving to a wedding in Ofakim, and driving through Sederot made me wonder what would happen if just then, the "Tzeva Adom" (Color Red) incoming-Qassam-rocket warning system started to blare. I opened my car window, so if I heard it, I would have 15 seconds to park and find shelter.

Yesterday, I returned to Sederot for the funeral of a friend's mother, killed by a Palestinian Qassam rocket.

The Sederot cemetery is small, with black and white tombstones marking the graves; some are flat and simple, some have headstones, and the important or saintly people buried there have structures erected over their tombstones providing shelter from rain and sun (for those who come to visit them?)

There's also an area for for eulogies adjacent to the cemetery, a simple building of 4 pillars and a ceiling --there's only one wall, and it faces the rooms where they prepare bodies for burial. To the West is a hill from where the rockets fly over -- from the Gazan town of Beit Hanoun.

There was a large police presence. Arab MK Muhamad Barake arrived for a photo-op, complete with over 10 Yasam special-ops policemen who surrounded him, suspicious eyes darting in all directions, short M16's pointed outwards, ready to be fired. The undercover agents intercepted someone with a kippa and a beard walking in Barake's direction and hauled him off.

Sederot's mayor, Eli Moyal spoke. He said he didn't know the woman killed, but that her memory would be taught in the schools as part of the legacy of Sederot. He also said that the Palestinians should just leave Sederot alone, and that he wasn't going to call for revenge, just for the IDF to keep Sederot safe. Some MK who I'd never heard of before also spoke, and didn't say anything meaningful either. No one really spoke about the woman killed...who she was...where she was from (a new immigrant)...her family (she leaves behind a husband, a son and a daughter)...and the speakers finished within 15 minutes.

The procession started moving in the direction of the freshly dug, open grave...about a 2 minute walk. Just as the actual burial was about to begin, Eli Moyal called out in a loud voice, "Friends, 5 Qassam rockets have just been launched, everyone please take shelter", motioning towards the covered area where we heard the eulogies. Just as people started to move, an IDF officer announced, "It's OK, they're [the rockets] are headed northwards, to Ashkelon..."

Everyone refocused their attention to the burial, and the booms came. One after the other, we heard the rockets land. I noticed a large tethered white blimp to the south, high in the sky, which is probably one of the methods the IDF uses to identify Qassam launches. It's definitely not Goodyear advertising...

The burial went quickly; the mourning husband fainted but quickly came to. There was a doctor there, so I didn't do anything EMT related...someone called MDA and they showed up with 2 ambulances. They did a quick evaluation of the man, and decided to take him for further treatment.

I put my hand on my friend's shoulder, to let him know I was there. He nodded, and walked off with arm around his sister.

The crowd dissipated and we drove off.

I post this in memory of Faina Sloutsker. Unfortunately, she was hardly spoken about at her funeral. Faina, 57 and her husband Michael immigrated to Israel in 2003 to join their daughter and her husband who made aliyah before them and were already living in Sderot. They have a son, daughter-in-law and grandchild living in Jerusalem.

Today, Herziliya lsraelis, far away from Sederot published obituaries in Haaretz of Gazan Palestinians killed by errant IDF missiles, "out of shame of what Israel is doing."

All I wrote was this, and not more about Mrs. Sloutsker. May her memory be a blessing. 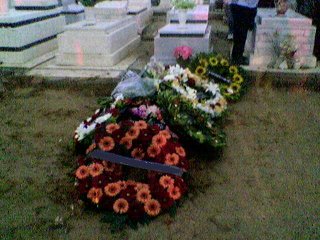 very touching. Thank you for sharing.

I was shocked to see Noam Shalit go share sympathies with the fallen of Beit Hanoun, yet no word from him about Sderot..

Well said. My impressions were basically the same as yours... nothing much to add.

very touching
you did well

i am with towik.
you are aware, of course, that she was not jewish (unless she converted) but was an arab?

Actually, she wasn't Jewish (not an Arab though).

She was eligible for aliya to Israel as part of a Jewish family.

Thank you for sharing this. May her memory be for a blessing.

actualy she was a moslem from the caucas

Jameel, is there a website that updates daily on Qassam attacks and fatalities?

If it wasn't for your blog, I would know nothing about this sort of thing.

Who cares if she was a Muslim or Jew in this case? She was a human being and was murdered, for no reason, indiscriminately. And it's appalling that no one seemed to really care, outside of her, one presumes, her family. ..and Jameel.

Thank you for posting about this.

I feel sorrow for this woman..and while I can feel sorrow for those killed in Gaza, maybe I feel a bit less. They are human beings also, but they didn't have to die...if their 'people' chose to stop trying to do what they did to Mrs. Sloutsker.

how much more of this will we stand for before we do something about the bombings?
thanks for putting this post up,it's good to see someone doing something....

Thanks for bringing this tragedy to our attention.
Aaron
Visit: Bagelblogger

if someone has a venomous snake in his house,and does not cage it,and it goes out and kills people,who do you blame? do you blame the snake or his owner
ladies and gentelman,the murderers of this poor innocent woman is not the palestinian snake,because a snake does what it doed it cant help itself
it is our own government led by this leftist swine olmert yamach shmo ,get rid of him before we lose our beloved country

pEcuTt The best blog you have!