What I'm not blogging about today..

This poster's all over Jerusalem... 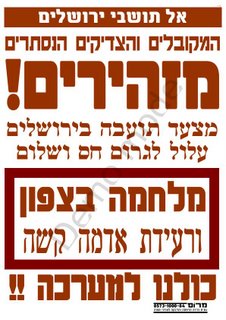 Translation: To the people of Jerusalem, The Mekubalim (mystics) and Hidden Holy people WARN: The Abomination Parade in Jerusalem may cause: A War in the North and a Bad Earthquake. Everyone to Battle!

2. President Katzav's mounting legal woes of the rape, harrasment, abuse of power, etc. charges about to be brought against him.

3. Rabin Memorial , , month, his legacy, and the continuing surrounding questions of his murder. Videos...

4. The upcoming war in Gaza....any day now, the IDF is going to start a very large scale operation in Gaza.

5. Worth blogging about, but no time today: The war in Lebanon is over, but where are our 3 kidnapped soldiers? We should think about them daily.

6. The Disengagement is over, but the Jews from Gush Katif have no real permanent housing solutions, most don't have employment, and the government wishes they would disappear. We should think about them daily.

7. Why are the Qassam rockets still falling daily on Southern Israel from Gaza? Sederot is terrorized daily. Men, Women and Children...every day have to deal with the very real threat of rockets landing on their homes, cars and schools. We should think about them daily.

8. Regarding my post about the Jewish Olive Tree Killers from yesterday...YNET is still trying to find one to pin all the blame on. Isn't it nice that they put the article under the category, "global terror"?

And that's my roundup of things I'm not going to blog about today.
Wherever I am, my blog turns towards Eretz Yisrael
Posted by Jameel @ The Muqata

They should have it somewhere else and leave Jerusalem alone. Just like the activists want respect, they should respect others too

If these Holy People are hidden, who's speaking to them and getting this warning? How do we know they're Holy? Why can't they just hang a poster saying that the parade is disrespectful and wrong? Why do they have to hang a poster warning that holding such a parade will cause calamities??? What's with the added fear factor? If these people they're aiming at are "real G-d fearing people", they don't need the extra "DIRE WARNING" to get them moving. I could see the very same poster hanging in Alabaman somewhere, by those Baptists that pray with snakes. Give me a break.
-OC

Clever way to 'not' blog about 8 things at once!

Now how about a post concerning the relative merits of different door materials? :)

I am not telling you what I am not blogging about. No way.

To the people of Jerusalem, The Mekubalim (mystics) and Hidden Holy people WARN: The Abomination Parade in Jerusalem may cause: A War in the North and a Bad Earthquake. Everyone to Battle!


A War in the North and a Bad Earthquake are going to happen anyway.

To the people of Jerusalem, The Mekubalim (mystics) and Hidden Holy people WARN: The Abomination Parade in Jerusalem may cause: A War in the North and a Bad Earthquake. Everyone to Battle!


A War in the North and a Bad Earthquake are going to happen anyway.

that's quite a lot of not-blogging!

For the first and probably last time- I agree with Joe Settler.

- The Jerusalem Report did a big article about the upcoming earthquake about a year ago: Anytime now, geologically speaking, we'll all (read, the entire region, us and all our friendly neighbours) be swallowed up by Mother Earth.

pp:
For the first
Well there's a good start

aww, you blew it already.

Funny how they all forgot the Tsunami that was going to drown Gaza.

We have a united and highly vocal reaction from the right wing rabbis vilifying the acts of consenting adults. Clearly, this is their right. Whether I agree with their politics or not, I do respect their right to responsibly express their views; indeed, even to make utter fools of themselves. However, what irks me beyond my point of tolerance is the juxtaposition of this to their absolute silence in response of the outcry of broken souls who are being molested by their rabbeim in yeshivas. Rabbi Yehudah Kolko and Rabbi Lipa Margulies go about their business with the tacit approval of this same band of rabbis who see fit to attack a group of consenting adults. We are living in a modern day Sodom; and it is not the small minority of practicing “Sodomites” who are the problem but rather the rabbis who are practicing Sodomite Justice. Shame on them.

Hey very interesting site. I am looking for Spy Software since kids use my pc. If you know of any worth trying just let me know. Thanks