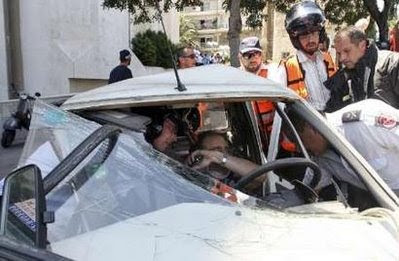 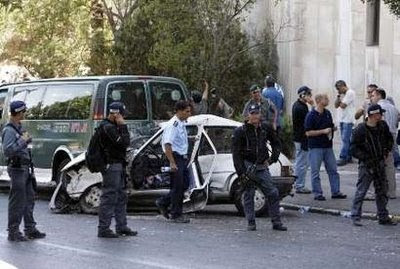 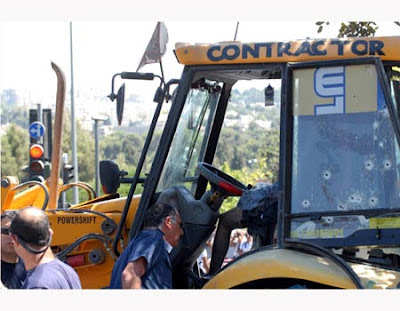 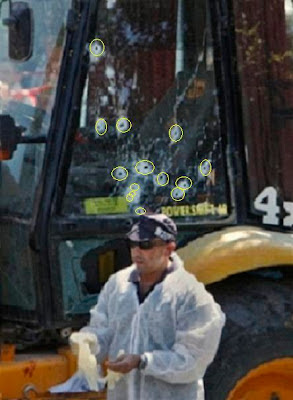 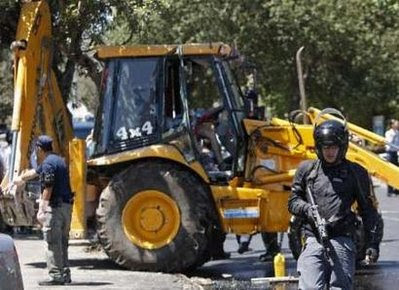 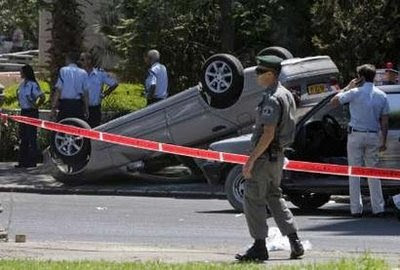 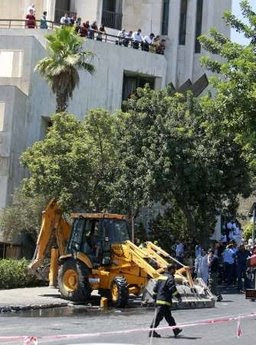 3:02 PM Update: The heroic civilian who stopped the terrorist is Yakki Asa'el, aged 53, father of 8, grandfather of 6. A teacher and farmer by profession. IDF Company Commander (מפקד פלוגה) in the reserves. Settler from Susya (Har Hevron Hills area).

The copycat attack occurred on the corner of Keren Hayesdod and King David streets in dowtown Jerusalem, down the road from the hotel where U.S. Democratic presidential hopeful Barack Obama was to be staying later in the day.

"A civilian who saw what was happening, shot him. The bulldozer continued on its way. A Border Police patrol... continued to shoot and the terrorist was killed," the spokesman said. "Another person was wounded."

An eyewitness said that the whole incident took place in less than a few minutes.

"[The driver] tried to lower the blade of the bulldozer onto the head of a pedestrian, but missed her by an inch. At first I thought it was an accident, but then he kept going in a zig zag down the slope of King David, overturned a car and hit a few cars. The whole thing happened very quickly.

"One car flipped over and others were crushed. I started running in the direction of the tractor. People regained their composure within seconds. A guy from Susya, near southern Mount Hebron, shot him in the head and a few minutes later a Border Police officer shot him as well," the witness added.

Update: Once again, civilians keep the streets of Jerusalem safer. The responsible person for shooting and killing the terrorist was a civilian. A Border policeman apparently also took part. There are 5 wounded, 2 of them in serious condition and one of the wounded is an infant. 2 cars and a bus were damaged by the tractor. The attack took place near the King David hotel.

I didn't go out for the call because it wasn't declared as an MCE (Mass Casualty Event -- אר"ן אירוע רב נפגעים) though the exact same circumstances led the event. (Friend called, said he heard increased chatter on the MDA/Hatzala radio system, and then I found a colleague in the next room who is a first responder for MDA in Jerusalem...)

A refuah shelaima to the wounded.

Attempting to repeat their success in the last tractor attack, a terrorist has driven a tractor in a rampage in Jerusalem. As of this time, the terrorist has been killed and there are a few wounded on the scene being treated by MDA and Hatazala medical EMT volunteers.

Take a look at these headlines:

The BBC's headline is a perhaps slight improvement over the headline they used for the first tractor attack 3 weeks ago: Israel bulldozer driver shot dead

I included the links, but note that the headline text may change.

anonymous: now that comment can be taken in many ways.

Who are "you people"?

What "needs to be done"?

What is "regards to Obama?"

I would to think you're implying we need to keep him safe and protected.

i see at least one armed soldier at the beginning of the clip keeping his distance. why?

loz: Obviously a Tirun, he didn't even know how to cock his rifle.

why would they give him a deadly weapon to carry in public if he is not qualified to use it?

Lurker, you know, I actually laughed at the headlines the BBC gave them, but serisouly, the more appropriate reaction is its opposite...