Is the Red-Dead a Dead-End?

One of the ideas touted out by those searching for Peace in our Time is the Red-Dead plan.

The idea is to redirect part of the water from the Red Sea to the Dead Sea via a water canal or pipe. 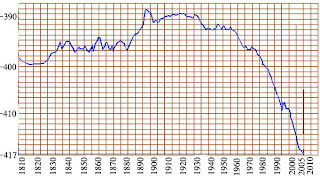 Of course this plan has some major drawbacks, and let's discuss them (from last to first).

While true it would (probably) refill the Dead Sea, at first glance there is a much higher chance of regional ecological/environmental damage (assuming you want to keep the ecology the same as it is today) from water coming from the Red Sea than if you instead brought in the water from the Mediterranean.

But of course if the water is filtered and desalinated in both cases, than that won't matter and the damage is unlikely, so that is a moot argument.

(Where do they dump the brine?)

And of course there is the real estate issue, that this will turn the Red-Dead Canal into a hotel and real estate zone. It will bring development into the region.

Personally I'm not against that, and that wouldn't happen with a Med-Dead Canal.

But only if you are one of those anti-development environmentalists can this be seen as a bad thing. So that argument in moot in my book too.

Of course, on whose side of the canal would the hotels and real estate development be? Would Israel get any development from it?

If you look at the map, the entire canal is deep within Jordanian territory, there is no real estate advantages to Israel that I can see. (Will Jordan change their law and allow Yitzchak Tshuva, a Jew, to own land in Jordan?) 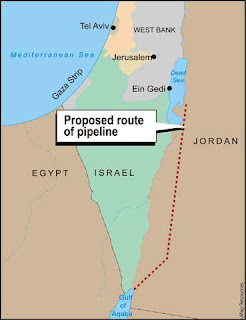 In terms of hydroelectric energy and desalination, both plans should have a benefit, but I suspect that generating electricity from a 1250 foot elevation drop-off from the closer Mediterranean (80 kilometer) would be much cheaper than the 200 kilometer trip from the Red Sea.

In terms of net electrical production, the Med-Dead would produce more electricity and cheaper (remember desalination and transport costs) than the Red-Dead.

In terms of desalinated water, if Israel is to get any of it, it is much easier (closer) and cheaper to get it transported to our water system from the Med than from the Red, where it would have to be transported back up the incline to Jerusalem and central Israel.

In short, in terms of net energy generation, and water for Israel, the Red-Dead makes absolutely no sense at all, while the Med-Dead makes all the sense.

But now last but not least is the Peace factor.

There are two groups pushing this, the developers and the True Believers.

The idea for this post came up because there is concern that Egypt may scuttle their natural gas sales to Israel.

And if you look at it, there are almost no real (large-scale) joint projects between Israel and it's neighbors with who we have peace treaties (well, we already unilaterally supply a tremendous amount of water to Jordan).

And the projects we do have are always under threat of Arab withdrawal and boycott.

Do we really need yet another project dependent on their good will and political dispositions when we can do this independently, create self-sufficiency, and not be constantly under threat? (Unless that is the goal of the True Believers).

Have any of those other projects brought or helped maintain peace? I'm hard-pressed to say yes (besides US military aid to Egypt, which has its own major set of problems).

In terms of developers, I am sure they will make tremendous amounts of money, just like the Jericho casino did until the PA decided that murder was more important than money.

But regardless, the developers will continue to push this, using "peace" as the emotional motivator (and to get UN and other donor countries money to build it and their expense), though everyone involved knows ultimately its just about the dollars.

In terms of the True Believers, I suspect it is only Peres and Co. that are pushing for it for that reason.

After all, there are no real benefits to Israel that couldn't be had more cheaply, quickly, and profitably by a Med-Dead Canal instead.

In fact, (besides elevating the Dead Sea) in terms of water and electricity there is no benefit to Israel at all - except for "Peace", and we already have a shaky, useless peace treaty with Jordan - this project won't strengthen that.

Personally, I'm not even sure how this project will bring peace as after all, as it all occurs in Arab territory.

In fact, I don't think Israel is even needed to make it happen. Would it relieve long-term water issues for Jordan? For sure, but again, they don't need Israel for that.

So where's the peace dividend?

And finally, as I'm writing this I realize that the Red-Med may actually be counterproductive to Peace.

One idea touted is that there will be a war in the future due to lack of water resources in the region, and this will resolve that pressure.

But at the moment, Israel supplies Jordan with a tremendous amount of water.

Imagine if we no longer had to. Would Jordan continue to need to be semi-cordial with us now that they no longer need us? Or would they revert back to their natural state of undisguised enmity?

If Israel were to build the Med-Dead plan (or the less practical Med-Kinneret plan), and then used that system to sell even more (needed) water to the Jordanians - wouldn't that make much more sense and peace more likely by simply requiring them to continue to be peaceful (nonbelligerent) to us for their own continued benefit, whether they liked it or not?

There would even still be cooperation, but this time Israel benefits too, for real.