Location: The Amuka...[The Depths]...North-Central Galil, Israel. Green, green Israel. (The change in the Muqata's color today is because JoeIrishSettler's been drinking too much leftover Purim whiskey)

Many readers of the Muqata know that one of the topics I really enjoy blogging about is trips around Israel. While I may have not posted about these trips for a while, I have photographed many of them quite extensively over the past few years in the hope that I'd get around to eventually posting them.

Today's your lucky day, as we explore the mystery of...The Underwear Tree.

Located in the rolling hills of Northern Israel, you have to go off the beaten path for your quest of this holy tree. 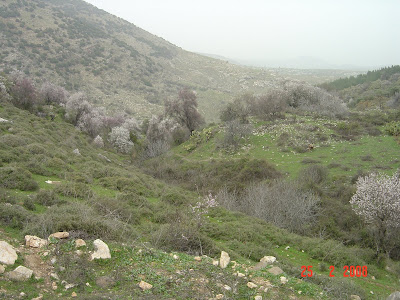 These photos were taken by me last year, as we approached the grave site of the saintly rabbi, Yonatan Ben Uziel. 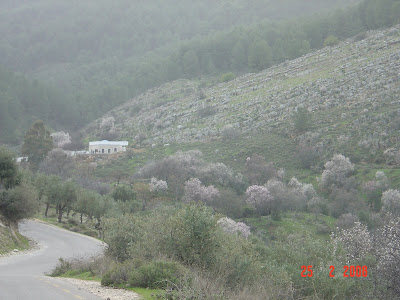 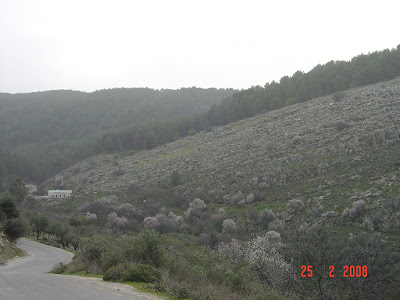 R' Yonatan ben Uziel, the greatest of the students of Hillel.

It was said that when R' Yonatan ben Uziel studied Torah, any bird that flew above his head would be burned up. Rashi explains that angles would hover above his head to hear his Torah study (thus the birds were incinerated by the angels), while Tosafot explains that his learning was intense like the fires at Mount Sinai when the Torah was given...) 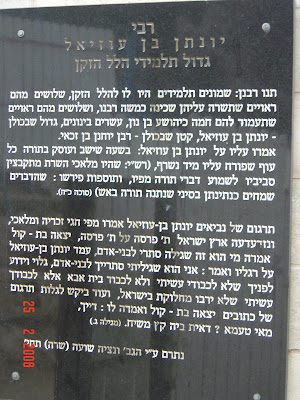 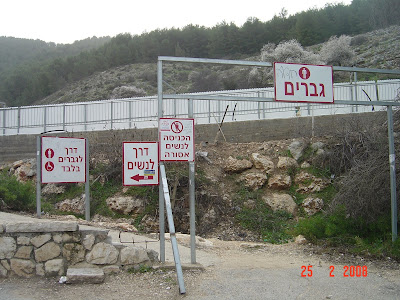 Its a long, long way to the entrance...not a chance you might accidentally see a female. 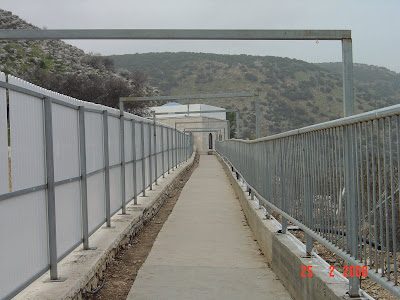 You enter the building and behold. The grave marker of R' Yonatan ben Uziel. 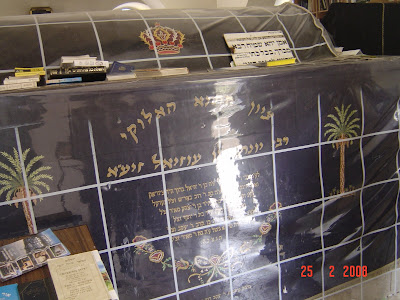 Friendly signs adorn the walls, like this one, located on a beaker of burning oil: 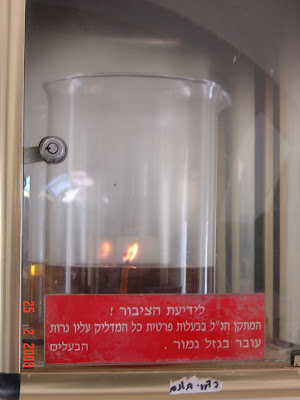 "To the attention of all: This contraption is private property. Anyone lighting candles atop of it is guilty of theft. --The Owners"

And so...the time comes to leave the building. The excitement grows, as we see the ominous sign, heralding our arrival at the hallowed spot! 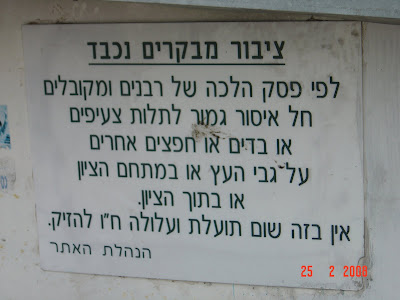 Esteemed Visitors
According to the halachik (Jewish law) rulings of Rabbis and Kabbalist mystics,
it is forbidden to hang scarves,
or clothes, or other items
on this tree, the gravesite,
or within the building of the gravesite.
There is no worth to it whatsoever...and it may even do harm [to you], G-d forbid.
--Site Management.
Yet that does nothing to stop women from adorning the tree with scarves, clothing or underwear -- they believe that hanging their clothes from this tree, will help them in their quest to find their shidduch, their life partner for marriage. 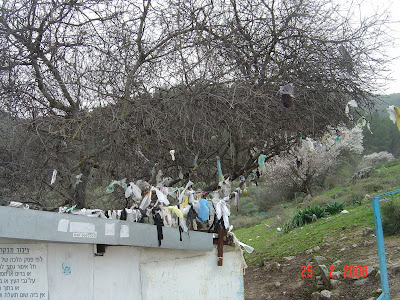 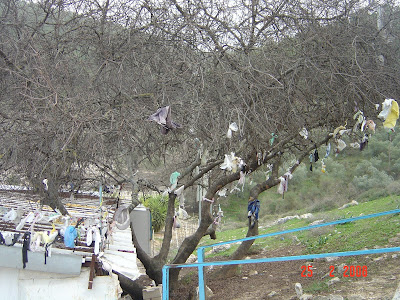 Don't believe me? How about the NY Times? Or the ancient bloggers of yore who discussed this issue years ago when it first made headlines?

The "Out of Step Jew" wrote about it. As did the Balabusta in Blue Jeans, Yo Yenta, and even Miriam from Bloghd (who moved up to the big leagues, and now blogs and reports for the Jewish Chronicle). DovBear weighed in as well back then in Dec 2005, which is the stone age of blogging...and he quoted the extremely venerable Mississippi Fred McDowel's "On the Main Line" blog on the same topic. [Updated]

And you thought I was kidding about this tree. It exists, and despite the dire warning sign, women still hang their clothes from this tree...hoping to meet their bashert, their partner for marriage.

(I should mention this to Laizy Shapiro as a plot idea for a srugim episode).

While the tree above is a totally Jewish in nature, there's also a Christian urban legend underwear tree near Laughlin, Arizona. Much less serious.

That's enough for now -- Tomorrow, I shall slay the agel dragon!

When I saw the title of this post, I immediately thought of "the tzitzit tree" (where our chevreh used to hang their tzitzit during frisbee games -- of course, after the game, all the guys would take back their tzitzit!)

The tree in this post is just an ugly eyesore! I am glad the rabbis condemn this polution.

What a very strange custom!!

Rivka: The chevra frisbee game on Fridays in Gan Sachar?

I am an ancient blogger of yore who also wrote about this in 2005
http://dovbear.blogspot.com/2005/12/unholy-undies-adorn-rabbis-tomb.html

YES! That would be a GREAT idea for an episode!

I would like to point out that Jews have no dog in the fight between the Irish (read Catholics who've hated the Jooooos for as long as they've been around) and the English. The Irish have been acting like west-bank arabs in their fight for the Northern tip of Ireland for a few hundred years, willing to kill innocents for "their" property. The Brits, are the architects of the Middle East mess with their creation of arab states that NEVER existed before the stinking english decided that the camel-jockeys needed to have kings to rule the land. Never mind that the limey boogers never bombed one set of railroad tracks to a concentration camp when they knew what was going on there. To hell with them both and take down that silly green, you're a Jew!

Jameel - I definitely believe you more than I believe the NY Times.

Insanity...but just a note I think it was Angels above his head not angles... (I was wondering 30 degree..right angles...)

PS I didn't know the word verification was hebrew...today mine is "gaveret"

Well, the times they are a-changin'. When I visited Amuka back in pre-(blogging-)history, the tree was relatively chaste, sporting only scarves. There was also a quaint custom of leaving a "forgotten" Tehillim or Siddur lying about with the girl's name, address and phone number inside the front cover, to make it easier to return...

Great post! The joke is that after they put up the fence the segula for shiduchim took a hit to.

David; it might be worth remembering that without the 'English' (read British), there might be no jews left.
They most certainly did what they could to help disrupt the Nazis murder camps including sending in agents and supplying partisans.
And lets face it, the middle east wasn't much better before the British created borders. Caliphates suck. Fact.
Your post is completely at odds with the subject, I for one think underwear trees are great but I thought I ought to point out that a bit of gratitude wouldn't come a miss.

Maybe instead of sepatate entrances and an underwear tree there should be a place for singles to meet and actually find their basherts.