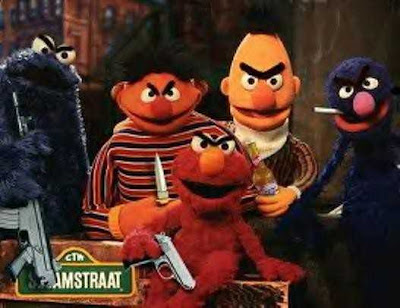 "His book "Primetime Propaganda" will show how the "most powerful medium of mass communication in human history became a vehicle for spreading the radical agenda of the left side of the political spectrum," according to the publishers HarperCollins.

Shapiro interviewed dozens of leading industry figures, some of whom admitted to including a left wing bias in their shows. The results showed "unrepentant abuses of the Hollywood entertainment industry" and how movers and shakers in the television world tried to "shape America in their own leftist image"

Sesame Street has previously been accused of being left wing. In 2009 an episode mocked Fox News. The segment showed the character of Oscar as a reporter for the Grouch News Network and had a viewer telling him: "From now on I am watching 'Pox' News. Now there is a trashy news show."

The Public Broadcasting Service ombudsman later said he "didn't know what was in the head of the producers" and that they should not tell people what to think "through the kids". (Telegraph)

Not news. It's been promoting the LW agenda for decades.

There have been reports that Bert was one of the individuals killed together with Bin Laden in his compound by the Maquis Seals commando team. These reports are unconfirmed; however, there have been no sightings of Bert since May 2...

I thought it was the Cookie Monster? Damn, I am just not up on these things nowadays....