I haven't gotten around to taking pictures of it, but I've noticed that this is becoming an epidemic.

I'm talking about graffiti in Jerusalem.

It's bad enough that the idiotic "Na Nach Nachman..." and "אז" garbage has defaced our city (and country) everywhere, but now the latest are the (ugly) "tags" some people are painting everywhere they can.

The light rail train stops are hardly a year old, and I don't believe I passed one without some idiot's tags defacing these brand new structures.

I was driving by Malcha as the train passed the other day, and one of the trains was completely defaced with really ugly graffiti - if they were going to paint up an entire train they could have at least done a nice job of it.

I've noticed there is a lot more meaningless graffiti on Jerusalem building than their used to be. And all of it ugly.

It's not like the guy who used to put electrical tape on the traffic lights so they would show smiley faces. That guy at least had a sense of humor.

And it's not like some of the beautiful murals that you can see in a few places. 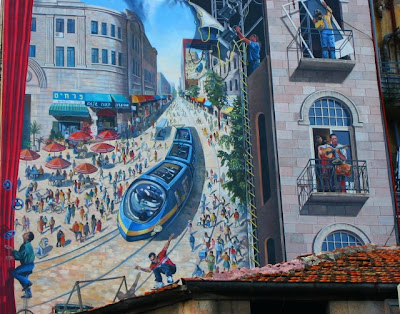 It bothers me that there is such disrespect and meaningless, ugly defacement of public property.

Nir Barkat, please pull a Giuliani and clean up the graffiti.

Well Jewish graffiti is in Hebrew, badly spelled or whatnot.

Also note that graffiti on stone cannot simply be painted over, it needs to be sandblasted or removed with a toxic solvent.

I also am not a big fan of those art school kids with their graffiti stencils. So you are proud that you can make a stencil that gives an nice profile of Begin? Then exhibit it in your school, not on the walls of the city.