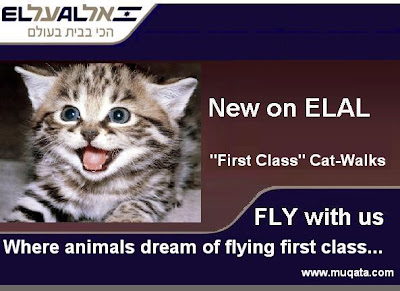 Translated from Kikar Shabbat...(the emphasis on class is theirs...not mine)

What could possibly surprise a first class passenger in EL-AL's luxurious, comfortable and quiet cabin? Perhaps a cloud or maybe an air pocket...that's what "S.A." thought when he purchased such a prestigious ticket for a flight to New York in January this year.

He was looking forward to the promised rest and EL-AL luxury because he was anticipating hectic business days prior to the trip. El Al boasts that their hyper-comfortable first-class seats are manufactured in France [known for its first class seats?], and the seats turn into fully flat beds to allow for rest and sleep during the flight.

Indeed, the passenger settled down in his first class seat and prepared to sleep to reinvigorate himself for the coming days.

While the passenger peacefully slept, a cat suddenly emerged from a lower class section of the aircraft, and in a wild, rancorous rampage, attacked the passenger. Even after the feline predator was caught, the passenger could not clam down nor return to rest or sleep.

His expensive first class investment proved a great disappointment. What made this debacle even more catastrophic, was that the it turned out that the cat belonged to a "tourist" class passenger and had made the long journey up to first class, unimpeded.

How can an animal be removed from it's cage against regulations? How could the animal have made the long trip possible from tourist class to first class without being caught? Why is there no barrier preventing an animal's entrance to first class? What does EL-AL have to say?

Upon his return to Israel, "S.A." penned an angry letter El-AL, describing the sequence of events and he received an apology call from El Al. However, "S.A." felt he had not received his money's value for the traumatic flight, and contacted his attorney demanding that EL-AL provide a compensatory first-class ticket to the same destination.

El Al refused to compensate him for the exceptional event.

"As explained directly to the applicant, according to airline regulations, passengers may fly accompanied by animals weighing up to 8 kg, while in a cage or bag adapted to them. Although we are careful to instruct the passengers that animals must stay in their cage or bag during the whole flight, one passenger on the flight in question, contrary to the guidelines, released the cat.

Upon seeing the cat's emergence from it's cage, the flight service crew immediately warned the cat's owner and told her to return the pet to its cage.

El Al apologized for the inconvenience and annoyance caused by the passenger."

A Cloud or air pocket? Maybe the cat also wanted to experience the grandeur of EL-AL's Royal First Class.
I don't believe the passenger was really attacked by a cat -- at most, it probably walked on him. Had he really been attacked, EL-AL would have offered him a quality waffle-maker.

Other quality EL-AL ads: In response to the Tefillin-bomber (not) 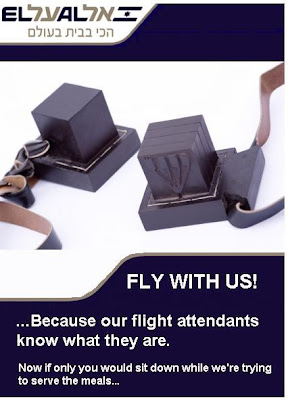 The classic "Personal Mechitza" ad, based on the following story. 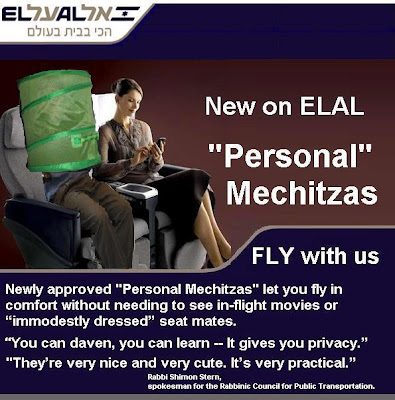 A cat is pretty much harmless unless you're allergic. I'd be very glad if I could hold a cat during a long boring airline flight.

However, he's lucky it wasn't a small dog, he probably would have had a heart attack out of fear. This is what happens when from people refuse to own pets.

My kitties are harmless.

A grown man frightened by a cat?

On El Al, they answer to a Higher Authority! :)

I can't even tell which of those ads are real and which are fake. WELCOME TO ISRAEL!

The airline is guilty here and should compensate the passenger, even if was only the cat walking into or onto the person. The airline should also sue the cat owner for these damages.